You are here: Home / Posts from Community / Riverside robotics team heading to national championship after regional win
Share this... 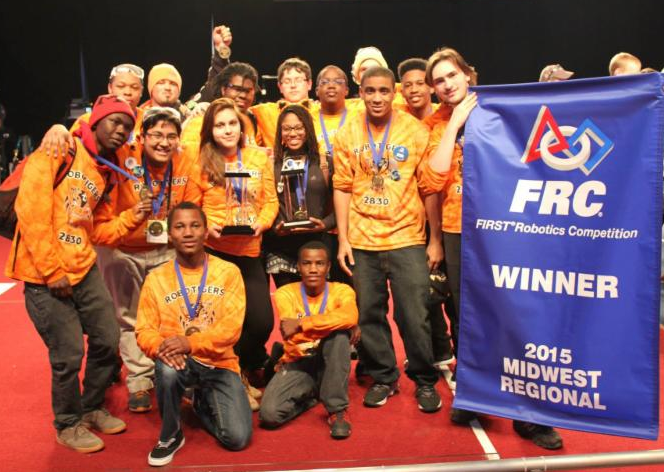 Riverside senior and “Robotigers” team member Matthew Beecher has dreamed about what he and his teammates accomplished since he was a 9-year-old student participating in robotics at MPS’ I.D.E.A.L. School.

“Knowing about the tournament for so long, and not just getting to go but also getting to compete – it’s absolutely great. I haven’t slept the last few nights,” Beecher said days after the regional win.

It’s been a long journey to the championship. Officially known as Team 2830, the Robotigers team is just six years old and has historically had just a handful of students. At past events, the team was regularly eliminated before the playoffs. This year was different. 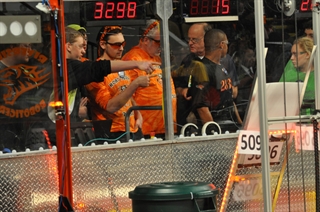 “To go from the team that no one really looked at to actually winning the competition, it was completely unbelievable,” Beecher said.

He thanked the team mentors and Riverside teacher advisor Chris Levas for their support – and believing they could win.

Levas said competing teams do not often expect much from a Milwaukee Public Schools team. He is proud the Robotigers showed them wrong.

“Next to my daughter’s birth and my wedding, it was probably the best experience of my life,” Levas said. “It was just phenomenal to see.”

Levas along with mentors from GE Healthcare and Rockwell Automation and student mentor Erik Orlowski from the University of Wisconsin-Milwaukee spend countless hours after school hours supporting the team. Students themselves are often at the school for six or more hours after the bell rings working on their robots. The team is also supported by Harley-Davidson Motor Company, the Milwaukee School of Engineering and local philanthropist George Mosher.

Team sponsors, the school, the Riverside University High School Foundation, Tri-City National Bank, MPS and individual donors through a gofundme page are funding the trip to the championship.

The Robotigers won the regional competition after building a robot over the course of six weeks that can successfully compete in this year’s themed competition: Recycle Rush. Two alliances of three robots each stack containers and place “recyclables” into the bins.

Levas said the program is one of the most powerful he has seen in his 11 years of teaching.

“It’s getting kids not just to understand science and engineering and physics concepts – it’s all wrapped up in a giant, hands-on project. It’s problem solving,” he said.

The joint team – Team 1675 – won recognition at the Chicago tournament for the design of its robot, earning the Industrial Design Award, sponsored by General Motors. Students from Dominican High School in Whitefish Bay are also a part of Team 1675, in addition to MPS students.

Riverside’s team was one of just three teams among the 54 at the Chicago competition to earn a spot in the national competition in St. Louis.