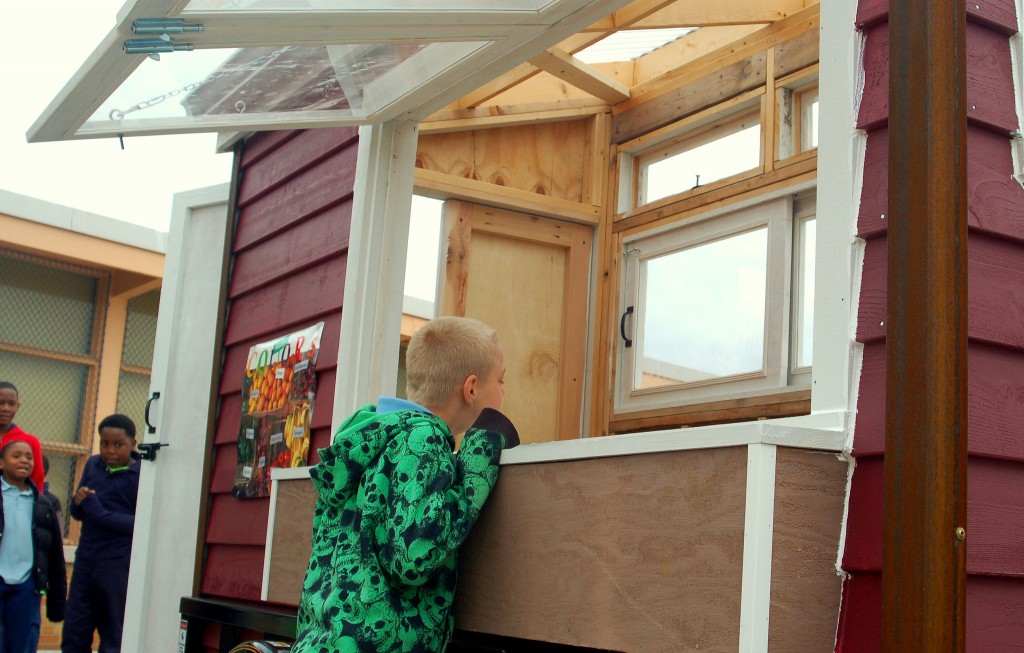 A Milwaukee Environmental Sciences student checks out the new greenhouse trailer, which will be used for growing seedlings and as a mobile marketplace. (Photo by Molly Rippinger)

Students at Milwaukee Environmental Sciences (MES), an MPS charter school at 6600 W. Melvina St., kicked off their Earth Day celebration with a first glimpse of their new, mobile greenhouse.

“This is awesome,” said a group of fourth graders as they walked up to the greenhouse hitched onto a trailer. The plan is for students to use the trailer for growing seedlings, which will be planted in raised garden beds at MES, and as a mobile marketplace.

Doug Janssen, who teaches fourth and fifth grade at MES, explained that the mobile greenhouse is an opportunity for hands-on learning and to provide a service for the community. “There are no farmers’ markets in this area to buy fresh food at a reasonable price,” he said.

The vegetables, herbs and spices that are not sold will find other uses, such as the lunchroom’s salad bar or as ingredients in fresh salsa made by the students.

Arts @ Large, a Milwaukee-based initiative emphasizing experiential learning and strengthening school communities through the arts, was key in developing the mobile greenhouse. The project is one facet of Arts @ Large’s three-year commitment to MES. Other projects have included installation of a water catchment system and a floor-to- ceiling mural in the front hall illustrating environmental themes such as urban agriculture and energy consumption. 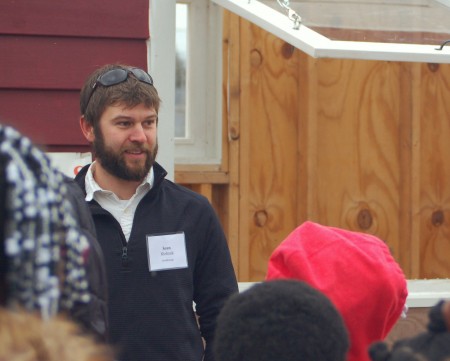 Sean Kiebzak, site coordinator for Arts @ Large, explained that the initial idea for the greenhouse trailer stemmed from the Wormfarm Institute, a nonprofit based in Reedsburg.

In its efforts to integrate culture and agriculture, the Wormfarm Institute began building roadside “culture stands,” which are mobile farm stands designed by local artists. “The whole idea behind it was to create mobile markets where individuals and entrepreneurs can have a space in which they can sell their goods,” said Kiebzak.

Kiebzak explained that an area artist will be brought into MES to work directly with the students to beautify and personalize the mobile greenhouse.

“I think the trailer is nice, but we just need to put a little color on it so it will pop out,” said Janaya Cotton, a fifth grader at MES. Cotton hopes to incorporate leaves and other environmental elements into the design.

MES students have been involved with the mobile greenhouse for months, making suggestions for the design and learning about the history of culture stands.

Linda D’Acquisto, professional development specialist at Arts @ Large, works with the MES teachers to incorporate art projects that align with the curriculum.

As an example, she mentioned a water catchment system installed by Reflo, a nonprofit specializing in sustainable water use and green infrastructure. Rainwater from the roof is diverted to a drainpipe made from clear, PVC tubing. The pipe is visible inside a MES science classroom where students can use a spout to collect and analyze rainwater samples.

“During a rainstorm, students can actually watch the water running off of the roof and through the piping,” said Kiebzak. The rainwater then flows into a cistern where it can be used to water the gardens.

The water catchment system illustrates the Expeditionary Learning model embraced by MES, which emphasizes hands-on projects for an in-depth understanding of topics.

MES opened in 2013 as a kindergarten through fifth-grade elementary school and is a year-round, non-instrumentality charter, meaning the staff members are not MPS employees and the governing board is independent. Each year the school will add another grade level until it reaches reach 12th grade.

The charter school was established by the Milwaukee Teacher Education Center (MTEC), a nonprofit professional development center promoting teacher-training programs that allow educators to work toward certifications while on the job.

Arts @ Large, which began in 2001, has been involved with MES staff and students since the school first opened. Each year, Arts @ Large brings about 100 area artists into local schools.

For Kiebzak, finally seeing the culture stand at MES is an exciting moment.

“I’ve wanted to do a culture stand for a while,” he said. “After learning about it, I knew we needed to do something like this because it’s so artistic, it’s so innovative and it’s such a great idea. I was just waiting for the right school to come up with a vision where they would use something like this.”