You are here: Home / Home / Carousel / Officials look to state for answers on sex offender residency
Share this... 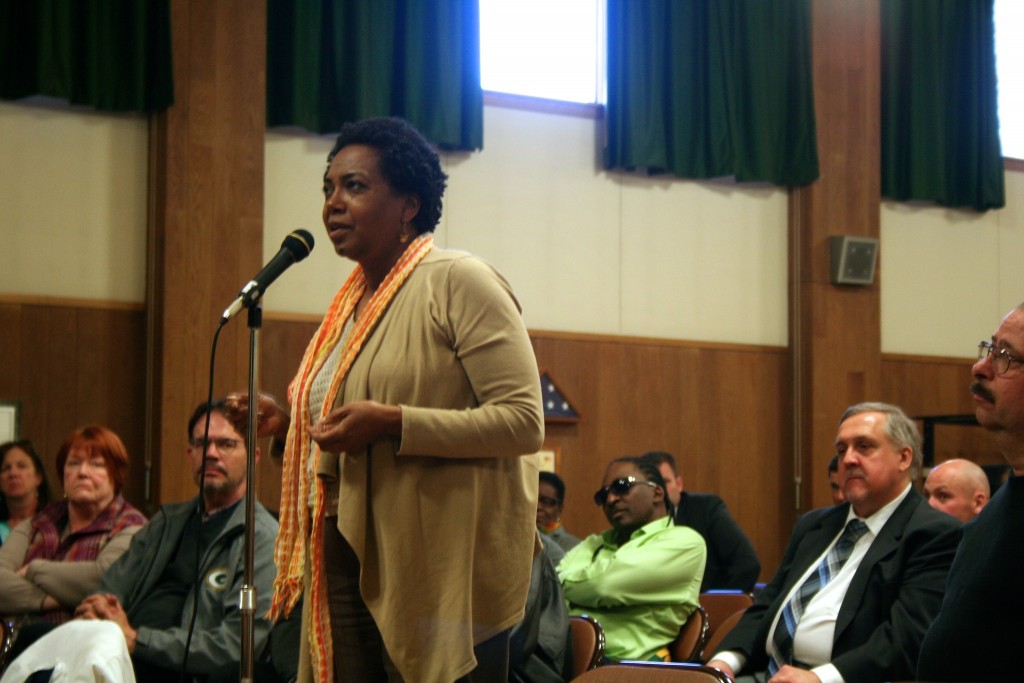 Richard Rosa’s brother, Raymond, is one of a number of former sex offenders facing an uncertain future because of an ordinance passed by the City of Milwaukee Common Council last fall that severely limits where individuals convicted of a sexual offense can live.

Raymond Rosa, 48, was convicted of second degree sexual assault in the case of a 15-year-old friend of his daughter in 2005. Rosa received a 12-year sentence, consisting of seven years of imprisonment and five years of extended supervision. Rosa was released in 2012 and, after failing a drug test, ended up on a list of offenders wanted by the Milwaukee County Sheriff’s Department in late 2013.

At that time, Raymond had been working as an electrician’s apprentice for two or three months after some schooling through WRTP/BIG STEP, Richard said. He has, most recently, served about 15 months at Jackson Correctional Institution in Black River Falls but is set to be released at the beginning of June and is facing the prospect of living in his van.

“He called me a month and a half ago and he said, ‘Rich, they’re trying to kill me,’” Richard Rosa said, referring to the effects of the new ordinance. “He’s scared.” 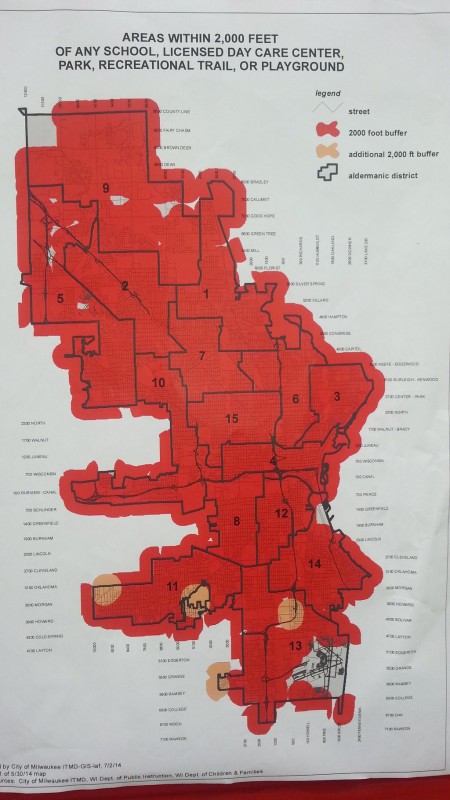 The ordinance, which restricts sex offenders from maintaining a permanent residence less than 2,000 feet from a school, day care, park, recreational trail, playground or “any other place designated by the city as a place where children are known to congregate,” leaves precious few areas where sex offenders who are released from prison can legally reside on a permanent basis. The 2014 legislation came in response to similar ordinances restricting where sex offenders can live in all 18 other municipalities within Milwaukee County.

A recent panel discussion of the ordinance at the Washington Park Senior Center addressed what some called the unintended consequences of the legislation. Mayor Tom Barrett, Common Council President Michael Murphy, Wisconsin Department of Correction Region 3 Chief Niel Thoreson and Capt. James Shepard who commands the Sensitive Crimes Division of the Milwaukee Police Department, participated on the panel.

Murphy, who opposed the legislation, said he understands the concerns of some of his colleagues who felt Milwaukee was becoming a “dumping ground” for sex offenders in the county. Murphy said a 2014 analysis of DOC data by his office showed that of sex offenders living in the county in 2007, 89 percent resided in Milwaukee.

Thoreson, whose office is responsible for monitoring offenders in Milwaukee County, said this issue is not limited to the state’s largest city. Thoreson said the cities of Waukesha, Racine, Kenosha, Green Bay and Madison also shoulder the heaviest burden when it comes to housing sex offenders in their respective counties.

Because of this, Thoreson said he’s optimistic state legislation will result, but he’s also fearful of what that legislation might look like. He said, “I don’t want a statewide solution to be more draconian than what we’re dealing with now, meaning we don’t want to make it more difficult and drive more of these individuals underground.”

Attempts to address the question of where sex offenders should live have surfaced at the state level with bills introduced to the state assembly in 2005 and 2009; both pieces of legislation failed to pass. Barrett, who signed the 2014 ordinance, said inaction on the part of state legislators made the Milwaukee residency restrictions necessary.

“These are individuals who have violated state law, are being prosecuted by state district attorneys, are often represented by state public defenders, appear before state judges, are placed in state institutions and, then, at the very end, it’s a local issue? That’s why we need to have a statewide response,” he said.

“We can’t track them”

During the panel discussion, Thoreson dispelled a number of myths when it comes to the perception of sex offenders and their behavior. Among them are that former offenders assault strangers, find victims in public places and never change. In reality, he said, 93 percent of sexual offenders had not previously been convicted of a sex crime, most victims are known to the perpetrator through a friend or acquaintance and treatment rooted in evidence-based principles “can have a pretty significant effect when it comes to reducing recidivism.” Nationwide, only 5.3 percent of sexual offenders re-offend within three years of their release.

But the reality remains: people, especially parents, don’t want a convicted sex offender for a neighbor. “What if a sex offender lived next door? How would you feel?” said 15th District Alderman Russell Stamper after the discussion. “That’s what you’ve got to ask yourself.”

In theory, these ordinances protect children and families by not allowing potentially dangerous individuals easy access to children. In practice, however, a 2007 Minnesota study on sex offender recidivism found, “very little support for the notion that residency restriction laws would lower the incidence of sexual recidivism, particularly among child molesters.” In addition, anecdotal evidence suggested residency restrictions also “limited offender employment prospects, reduced suitable housing opportunities, and threatened the reliability of the sex offender registry by causing more offenders to become homeless.” Restrictions also cause offenders to give fake addresses or change addresses without notifying authorities.

Five units in DOC are responsible for supervising sex offenders. The goal of these units is to prevent additional victimization by focusing on risk reduction based on the individual’s behavior, not his or her offense, according to Peter Marik, one of the five corrections field supervisors for the DOC in Milwaukee. Depending on a particular individual’s level of risk, the DOC uses controls such as GPS (location tracking), polygraph tests and home visits, often at unusual and unscheduled hours, to keep offenders accountable.

Certain factors, including how old the person was when the offense was committed and how many people were victimized, contribute to the assessment of risk. Marik also noted that whether the individual has recently used drugs or alcohol, lost a job or lost a home can increase the risk that a sex offender will reoffend.

Thoreson quoted testimony given before the Wisconsin State Assembly in 2010 by Dr. Anna Salter, one of the nation’s foremost experts on sex offender supervision and treatment, in illustrating this point.

Salter, who also consults with the Wisconsin DOC, said, “My concern with residency restrictions is that both my clinical experience and the research say they put children at more risk, rather than less. They destabilize offenders without offering any protective effect. They, ultimately, reduce the number of sex offenders who are supervised and monitored and increase the number who are unseen, unknown and free from oversight.”

Shepard, whose department has the responsibility of enforcing the residency ordinance, confirmed that the law makes his job “a lot more difficult.” In addition to inflating the number of apparent violations — out of 300 potential violations his department investigated, only 80 of those cases were “truly in violation,” he said — the ordinance makes it almost impossible to track sex offenders, whether they’re on supervision or not, and only gives the appearance of safety.

“Although they’re not there on paper, they’re still there in those areas but we’re unable to see them,” Shepard said.

“Where should they live?”

Murphy said recently a realtor called him on behalf of an individual who was convicted of a sexual offense eight years ago, wondering whether that person was able to buy a home in the city.

“If you look at the map, he could buy a home right next to the airport,” Murphy said, adding that it would depend on the person’s offense.

He noted that everyone is talking about where sex offenders shouldn’t live rather than where they should live. “That question’s not being asked by anybody,” said Murphy.

“I really think that the idea of going back home makes sense,” Thoreson said.

But, if that locality has residency restrictions, it’s likely the individual will end up homeless within that municipality. In fact, Thoreson said DOC has “already had that happen multiple times.” Responding to a question about placing offenders in other states, Thoreson noted that an “interstate compact” among all 50 states outlines the rules, regulations and procedure for transferring sex offenders from their home state. If an offender wants to live in another state, that state has the right to refuse. The interstate agreement came as the result of “heinous and sensational” crimes committed by sex offenders on active supervision in states that were not aware of their presence, he added.

Now that the ordinance has been in effect for some time, Thoreson said the DOC has received letters from inmates who are nearing the end of their sentences expressing apprehension at the prospect of being released with nowhere to go. That’s cause for concern because the six months before release are crucial, said Thoreson, and the DOC wants offenders thinking about what they’re going to do when they’re released so they don’t end up back in prison.

Regardless of the intentions, that’s what’s happening. Because of this, Richard Rosa said his brother actually asked the DOC to forgo the “privilege” of finishing his sentence out of prison.

“He wants to stay there because he’s got a bed, he’s got a routine, he’s got food,” said Rosa. “They’re forcing him to come home to live homeless.”

Celia Jackson, a Milwaukee resident and executive director of the International & Intercultural Center at Alverno College, commented that when it comes to talking about sex offenders, race, crime or “a whole host of social issues,” it is fear “that keeps us from having really authentic conversations.”

Jackson questioned whether looking to the state for a solution is the best course of action, suggesting the possibility of cooperation among municipalities in Milwaukee County. Either way, she called on officials to stop “shifting the blame or the responsibility,” adding that we have a responsibility to everyone in our community to find a solution.

She said, “We can just continue to vilify [sex offenders] … but that doesn’t make us safer.”