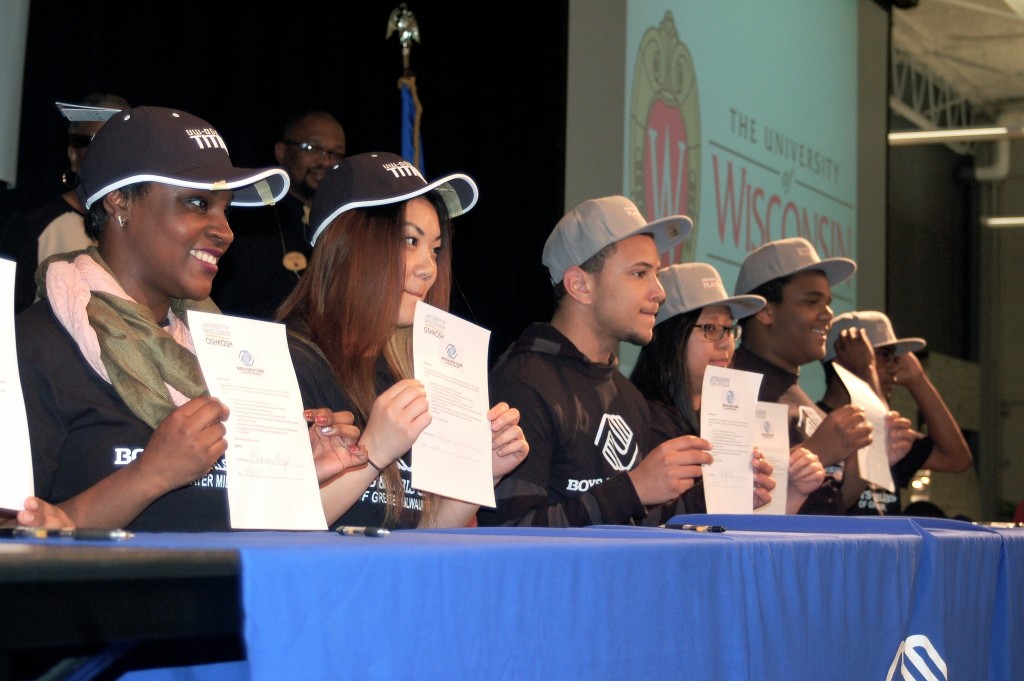 Students hold up their college letters of intent at the second annual college signing day. (Photo by Molly Rippinger)

Teachers, mentors, families and friends filled Champion’s Hall at Direct Supply, 6663 N. Industrial Road, with a festive energy. “Culturally we celebrate athletes this way, but we thought it was important to celebrate academics,” said Rebecca Ehlers, director of marketing and communications at the Boys & Girls Clubs.

Students were called up to the stage where they signed a college letter of intent, donned a ball cap from their new school and posed for pictures, all while the Paradigm Drumline kept the energy high with upbeat percussion riffs. “There was no drumline when I signed my letter. But this makes it such a fun party,” joked Ehlers. 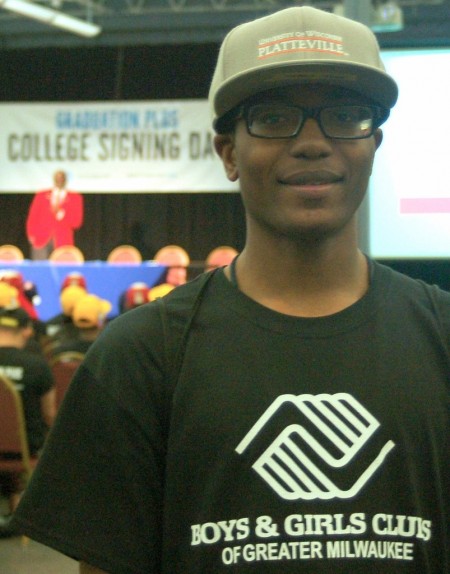 Jesse Jones Jr., recipient of the Marquel Pollard scholarship, has been involved with the Boys & Girls Clubs of Greater Milwaukee for the past 13 years as a youth, a volunteer and an employee. (Photo by Molly Rippinger)

“It’s important to acknowledge our students,” said Andre Douglas, program manager of Graduation Plus, which focuses on college preparation and mentorship at the Boys & Girls Clubs. “We want to teach them early enough that you need to learn some accountability. College signing day allows students not just to be celebrated, but to also know ‘this is what I am signing, this is what I am agreeing to for the future.’ ”

Jesse Jones Jr., recipient of the Marquel Pollard scholarship, was one of the students being celebrated. Jones has been involved with Boys & Girls Clubs of Greater Milwaukee since he was 5 years old. “I’ve been helped every step of the way,” he said.

Jones has been involved with numerous programs at the Boys & Girls Clubs over the past 13 years, but he said that the Stein Scholars College Access and Success Program, an individualized approach to academic advising and college preparations, was critical during the application process.

“They helped us with everything for college. We’ve done our letters early, we’ve gotten into college early and we’ve signed up on time,” said Jones, a student at Milwaukee Academy of Science. “We’ll all get through college with their help.” Jones will attend University of Wisconsin-Platteville in the fall.

Ehlers emphasized that the Boys & Girls Clubs staff is dedicated to seeing the students succeed through college. “We don’t just stop when they get into college,” said Ehlers. “There are a lot of possible obstacles so we don’t just say, ‘Good luck.’ No, we’re with you along the way.”

The college letter of intent includes the following terms: to enroll in six to 12 credits during the fall 2015 semester, maintain at least a 2.5 GPA, have 95 percent attendance in all courses, complete assignments by due dates, participate in student organizations and activities, remain connected to Boys & Girls Clubs of Greater Milwaukee through volunteering and to graduate.

Before each group of students signed their letters, they were told, “Please, proceed to your future.” Many of the seniors are first-generation college students and collectively they were offered nearly $3.3 million in scholarship funds.

Alethia Tilford, a senior at Ronald Wilson Reagan College Preparatory High School who was selected for the prestigious U.S. Presidential Scholar Program, did not take the act of signing the letter of intent lightly. “College signing day is not just signing a piece of paper, it is an agreement that we will continue to be successful for ourselves and our communities,” she said to the crowd.

Tilford was one of 141 high school seniors in the country to be recognized as a Presidential Scholar, and she will join fellow recipients in Washington, D.C. where they will be honored at the White House.

“Never forget the goals and expectations we set for ourselves,” said Tilford. “We are the example and the world is watching.”

Jazzmyne Anderson and Brent Adams, both graduates of Marquette University, were at the event to support K.J. Tatum, who will attend Marquette in the fall. “Having a support base like this when going to college is great,” said Adams.

“This gets them serious and solidifies what college is about,” added Anderson. “Seeing kids like this lets you know there’s hope for our community, especially if they stay here in the greater Milwaukee area.”