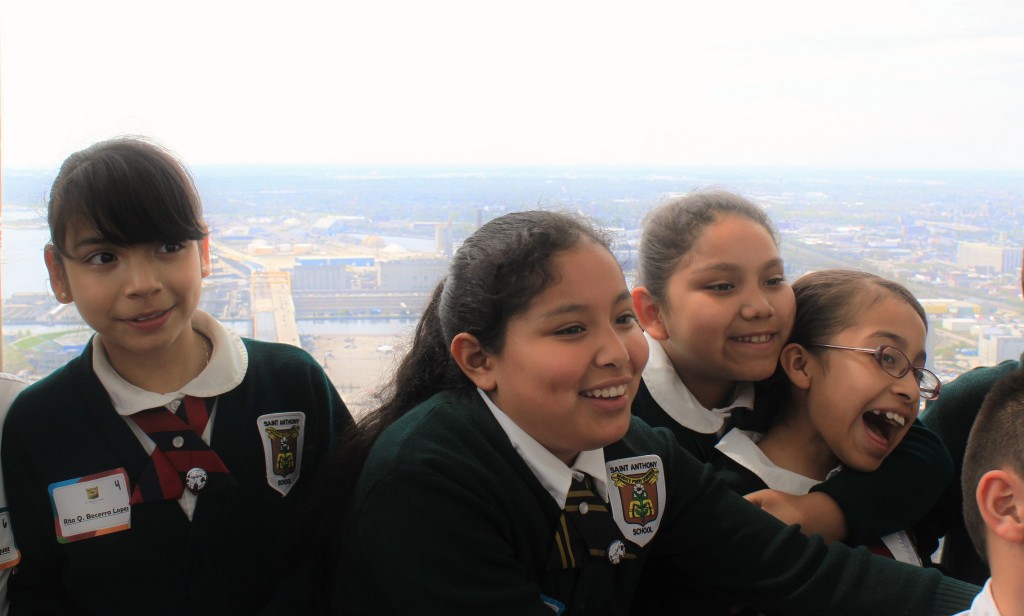 Shouts of “Oh wow!” “Look at that!” and “Can I see my school from here?” filled the sky deck of the U.S. Bank building downtown as groups of third-grade students from five central city schools attended the All-City Young Authors’ Summit sponsored by the SHARP (Student Historical Art Resource Program) Literacy Book Project.

The half-day event marked the culmination of a seven-month program that taught students about the city’s diverse history and multicultural makeup.

The program was designed to broaden the students’ perspective of the city and their sense of exploration by teaching them about their home and school, and then about their block, neighborhood and city, according to Adam Carr, program director of the All-City Young Authors’ Summit. Students completed a course of study that included exploring their neighborhood and describing it through art projects and short reports. 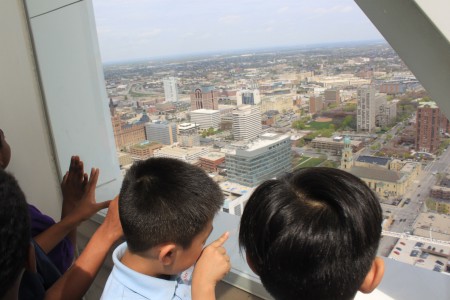 The initiative included students from St. Anthony School of Milwaukee and Forest Home Avenue School on Milwaukee’s South Side, and the Business and Economics Academy of Milwaukee (BEAM), Richard Kluge Elementary School and Hmong American Peace Academy to the north.

The bird’s-eye view atop Milwaukee’s tallest building set the stage for students — many of whom have limited opportunities to travel outside their own neighborhoods — to meet each other for the first time. After mingling and experiencing the view during one of the city’s rare clear, sunny days, the students moved to a conference room to get together in small groups. Every group included students from each of the five schools, who talked about their neighborhood and the people and history that make it special.

“I liked everything we learned,” said Sylvia Vera Villanueva, 9, from St. Anthony’s. Then she added with a smile, “It was great going to the top (of the building) and seeing everything!”

Several guest speakers addressed the students, including Mayor Tom Barrett, Lt. Ray Banks of the Milwaukee Police Department, Judge Derek Mosley and Megan McGee, executive director of Ex Fabula. The mayor shared some little-known facts about Milwaukee with the students. For example, he recounted that when city hall was built, the surrounding area was a swamp and the building’s foundation rests on 2,000 logs. Banks discussed safety and the importance of staying away from gangs, drugs and guns.

In a city known for its stark racial divides, SHARP Literacy President and CEO Lynda Kohler hopes programs such as this one can set the stage for a future with more acceptance and understanding. “Having them meeting like this to understand each other’s culture can help tear down barriers early in life,” she said.

Lessons and exercises from the program’s curriculum along with examples of student work are being assembled into a book that will be published later this year for use in third-grade classrooms. It will focus on the theme of exploring neighborhoods and the city as a way of building greater awareness of the world and enhancing cultural understanding, according to Carr.

Ashley Schultz, who teaches at St. Anthony’s, said the program made a difference for her students. “Getting them to see different things about the city is positive,” she said. “It opens their minds and makes them wonder more.”