You are here: Home / Neighborhoods / North / Amani / Public Allies members join We Got This in mentoring young men
Share this... 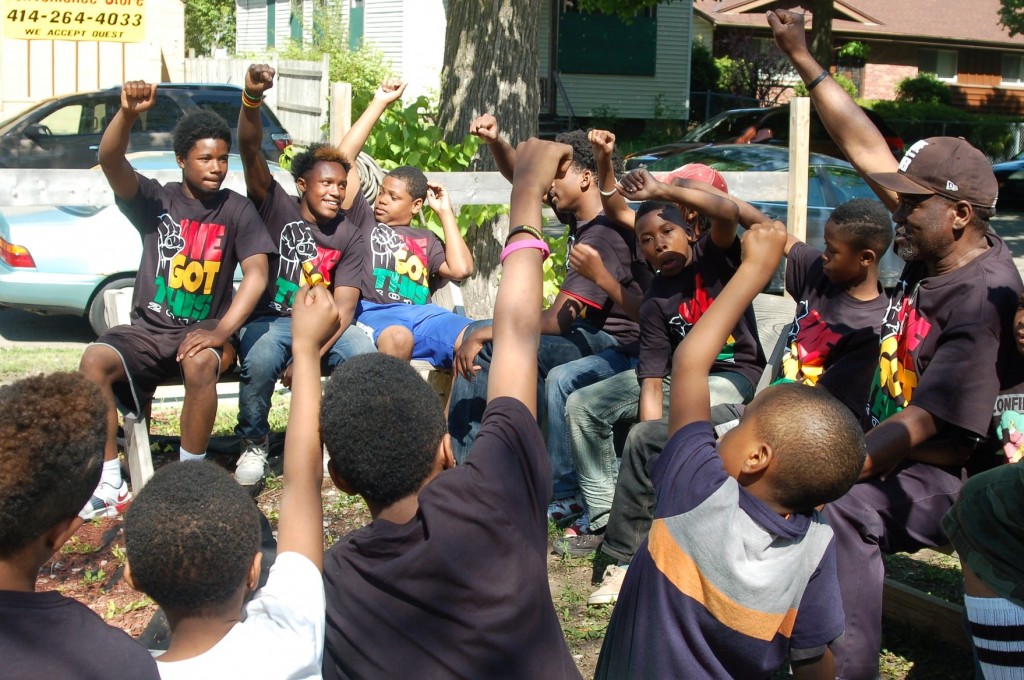 Young men respond to Andre Lee Ellis (right), founder of We Got This, at the group’s first summer meeting of the year in the garden at 9th and Ring streets. (Photo by Andrea Waxman)

The elementary- and high school-age boys started straggling into the garden at the corner of 9th and Ring streets at 6 a.m. on Saturday. By 8 a.m. the sun was shining and there were more than a dozen boys and some adults weeding and cultivating the soil in the plant beds where they will grow vegetables all summer.

The program, dubbed We Got This, started last summer with founder Andre Lee Ellis helping one boy who was headed for trouble. By the end of the summer, 100 boys and teens had found their way to the garden, where they are paid $20 for their Saturday morning work. 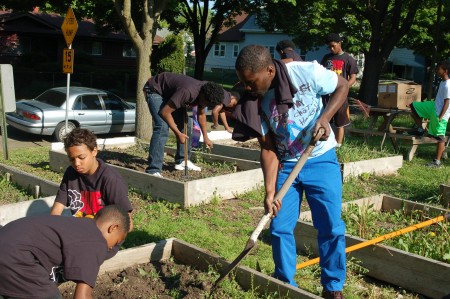 Trevis Hardman (in white T-shirt), 22, who grew up across the street from the garden at 9th and Ring streets, works with the boys. (Photo by Andrea Waxman)

This year, mentors from Public Allies are joining the effort. When they started working in Milwaukee neighborhoods last fall, they quickly picked up on the buzz coming from Borchert Field. A number of Public Allies alumni were already involved in Ellis’ mentoring and employment program for neighborhood youth.

The team of six Public Allies assigned to Borchert Field contacted Ellis and asked how they could help. They have been meeting with Ellis for four or five months and helped with a neighborhood cleanup in the early spring, said team member Dakota Hall.

“We’re interested in this because it’s a positive thing in (the) 53206 (ZIP code) dealing with young black males and all the problems that are facing them right now,” added Hall.

Ellis and Public Allies share a core value of building on a community’s strengths by focusing on its assets rather than its problems, said Ava Hernandez, executive director of the Milwaukee Public Allies organization.

Ellis would like to expand We Got This to 500 young men this summer. Because each of the 40 allies also works in a nonprofit, school or community organization, their network includes thousands of young city residents who they can encourage to join the initiative. Hall said they also would like to inspire other neighborhoods to start their own gardens. 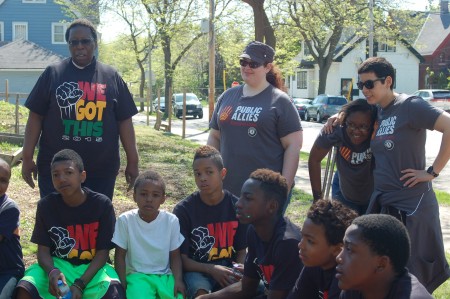 Members of the Public Allies are participating in We Got This as a service project. (Photo by Andrea Waxman)

“This has helped me a lot, kept me out of trouble, kept me in school doing the right thing,” said Rikishi Brown, 15. “I like the money but I really like helping in the community. … We are happy and we like doing this.”

Though school won’t be out until June 13, some of the young men are ready to get back to doing the community work Ellis paid them for every Saturday morning last summer. But “it’s not really about the money,” said Trey Jones, who is also 15. “It gives us something positive to do.”

Ellis is pleased to involve the Allies, who offer grassroots help and bring great organizational skills, he said. “Public Allies got in touch with me regarding the program and I saw (that the) fit was really good.”

“I would love for them to become leaders and counselors to the young people, sharing … how they got to where they are,” Ellis said. Noting that the young people who are now Public Allies became leaders by making certain choices, he added, “We want the young men to know that everywhere they look there’s options.”