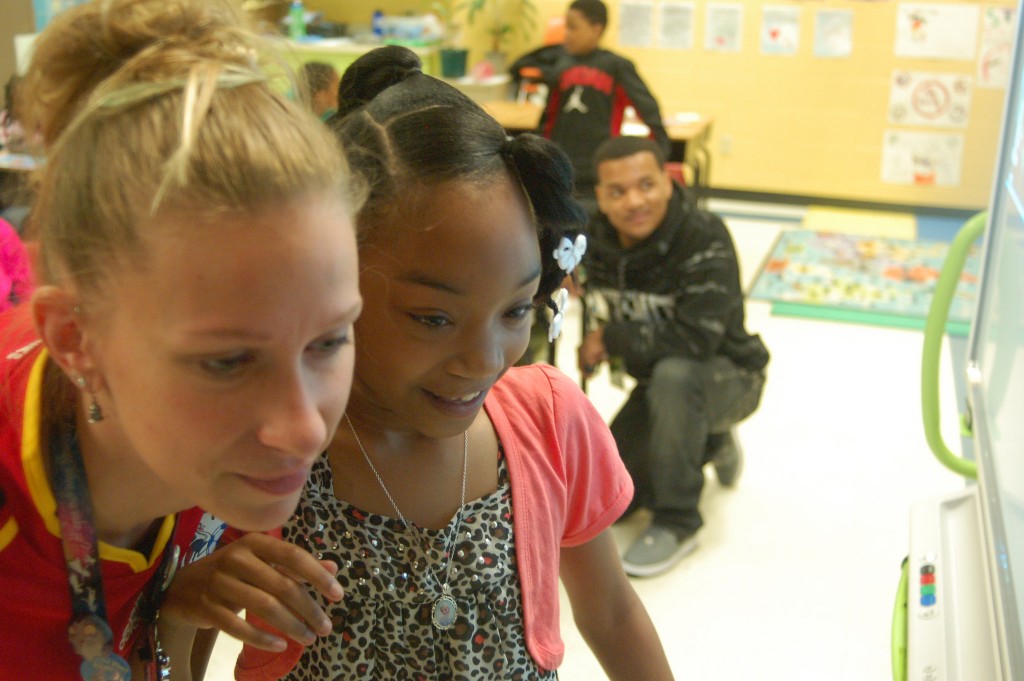 Mia Hunt, 8, is excited to see the Ugandan students’ faces on Skype as Laura Kolar looks on. (Photo by Andrea Waxman)

When Donovan Cole was a student at Gwen T. Jackson Early Childhood and Elementary School, then called 21st Street School, his class exchanged letters with students at Marquette University just a few miles away. Now, his second-grade daughter Tracy, a student at the same school, is communicating with students in Nabulagala, Uganda.

“It’s real cool to be talking with kids from a whole other country … Before this, I’m quite sure Tracy didn’t even know Africa exists,” Cole said.

In addition to studying a map and learning how to do research on everyday life in Uganda, the students are exchanging letters and recently communicated using Skype, which allows people anywhere in the world to see and talk to one another. The Milwaukee students, who have been grappling with the issue of bullying, are also discussing this difficult topic with the Ugandan youth. 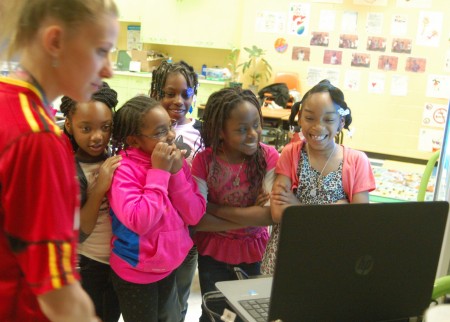 “(These second-graders) understand that (Uganda) is not only jungle, that there are cities. They know that the kids there have cell phones and computers and don’t live in huts,” said Laura Kolar, the paraprofessional in Ulisses Molina’s second-grade class at the Gwen T. Jackson School, 2121 W. Hadley St.

The connection between Milwaukee and Nabulagala was made in December 2011, when Kolar traveled there to teach dance through a nonprofit organization that brought in artists to work with local students.

A week after Kolar’s arrival in what she describes as a slum outside the capital city of Kampala, the nonprofit suddenly dissolved. Unable to abandon the students with whom they had instantly fallen in love, Kolar and a friend started a new nonprofit, Gujja Ting African Art, to fill the gap.

Kolar, 27, who now runs the nonprofit by herself, raises funds by selling paper bead jewelry the Ugandan students make and by soliciting family and friends as sponsors who “adopt” students. Gujja Ting offers weekly workshops in African, contemporary, tap, and break dance; drawing; painting; crotchet; and paper bead making. The students also interact with the children at Jackson school. 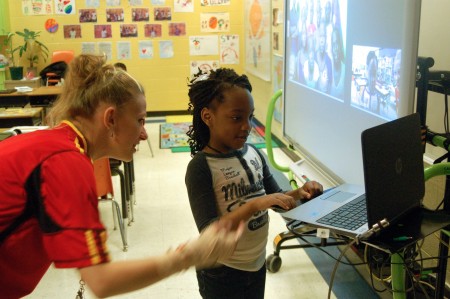 Tracy Cole, 8, listens to Brian, her Ugandan pen pal, as Kolar stands by to help. (Photo by Andrea Waxman)

As the Skype connection flickered in and out, second-grader T’nija Crockett introduced herself to a Ugandan student and asked, ”What is bullying to you?” The student replied in English, “Bullying is when someone is disturbing someone else.” T’nija responded, “I think bullying is when a big kid picks on a little kid.”

In a letter to a Ugandan student named Brian, Tracy Cole wrote, “I think bullying is when you are bothering someone over and over again and they tell you to stop and you keep on going.”

According to Cole, who visited the class to observe the Skype session, “Tracy’s taking more from this project than just learning to deal with bullies and learning about another country.” It’s making her think about people whose lives are harder and causing her to feel grateful that she has free schooling and more than one or two meals a day, he added.

Former Artists Working in Education (A.W.E.) program director Mary Osmundsen, who attended several Skype sessions between Milwaukee students involved in A.W.E. programs and Kolar’s Gujja Ting students, noted that it was powerful to see isolated central city students connect with young people on the other side of the world.

It’s difficult for students in such far away places to imagine what it’s like for each other and “so many misperceptions were broken,” Osmundsen said. “The kids from Milwaukee were really surprised that the kids in Uganda had cell phones but didn’t have any running water.”