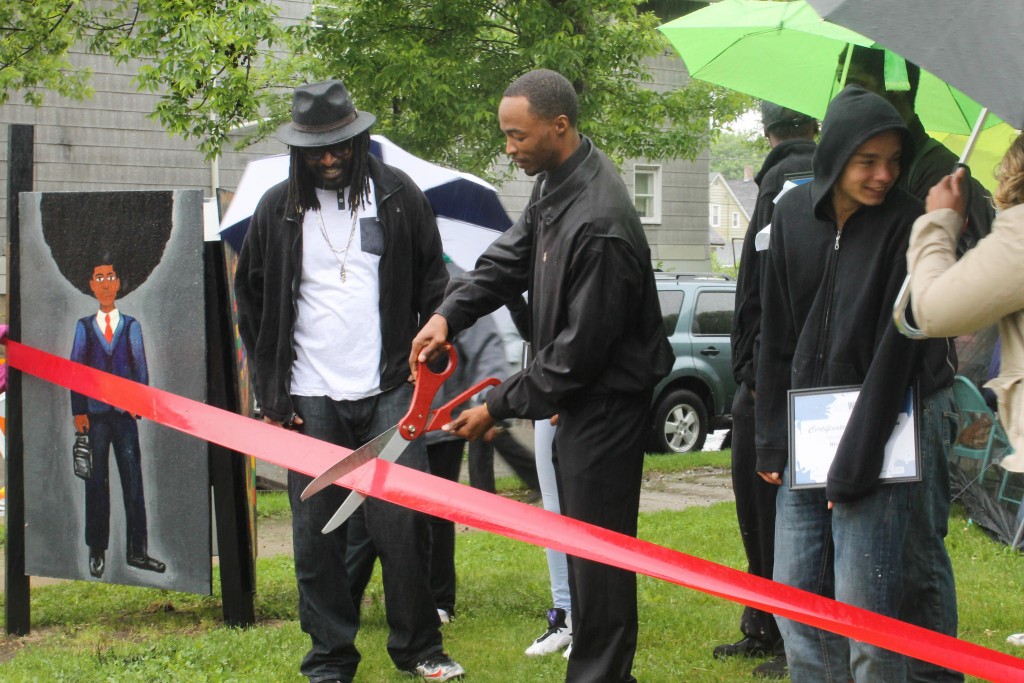 Even before the Rays of Sunshine garden at 24th Street and Keefe Avenue was officially unveiled, neighbors walking by were struck by seven paintings standing several feet tall on red wooden legs and sporting brightly colored messages of peace, justice and solidarity. The art pieces, which border the garden, were painted by four young artists who are part of ArtWorks for Milwaukee’s internship program.

The day before the ribbon-cutting ceremony, Antoine Carter, manager of Groundwork Milwaukee’s Urban Gardens program, noticed an elderly woman walking through the garden. Intrigued by the new artwork, she examined each piece carefully. Soon after, she began enthusiastically pulling people from the sidewalk to examine the paintings with her, taking special care to discuss the meaning and purpose of each.

Carter, a lifelong Franklin Heights resident, was excited to see that the murals were already doing their intended purpose: bringing community members together and starting conversation. 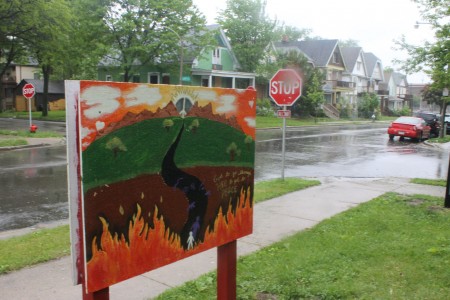 Designed by Keano Avery, this painting is one of seven now on display in the Rays of Sunshine garden. (Photo by Madeline Kennedy)

“It may seem small, but I think a project like this is exactly what the neighborhood needs,” said Carter. “You see a lot of art being done for the community rather than with it. By bringing in kids and community members [these paintings] became something created by everyone for everyone.”

The paintings were created as part of a partnership among Groundwork Milwaukee, Community Hands Block Watch, and ArtWorks for Milwaukee. After applying and being accepted to work on the project, the four interns, Keano Avery, Bivianno Bradley, Onyx Potts and Nivia Gonzalez, began brainstorming ideas for the artwork. They decided to turn to the community for inspiration.

In the meetings that followed, the young artists spoke with residents from across the neighborhood to get an idea of what they wanted to see in the new paintings. While some portray instances of inequality and prejudice, others communicate the importance of peace and justice in the neighborhood.

“I think it’s beautiful,” said Cynthia Adams-Burrell, manager of the Rays of Sunshine garden. “People around here need to put more value in what’s in these kids’ brains. They’re more than just a baggy pair of pants. They have a lot of talent to give.”

The paintings were created over two Saturday afternoons. On one of those days, children from the neighborhood were invited to assist the interns with their work. These moments of community engagement were a highlight for many of the interns involved.

“I really enjoyed the community painting day when all the kids came to help us out,” Gonzalez said. “It was nice to see people wanting to get involved.”

Despite heavy rain on the day of the installment ceremony, more than a dozen community members came to the event to show their support for the young artists.

“A lot of people nearby had their fingerprints all over this,” Carter said. “That’s what I love about it. Nowadays you don’t see neighborhoods like this getting a lot of love or good attention, so I guess it’s good to see that this space is already being appreciated.”

Editor’s note: This story was updated to correct the spelling of Bivianno Bradley’s name.