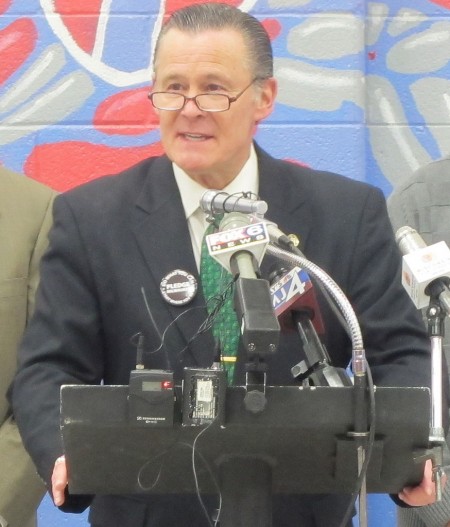 Ald. Bob Donovan (center), pictured at an unrelated event, voted against the new marijuana ordinance, saying it would have a negative impact on employment. (Photo by Edgar Mendez)

The Milwaukee Common Council’s decision to lower the maximum fine for marijuana possession of less than 25 grams to $50 has drawn praise as a first step to reducing racial disparities in enforcement of marijuana laws, and criticism for its potential to increase marijuana use.

The change came on the heels of a Public Policy Forum report that found that 86 percent of those arrested for possession of marijuana in Milwaukee County were African American. A 2014 NNS report found that marijuana possession charges originating from Milwaukee were a strong contributor to the racial disparity in Wisconsin’s prison system.

The ordinance reduces the maximum fine from $500, though it doesn’t necessarily affect the district attorney’s ability to prosecute a second or subsequent offenses through state court. A second state conviction results in a felony. Nevertheless, Ald. Nik Kovac, who authored the new ordinance, said changing the local law is the first step toward changing the prosecution process that has disproportionately impacted African Americans in Milwaukee. During the Common Council meeting Kovac said the racial disparity in enforcement of marijuana laws, “intentional or not, is not acceptable.”

According to Kovac, lowering the punishment will deprioritize marijuana offenses, allowing police officers and district attorneys to focus more resources on violent criminals.

Molly Collins, associate director of the ACLU of Wisconsin, described the new ordinance as a small move towards racial justice in the state’s criminal justice system. She said the existing disparities are “embarrassing and morally wrong,” adding that the old policy has been ineffective. “Decades of harsh punishments through the criminal justice system have had no impact on use and create a lifetime of collateral damage.” 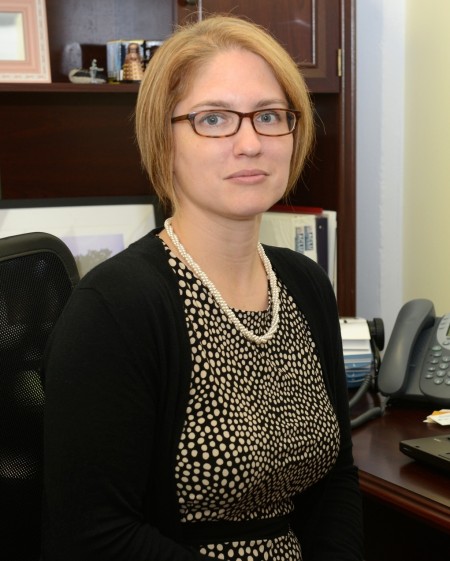 Molly Collins, associate director of the ACLU of Wisconsin, describes the new ordinance as the first step in addressing the racial disparity in marijuana law enforcement. (Photo by Sue Vliet)

Collins said changes need to be made in policing, charging and incarceration to end the racial disparity related to marijuana possession.

While several steps remain before marijuana possession would no longer result in state charges, according to Collins the ordinance change will still result in fewer people being arrested. “There is no simple answer, no silver bullet, but it is critical we take a lot of steps in the right direction.”

Ald. Bob Donovan was one of three council members to vote against the measure. In a statement emailed to NNS, he said the change in the local law would result in more people using marijuana, which will hurt their employment opportunities.

“We already have a serious joblessness rate in Milwaukee and I believe now we will have many more people closing a door to employment opportunities because [applicants] can’t pass a drug test,” wrote Donovan. The most recent data available from the American Management Association found that 62 percent of employers require a drug test.

Donovan stated that the drug problem in the community is growing, and that the new ordinance is sending the wrong message. “I cannot, in good conscience, support something I feel will hurt society’s efforts to combat drug use,” he said. Torre Johnson, site manager for Wisconsin Community Services, also expressed concern about the ordinance’s impact on individuals who are looking for jobs.

“A lot of our young people already want to just get high and not get a job,” Johnson said. Still, he said slowing down the process of locking people up for minor drug offenses overshadows that concern.

“If you give people criminal charges, they have a record and can’t find a job anyway,” he said.

Johnson described marijuana as a “gateway” drug and said he does worry that the change in the ordinance could lead to an epidemic in marijuana use among youth in Milwaukee. “I don’t want to see young people thinking it’s okay to get high all the time but I’m also tired of seeing our courts flooded with people of color.”

Justin Bielinski, who earlier this year announced his candidacy for 8th District alderman, the seat Donovan currently occupies, spent five years as a group therapy facilitator on the adolescent day treatment unit at Rogers Memorial Hospital in West Allis. He said that while many of the patients he dealt with used marijuana on a regular basis, they rarely, if ever, said that receiving a ticket or fine deterred them.

“In my opinion, a change in fine levels will have little to no impact on the (marijuana) usage levels of teenagers in Milwaukee.”

He said that moderate marijuana usage among youth is often less harmful than effects of binge drinking or other drugs.