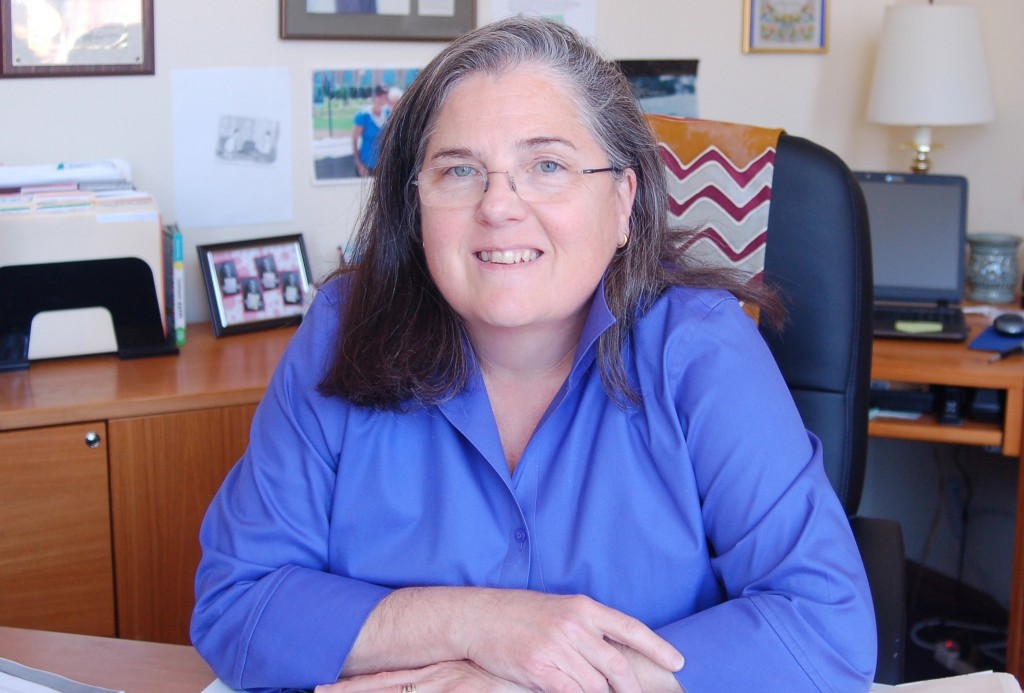 Executive Director Carmen Pitre will continue working in her office at the Germania Building until the new Sojourner Family Peace Center opens in late 2015. (Photo by Andrea Waxman)

When Carmen Pitre worked for the AIDS Project in the late 1980s, she saw terminally ill young people abandoned by everyone, even their families.

“To see 19-year-olds dying of AIDS-related illnesses and nobody wanting to touch them or feed them or help them was really what set my heart on fire to work against the injustice of what happens to people who are hurt in our society,” Pitre said.

Now executive director of Milwaukee’s Sojourner Family Peace Center, Pitre has been working to alleviate the pain of society’s most vulnerable people for more than 30 years. In the fall, the center will open a new state-of-the-art building covering a city block at 619 W. Walnut St. to shelter and treat victims of domestic violence.

Sojourner’s new facility will contain a secure shelter that will replace a small shelter currently in a confidential location. It will also include an education center with space for community groups to meet and a separate office area for partner agencies. The shelter will increase the number of women and children it can house from 46 to 56, in better accommodations. 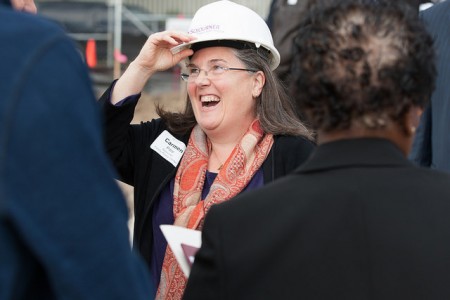 A main advantage of the new center is that most of the services battered and abused clients need will be located in one building. “At the worst time in your life, if you have to go to eight or nine locations, that adds to your trauma,” Pitre explained.

“For traumatized people, the easier we can make it the better. The more we can wrap our arms around them the better,” she said.

The Children’s Hospital of Wisconsin Child Protection Center and Milwaukee Police Department Sensitive Crimes Unit will move into the new center and seven other organizations will have a presence there.

Pitre is looking forward to engaging community residents and adding education programs, especially for high school students. “We have to engage with our young people differently so they can be better prepared for (healthy) relationships,” she said.

The new center has been a long time coming and has taken “a lot of vision, strategy and rolling up of sleeves,” said Becky House, president of Sojourner’s board of directors. Acknowledging it’s been a team effort, House credits Pitre’s professional relationships and her ability to “shoot for the moon” as important in realizing the new center.

“Carmen is a very serious person,” agreed Cecelia Gore, executive director of the Brewers Community Foundation. Gore, who has worked with Pitre for more than 15 years, said raising funds for the project was a tremendous undertaking. “She is one of those unique individuals who puts in the time to achieve her goals in a way that’s extraordinary.” Gore added.

When Pitre left the AIDS Project, she went to work for Milwaukee County’s Fighting Back Project, an initiative of the Robert Wood Johnson Foundation that used neighborhood partners and culturally authentic approaches to reduce alcohol, tobacco and drug abuse in four minority communities. There she met community leader and educator Alice Meade and a number of other strong African-American women whom she credits with making her who she is today. Alice’s Garden is named in honor of Meade.

“They took the time to mentor me and taught me about the city and the richness here. It was all about culture and cultural competency and using neighborhood resources to deal with problems,” Pitre said.

Meade is an example of an individual who understood her community and how to help it, she said. Pitre remembers Victor Barnett as another such resource. Before founding Running Rebels, Barnett said to Pitre, “Give me a basketball and a kid who is struggling and I can save any kid’s life, Carmen.”

“Victor is an amazing leader today and he’s created this wonderful organization. There are lots of Victors in our community,” Pitre added.

Pitre and Mancuso became co-directors of Sojourner Family Peace Center when the Task Force on Family Violence headed by Pitre and Sojourner Truth House under Mancuso merged in 2009. They worked closely together, like “synchronized swimmers,” in the words of one board member, for five years. Mancuso is now the executive director of The Women’s Center in Waukesha.

Pitre continues to be her mentor, Mancuso said. “She doesn’t view anyone as competition. She wants to help everybody and that’s a powerful trait in a leader,” Mancuso added.

Mancuso credited Pitre with spearheading the Milwaukee Judicial Oversight Initiative (JOI), in the late 1990s. According to Pitre, the goal of JOI was to increase victim participation and offender accountability in the court process to make victims safer.

Pitre says she now speaks openly about her own experience with family violence and substance abuse because she has come to understand its value to her clients.

“When you’re hurt, you have all kinds of complications in your life and one of your survival strategies, as it was for my family, is to drink away that pain as a way to survive,” said Pitre, a Louisiana native. “I started drinking at a very early age because my home environment was painful.”

She counts herself lucky to have been given an opportunity to turn her life around at an early age. After the death of a beloved cousin who was driving drunk, Pitre said she realized instantly that she had to change the course of her life. A counselor referred her to DePaul Rehabilitation Hospital in Milwaukee, the best treatment program in the country at the time, when she was 22, she said. She has lived and worked in Milwaukee since then. DePaul closed in 1997.

“I’ve had a unique path and I talk about it as much as I can with our clients because I think there are so many hopeless people. Hope was an important thing to me. To have somebody say, ‘I see something in you that’s worthy and valuable, when I felt like I couldn’t find that place in myself, really sustained me.

“Violence is a generational gift that passes down from one generation to the next,” Pitre said. Having walked that road, she says she knows how important it is for those struggling with violence to have a place at the table.