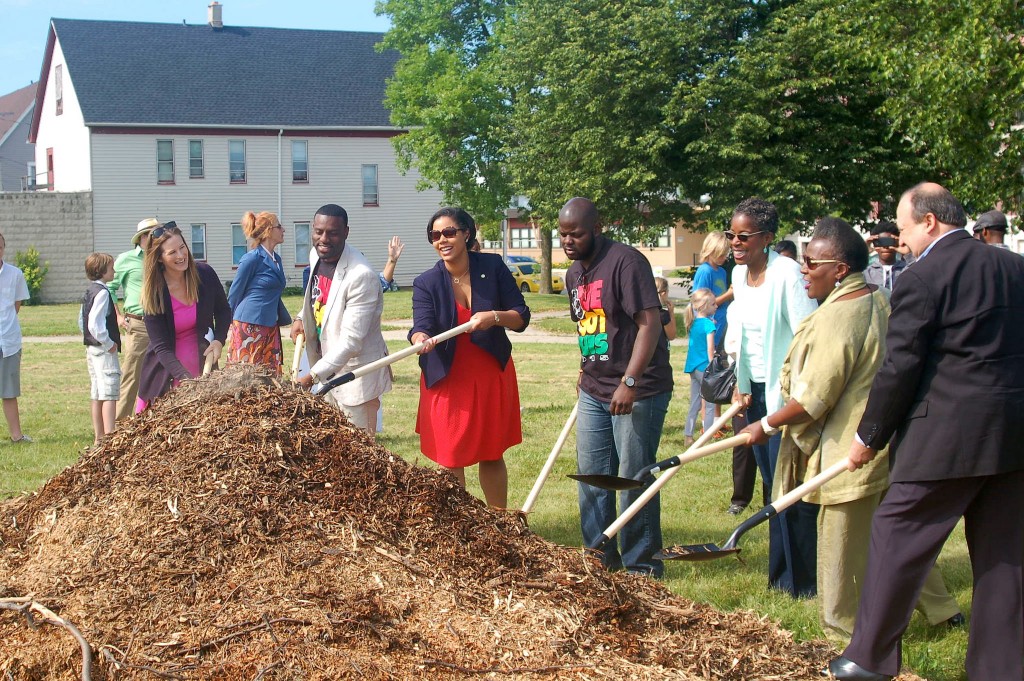 Dancing to the beat of the Neu-Life Community Development Drumming Corps, a group of roughly 70 people including civic leaders, donors and residents gathered at Johnsons Park to celebrate a historic day in a historic place. The groundbreaking ceremony symbolized the start of $1.2 million in improvements to the only public park space in the Lindsay Heights neighborhood. The project is expected to be completed by the fall.

“So much good change, so well deserved, such a long journey to get to this beautiful day, so long overdue, but we’re here at last,” said Marcia Caton Campbell, executive director of the Center for Resilient Cities.

According to Caton Campbell, renovations include new energy-efficient LED lighting, a sports practice field, a stage built for music concerts and spoken word performances, a backstop and t-ball field, 12 park benches, bicycle racks, eight new trees, a green infrastructure basin to absorb storm water runoff, restrooms and an open air picnic shelter. The picnic shelter will replace the old pavilion that was taken down this past December. 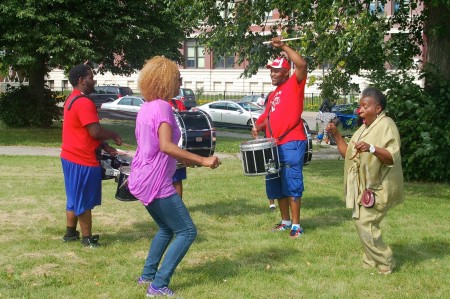 The project to improve the immediate area around Johnsons Park, called the Johnsons Park Initiative, followed the 2010 redesign of Alice’s Garden and 2012 reconstruction of the Brown Street Academy schoolyard and outdoor classroom. The Center for Resilient Cities coordinated the initiative, which combined public and private funding from a collaboration of stakeholders including Milwaukee County, the Rotary Club of Milwaukee, LISC Milwaukee, Johnsons Park Neighborhood Association, Walnut Way Conservation Corp., Alice’s Garden, the Zilber Family Foundation and more than a dozen other funders.

The groundbreaking ceremony celebrated the donors that made the park renovations possible and the dedication of residents, organizations and community leaders that saw the project through. Several local politicians showed up to express their gratitude for all who have worked on the project and are supporting its completion.

“This new enhancement is just going to enhance our district even more,” said Alderman Russell Stamper. He discussed the potential for more activities for all ages at Johnsons Park but emphasized, “I want the youth to have a place to be proud of.”

County Supervisor Supreme Moore Omokunde called the park a crown jewel of his district and celebrated the day as a fulfillment of one of his campaign promises. “One of the things I ran on when I ran for county board was using parks as community-building spaces, because once you have your parks in certain areas and things are happening in the parks, that spills out into the greater community,” he said.

State Rep. David Bowen, who has been involved in improving the area around Johnsons Park since his days as a Public Ally, said the renovation demonstrates “the power of collaboration and investment.”

Groups of attendees symbolically shoveled dirt to signify kicking off a summer of change in Johnsons Park. The family of John C. Walker, a primary funder, scooped the first shovelful of mulch, followed by speakers, other community leaders, youth members of Neu-Life and local residents.

Johnsons Park’s long history includes its role as a stop on the Underground Railroad, a network of secret routes and safe houses to help slaves escape to free states. In 1955, the area where the park now is located was demolished to enable the building of a new highway that never came to fruition, leading to economic devastation in the neighborhood.

The tone of the groundbreaking ceremony was triumphant. Longtime residents, including Thelma Sias who has lived down the street from the park for 10 years and donated to the Johnson Park Initiative, joyfully embraced friends, neighbors and politicians.

Sias says the significance of the improvements is that they increase access to quality parks and attractive public spaces for the children of Lindsay Heights. “I go to Shorewood, and I see the beauty of their parks. Now I’m gonna have a Shorewood right here in my ’hood,” Sias said.

Added John Bernaden, immediate past president of the Rotary Club of Milwaukee board of directors, “If Milwaukee is going to grow and be the best place it can be, all of our communities must thrive, and Johnsons Park is one way we can make that happen.”