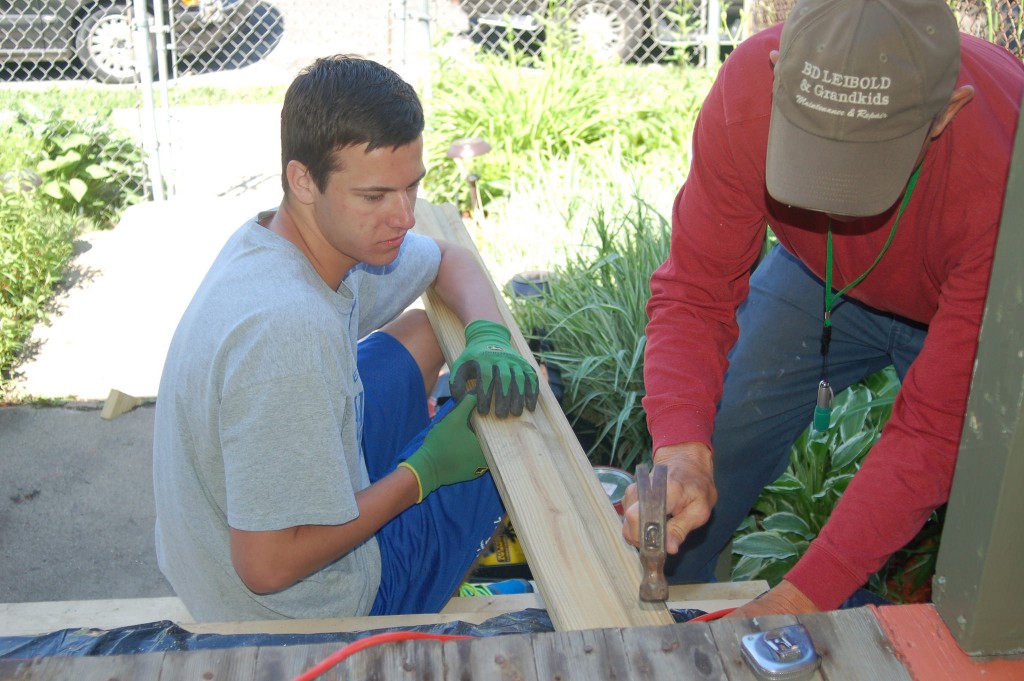 Two-and-a-half years after the 14th Street C.A.R.E.S. block club and blocks throughout the Borchert Field neighborhood came together as Borchert Field C.A.R.E.S., the alliance has a master plan.

Inspired by a similar project in the nearby Amani neighborhood, the Borchert Field group collaborated with graduate students from the UWM School of Architecture and Urban Planning to prioritize its goals and figure out how to start working toward them.

“We thought about how the organization can grow into something successful and created a map for (it) to get there,” said graduate student Alex Morganroth, one of five team members working on the master plan.

In its continuing fight for positive change in the North Side neighborhood named for the city’s first professional baseball field, Borchert Field C.A.R.E.S. (Community Advocating for Residential Empowerment & Stability) has also established the Story and Art Garden and started planning youth programs there. In addition, it expanded the reach of a volunteer housing repair project started last summer. 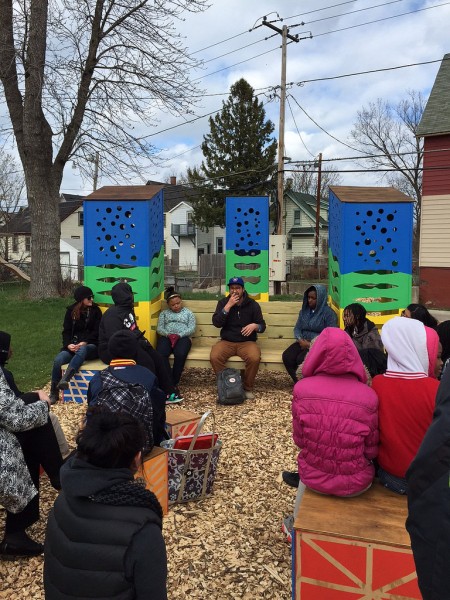 A.W.E. board member Adam Carr (center) is the first to tell a story in the Story and Art Garden at 9th and Burleigh streets, with LaFollette Boys & Girls Club members in the audience. (Photo by Andrea Waxman)

Some of the organization’s goals are to create educational programming — especially for the neighborhood’s girls and young women, a vision for dealing with vacant spaces and a revitalized Burleigh Street, according to Morganroth.

Boosting resident involvement and increasing the visibility of Borchert Field C.A.R.E.S. emerged as important goals, said Denise Wooten, a co-chair of the group. Doing so will require, among other things, a Website, an active social media presence, and a permanent work and meeting space, all of which necessitate developing funding sources. Establishing itself as a nonprofit organization will also benefit the association, Morganroth said.

The plan includes approaching a menu of grant funders. “We looked at 10 organizations that are successful and figured out what were some good smaller grants (Borchert Field C.A.R.E.S.) could pursue,” Morganroth said. Going after more complicated federal grants will come later, he added.

For youth programming, Borchert Field C.A.R.E.S. is looking to its neighborhood gardens, established in empty lots with the help of resident gardeners and city agencies. The newest of these is the Story and Art Garden on the corner of 9th and Burleigh streets. Organizers envision the garden as a safe space where residents, especially children and teens, can share stories and express themselves through art, and where youth development leaders can offer programs.

Storyteller Adam Carr, a board member of Artists Working in Education (A.W.E.), launched stories in the garden on April 22, Earth Day, with an audience from LaFollette Boys & Girls Club. In addition, A.W.E. worked with area youth to create and install artwork in the garden.

Morton, a psychotherapist, is particularly concerned because Milwaukee is a center for sex trafficking. She aims to protect neighborhood girls with activities that build self-esteem, strengthen community bonds and healthy choices, and create awareness of the threat of sex traffickers. She has obtained permission from the city to use the Story and Art Garden for the program, she said.

Another issue Borchert Field residents and Borchert Field C.A.R.E.S. have struggled with is maintaining and preserving housing stock. After the failure of the Targeted Investment Neighborhood Program in Borchert Field, begun in 2012, and similar problems with neighborhood homeowners failing to qualify for the newer Strong Homes Loan Program, the group looked to volunteer organizations for help, according to Wooten. The Strong Homes Loan Program stopped accepting applications for 2015 in May.

Residents must provide materials but the volunteers do the work, which included repairing porch steps, painting inside and outside, clearing out basements and attics, and gardening, Wooten said. If residents are able to help, CHWC likes them to do so. “I’m finding out that (the teens doing the work) really like talking with the residents about the history of being in their homes, showing them a home atmosphere,” Wooten said.

Borchert Field C.A.R.E.S. meets at 6 p.m. on the second Tuesday of every month at Metropolitan Missionary Baptist Church, 1345 W. Burleigh St. The July 14 meeting will be held in the community garden at 10th and Burleigh streets, weather permitting. All community members are welcome and encouraged to attend.