You are here: Home / "How To" articles / How to see Discovery World in two hours
Share this... 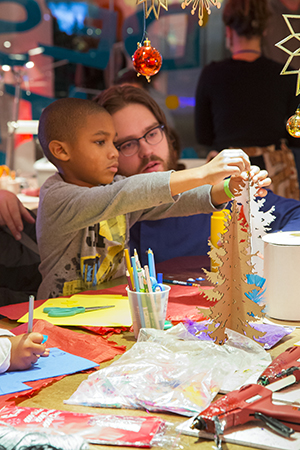 While you could spend an entire day at Discovery World, the museum is a perfect place to visit if you wish to spend just a few hours downtown. The only problem you’ll have is deciding which experience to choose.

The first exhibit to explore is the Reiman Aquarium. Literally built on top of Lake Michigan, the aquarium features 10 different tanks that house everything from porcupine puffer fish and moon jellies to native paddlefish and shovelnose sturgeon. The Reiman Aquarium is designed to replicate the nautical trek from the Great Lakes to the Caribbean — the same journey Discovery World’s tall ship, the S/V Denis Sullivan, used to make every year. The aquarium’s Touch Tanks also allow visitors to pet stingrays and bamboo sharks.

Music lovers can immerse themselves in Les Paul’s House of Sound — the world’s largest collection of Les Paul’s artifacts and the innovations that he inspired.

Aspiring pilots can fly a plane in our Flight Simulator.

Finally, it’s nearly impossible to find a cooler way to spend two hours than aboard Discovery World’s tall ship. Commonly described by the public as a “pirate ship,”,the Sullivan is the world’s only re-creation of a 19th century three-masted Great Lakes schooner. Two-hour day sails are offered from May through October allowing passengers to help set the sails, take a turn at the helm, or simply enjoy a breathtaking view of Milwaukee.