You are here: Home / Home / Carousel / Couple leads effort to serve home-cooked meals to neighbors in need
Share this... 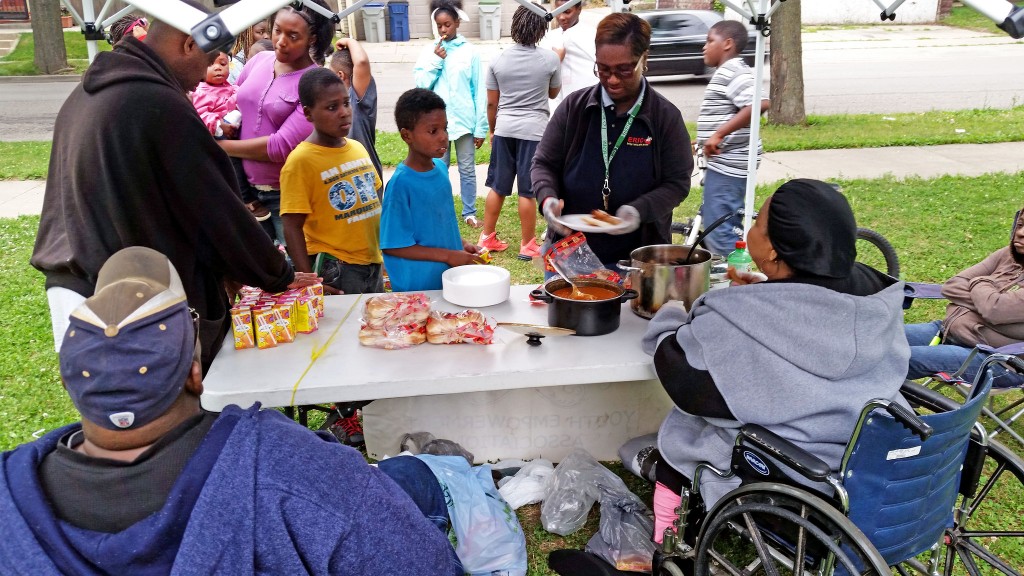 Three days a week — Mondays, Wednesdays and Fridays — Arthur Ward, his wife Brenda and a handful of dedicated volunteers set up a small white canopy near the north end of Butterfly Park, 3717 W. Meinecke Ave., in the Metcalfe Park neighborhood.

The canopy is a signal to park visitors, mostly children, that dinner will soon be served. This particular day it’s chili dogs, a juice box and a small bag of candy. In the past the menu has been smothered chicken with greens or ribs served with rice and gravy — all homemade.

“We’re trying to bring the community together in peace and let them eat together,” Ward said.

Though many children smile as they walk away with their meals, Ward doesn’t see them. A beating more than 25 years ago left him without one eye and blind in the other. 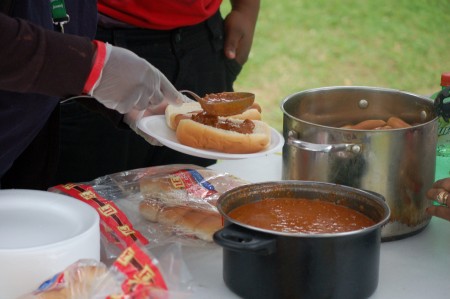 A typical meal, this one featuring a main course of chili dogs, costs the group about $200. (Photo by Edgar Mendez)

“Helping the community helps me get over what I lost and the anger I once felt over it,” Ward said. Sharing a meal is a show of unity, he added. “It’s something we really need in this community.”

Ward’s group, the Matilda Ward Youth Empowerment Association, named after his late mother, has been providing free meals at the park for more than 10 years. On a typical day the group feeds more than 100 people.

Brenda Ward is also disabled, having lost the bottom portion of her left leg and foot to diabetes a few years ago. Her disability hasn’t slowed her spirit either.

“If they keep eating, we’ll keep coming,” she said, while serving chili seated in her wheelchair.

At one point, during the height of the Wards’ summer meal program, they served 400 meals a day. In prior years, many meals the group provided were paid for by funding from organizations including the Hunger Task Force and Social Development Commission, but in the past two years the organization has been going it alone.

Funds for the meals come from the couple’s disability checks and money Ward earns, as well as small donations, but it’s been an increasing challenge to pay for meals that on average cost $200.

Keyainna Burchette has been coming three times a week for dinner, usually with her four children in tow.

“They love coming here,” Burchette said. The meals served at the park provide an opportunity to come out and meet other kids and parents. Without them, “we’d be sitting in the house watching TV.”

Greg Hill, Ward’s brother in-law, has been volunteering to help with the meals for the past 10 years. “We’re out here showing that there is unity amongst us,” Hill said, as he opens a bag of hot dog buns.

Melissa Thompson, who lives near the park and said she often comes to enjoy the meals, brought along her younger brother, Jeremiah, cousin Andre and goddaughter Armani. “She really likes it,” Thompson said, pointing to Armani as she sat on a swing chewing on the bun of her chili dog.

The group plans to serve meals through most of August, according to Ward.

And they’ll find ways to keep paying for them, he said. “It’s worth it to know that people enjoy what we do.”