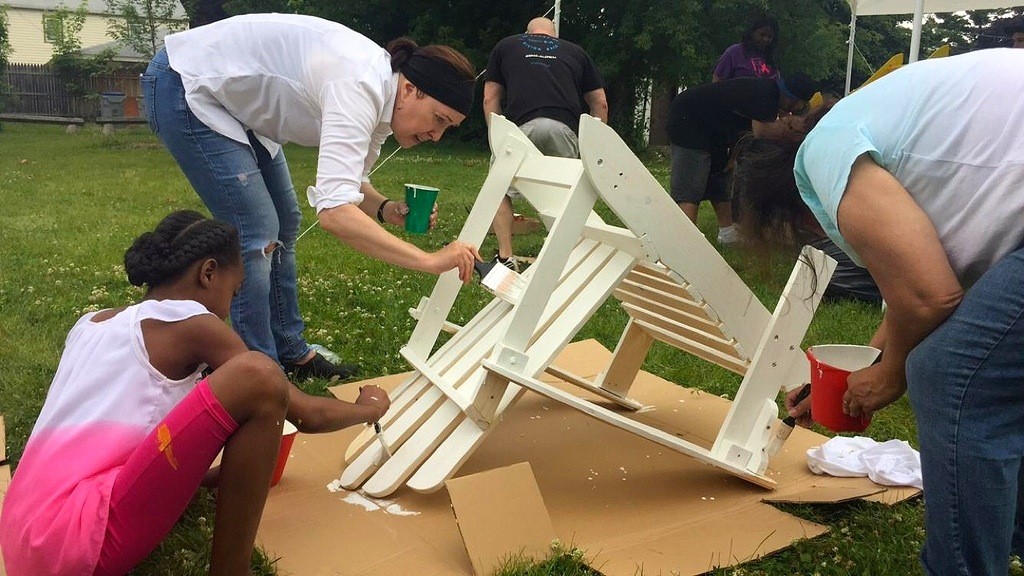 Residents of the Thurston Woods neighborhood recently gathered in a vacant lot with a unique mission: to paint their town yellow.

Organized by the Agape Community Center’s neighborhood development staff, the Yellow Chair Project provides free Adirondack chairs to Thurston Woods residents. Supplies for the project are funded by the city and Agape, so all that’s required of the community members is to arrive, assemble and paint the chairs yellow. This is the project’s first year. Several additional dates have been scheduled in July.

Karen Mierow, Agape’s neighborhood planning coordinator, said the project’s main purpose is to help residents get to know each other.

“Here’s the thing about chairs,” she said. “People like sitting in them. Why not all sit in chairs together and have happy friendship fun time?” 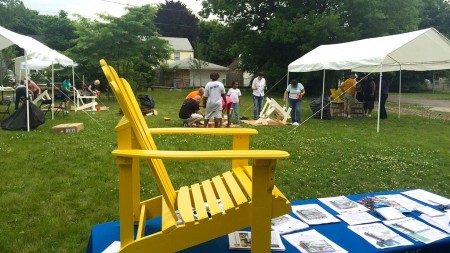 Stephanie Stilwell added that she and the other members of the community center’s staff chose yellow chairs for the neighborhood project because of their “cheerfulness and curb appeal.

“In Wisconsin people hibernate for six months out of the year, so the minute it gets over 55 degrees everyone is on their porch,” Stilwell said. “So we thought, ‘What’s better than having a nice relaxing chair, painted bright yellow so everyone can see it?’ ”

The project also caught the attention of a few non-Thurston Woods residents, including Bill Seitz, who lives in Muskego and works for Sigma-Aldrich. According to Seitz, the chemical company has many employees who live in Thurston Woods.

“There’s a lot of pride in this neighborhood and it’s been nice meeting the folks that live here,” said Seitz, who attended the kick-off event. “You’re only as good as your neighborhood so we try to help out as much as we can.”

Seitz added that he thought the experience was beneficial for all those involved, including his young son who he brought to help. Together the two spent hours assembling and painting chairs with Thurston Woods residents.

“It’s great for kids to get out of the suburbs and into the city,” Seitz said.

The popularity of the first Yellow Chair event on July 11 prompted Agape to add another date. According to Mierow, 17 chairs were completed at the first event and 30 people are already signed up for the one on July 18. Agape’s goal is to complete 75 chairs.

“It’s about more than just curb appeal,” Mierow said. “Residents get to form social connections. Once these are in their yards it’ll improve the neighborhood’s physical landscape and hopefully when people drive through the neighborhood they’ll see them and say ‘Oh yeah, I’m in Thurston Woods.’”