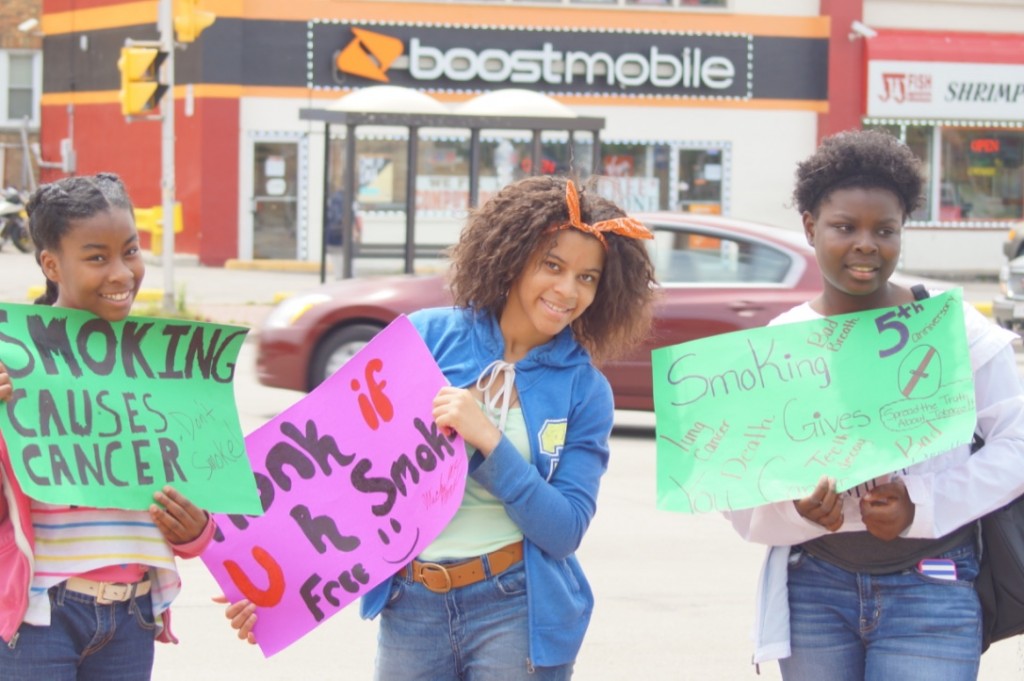 With the sun shining down on their smiling faces and a gentle breeze keeping them cool, members of FACT, Wisconsin’s youth-led tobacco prevention movement, gathered recently in front of Atkinson Library, 1960 W. Atkinson Ave., to celebrate the fifth anniversary of the enactment of Wisconsin’s indoor smoking law.

Stream after stream of vehicles traveling along the intersections of Atkinson Ave and Capitol Dr. blared horns in support while some on foot asked,”what are you all celebrating?”

And while Richardson and the other FACT teens were there to celebrate and acknowledge that anniversary, the group also had other goals in mind, according to Tristan Gross, program coordinator for the WAATPN.

“We wanted people in the community to learn more about a law that has such a huge impact on their health,” Gross said. 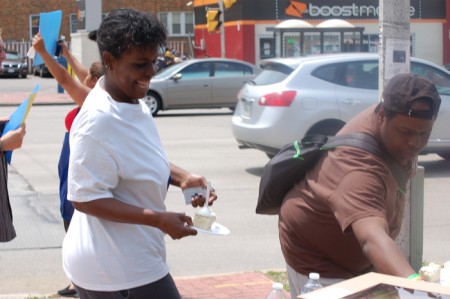 The Wisconsin law, statute 111.123, outlawed smoking in public places, places of employment and other enclosed locations. Wisconsin is one of 36 states that currently have similar types of smoke-free laws in effect.

The FACT teens, whose ages range from 12-17, were still in elementary school when the law eliminated smoky bars and smoker’s sections at restaurants from the Wisconsin experience. Still, they do have faint memories of the days before the smoke-free law was passed

“I remember how bad it use to smell at a restaurant and how the smoke use to carry over to where we were sitting,” said Sherrie Foster, a member of WTPPN FACT.

One of the key lessons they’ve learned as members of FACT, she said, is how dangerous second-hand smoke can be.

“Exposure to second-hand smoke is harmful,” Foster said. Foster and her two sisters joined FACT in 2013, and are three of more than 3,000 current members, statewide.

While she said that the Wisconsin indoor smoking law is something that should be celebrated, she is concerned about the rising popularity of e-cigarettes, which are not included in the ban. The products, most commonly referred to as “e-cigs,” come in a variety of forms including vapes and hookahs.

Foster said that in recent years, she’s seen more and more teens at her Milwaukee school and in her community using and carrying e-cigs.

“I even know one boy that matches his e-cigs with his outfits each day,” Foster said.

Some of the growth in popularity of e-cigs, according to Gross, has occurred because companies have sought ways to circumvent laws banning indoor smoking by offering tobacco users a product they advertise as not just a safer alternative to smoking but also one which can be used anywhere.

Gross said it’s been a historical practice for tobacco companies to target minors with their products.

“Back in the day they used cartoon characters to entice teens and now they sell fruit and candy-flavored products in colorful packaging to entice them, which extends to their marketing of e-cigarettes,” Gross said, mentioning flavors such as grape, bubble gum and sour apple.

Those marketing practices appear to be working.

In fact, the 2014 Wisconsin Youth Tobacco Survey found that 8 percent of high school youth reported using e-cigarettes regularly, an increase from prior years. Nationally, e-cigarette usage rates among youth have, for the first time, outpaced that of traditional cigarettes.

A major concern among health advocates is that conclusive studies on the long-term effects of e-cigarettes are not yet available. Regardless, said Richardson, any type of smoking or tobacco use is bad for you.

“It’s going to make you sick or even worse eventually,” he said, holding a sign reading “Cancer Kills.”