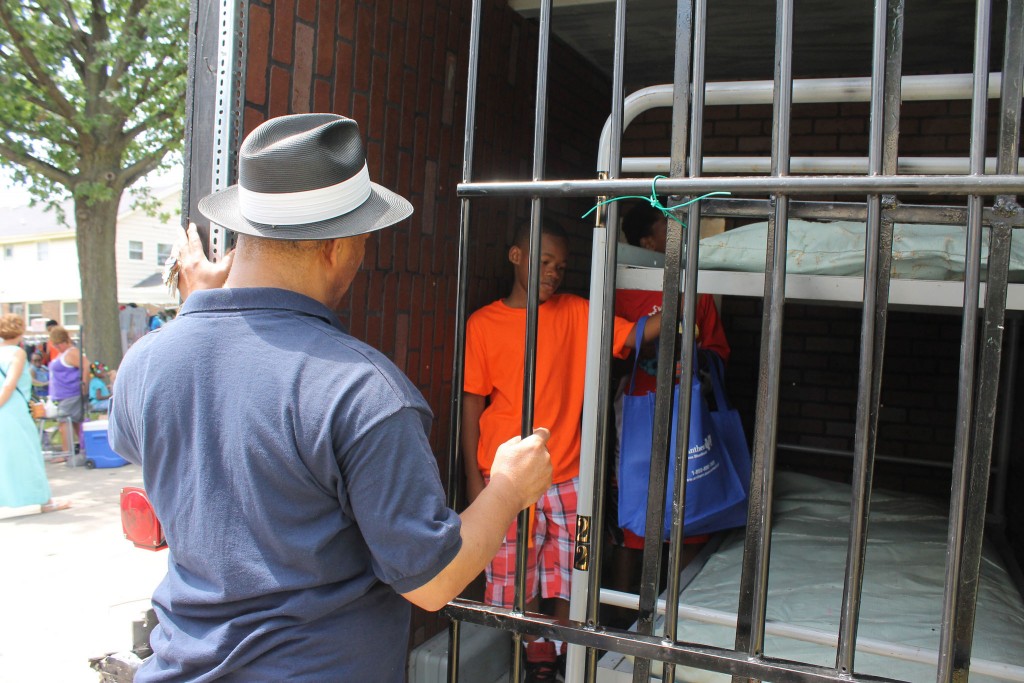 Johnson “Smithy” Chapman of the Phenomenal Men’s Support Group shows a young visitor the Cell on Wheels trailer, consisting of a bunk bed, toilet and an aluminum sheet for a mirror. (Photo by Madeline Kennedy)

The setup and the message are simple: if you do the crime you’re bound to do the time. Through its Cell on Wheels program, the Phenomenal Men’s Support Group (PMSG) aims to paint an accurate picture of what that time in jail is actually like.

“A lot of guys who were in prison come home and act like it’s a badge of honor to be in there,” said Johnson “Smithy” Chapman, president of the group. “That’s the image we’re trying to shake.”

PMSG was founded 15 years ago as a support group for recovering addicts and alcoholics. Chapman was one of five founding members. Today the organization has grown to include 75 members.

Rick Neighborhood has been with the group for eight years and has been off alcohol for almost a decade with the support of PMSG. 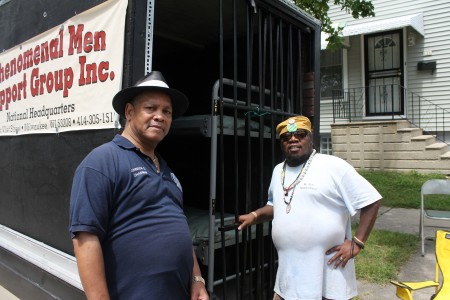 Johnson Chapman and member Rick Neighborhood have brought the Cell on Wheels trailer to nearly a dozen events this summer. (Photo by Madeline Kennedy)

“It’s great what these guys do,” Neighborhood said. “It’s something I love being a part of because they gave me an opportunity to reach out and give back to the community.”

Cell on Wheels is PMSG’s most eye-catching community outreach initiative. The group has been bringing its makeshift jail cell to community events including church gatherings, school events and block parties for six years.

At a recent block party on Garfield Avenue, the cell quickly became one of the most eye-catching attractions. The dimly lit cell holds a bunk bed, toilet and a dull piece of reflective aluminum for a mirror.

Chapman explained that everything inside the makeshift jail cell was assembled by PMSG members and donated by the Milwaukee County Sheriff’s Department. He added that the trailer is rarely cleaned and its overall dingy state is intentional.

“We didn’t want to make this a fun experience for them. A single bad decision could end you up in here and not enough kids realize that,” Chapman said. “Once you step in [the cell] you lose your name and become a number.”

Chapman added that before he was president of the organization and mentor to more than 50 youths in the community, he spent three years behind bars. After going to college on a track scholarship and starting a career in the Army, Chapman said he gave it up and “chose the streets.”

“I’m not proud of what I did and I don’t like to think of the lives I messed up,” he said. “But it occurred to me that there might be some kid out there who saw me flashing my money, cars and women and he was impressed by that. So I decided I wanted to tell the whole story.

By creating Cell on Wheels, Chapman said he hopes to shatter misconceptions and provide a clear picture of life in prison. He added that few people realize how much they depend on cell phones, computers and even refrigeration. He said that in jail, if you get something from the cafeteria and want to keep it cold, you have to put it in the toilet.

Chapman and the other PMSG members relayed these facts to any child or adult who stopped by the trailer at the block party. All of the cell’s temporary tenants were asked the same set of questions: How are you doing in school? Do you listen to your parents? Do like it in here? Upon leaving, each had a different reaction.

“It doesn’t look fun. It looks boring. I would never want to spend more time in there than I did just now,” said 12-year-old Martelus of his three-minute stint behind bars.

Others exiting the trailer laughed, walked away shocked or simply remarked, “You guys need an air freshener.”

“I think it’s good for the kids to see something like this,” said Tina Morales, who brought her son and his friends to the block party. “Most people know someone who’s been locked up, but they don’t actually think about what their lives are like while they’re in there. It paints a really interesting picture.”

Chapman said he believes that the Cell on Wheels program has been well received by the community and that it gets more popular each year. The cell is scheduled to stop at as many as three community events each day for the rest of the summer. Chapman, who is now retired, said he doesn’t mind the work or the demanding schedule.

“It’s important that the kids out here see us and see what we’re doing,” he said. “We want to catch them now so the Milwaukee Police don’t have to chase them later.”