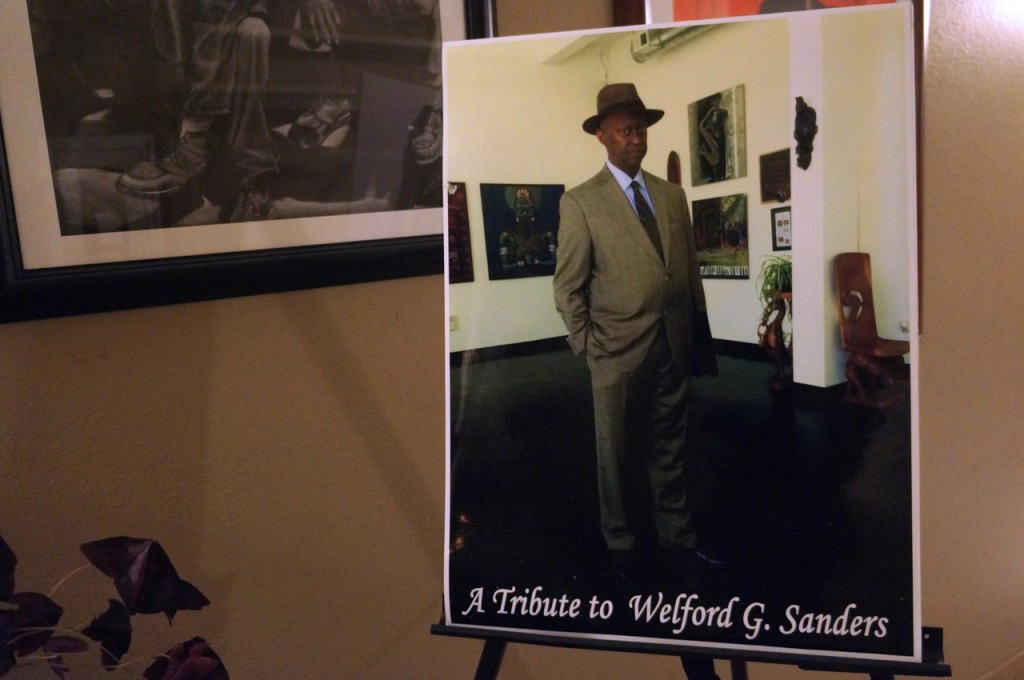 The late Welford Sanders, who was well known for his many successful redevelopment projects in the central city, was honored during the recent Gallery Night on King Drive. (Photo by Adam Carr)

Standing before a packed house on Gallery Night at King Drive Commons Gallery and Studio, Artistic Director Marquita Edwards fought back tears as she spoke of the late Welford Sanders.

“This building we’re sitting in now and the other newer buildings you see on King Drive are all part of his vision,” Edwards said.

The idea behind gallery nights on King Drive, which Edwards and Sanders worked together to create, was to give local artists a chance to showcase their work and residents an opportunity to enjoy art, music, food and fellowship.

“We both saw it as another way to empower the community,” Edwards said. 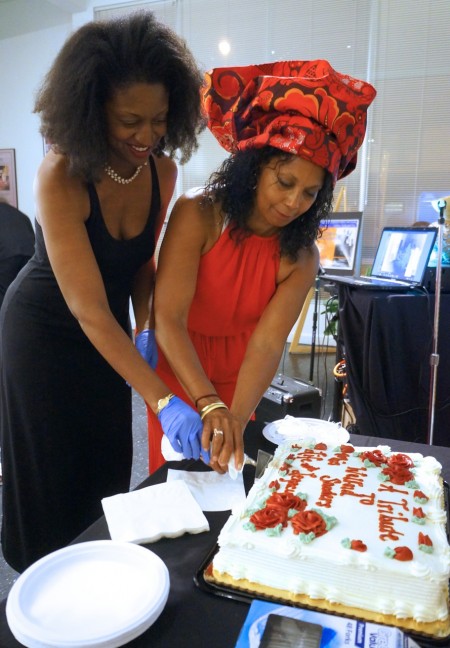 Dawn Sanders (left), daughter of the late Welford Sanders, and Marquita Edwards, artistic director of the King Drive Commons Gallery and Studio, cut a piece of cake during a celebration of the late developer’s contributions to the community. (Photo by Adam Carr)

This Gallery Night, at 2775 N. Dr. Martin Luther King Drive, was dedicated to Sanders, as family, friends, colleagues and others gathered to honor the memory of a man they described as a visionary and silent warrior, as well as the consummate professional. Sanders passed away in May after a long illness.

Marcellius A. Brown, a board member of the Martin Luther King Economic Development Corp. (MLKEDC), the organization Sanders ran as executive director beginning in 2001, recalled being immediately impressed by the man who wore a fedora and a long coat. Brown, who at that time was an organizer in Harambee, first encountered Sanders at a presentation on community development, he said.

A few years after that MLKEDC was in jeopardy and $100,000 in the hole when the group approached Sanders, who’d already been working with the organization, and asked him to take the reins, according to Brown,

During Sanders’ tenure the organization fostered millions in investments, including the King Drive Commons and Growing Power, and remains strong financially, Brown added.

Sanders’ development projects would fit in on Oakland Avenue in Shorewood or on King Drive, said Christopher Boston, director of sustainable communities for LISC Milwaukee.

“That’s because he wouldn’t dumb down the standards of community development because of the status of the neighborhood,” Boston said. He described Sanders as competent in his craft and compassionate about advancing communities.

“He was really a gift that the city had for a long time,” Boston said.

Despite collective grief over the loss of Sanders, his legacy and work will continue through ongoing LISC projects that Sanders worked on in Harambee, Amani, Lindsay Heights and other communities, said Boston.

His zeal for redevelopment also will be carried on by the students of those he guided as a long-time instructor at University of Wisconsin Milwaukee’s School of Architecture and Urban Planning, said Carolyn Esswein, director of urban planning. She first met Sanders while taking a graduate course he taught at the university prior to joining him on the faculty. She said that Sanders, who specialized in urban redevelopment and neighborhood revitalization, often took students to job sites in the city to witness developments in progress.

“He shared his passion for community revitalization first hand with his students,” Esswein said.

She described him as a master at creating a vision for a community and seeing it through by piecing together the resources to make it happen.

Before he began working on Dr. Martin Luther King Drive it was full of empty or underused buildings, recalled Edwards. “He saw it as untapped potential,” she said.

Ultimately, Sanders wanted to help people live a better life, become empowered and have decent housing they could be proud of, she added.

“It was his calling, what God ordained him to do — and he did it.”