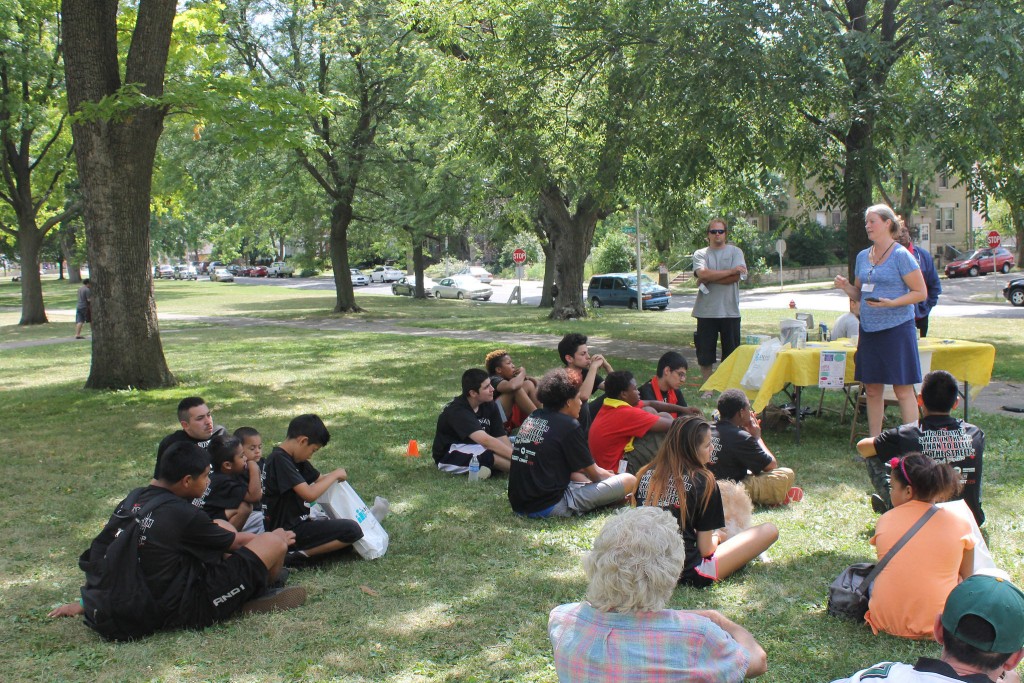 A group of children listen to a presentation about the importance of living an active and healthy lifestyle. (Photo by Madeline Kennedy)

Milwaukee’s Native American community gathered recently at Kosciusko Park on the city’s South Side to raise awareness about childhood obesity, a large issue for the community, according to experts at the Gerald L. Ignace Indian Health Center.

Hosted by the health center, the third annual Fight Childhood Obesity event offered children the opportunity to get active through free workouts such as boxing, yoga and Zumba. Attendees also could receive free physicals, a new feature this year.

Stacey Mattson, a support specialist at the center, noted that while obesity is a problem in many ethnic groups across the country, it remains especially prevalent among the country’s Native Americans. 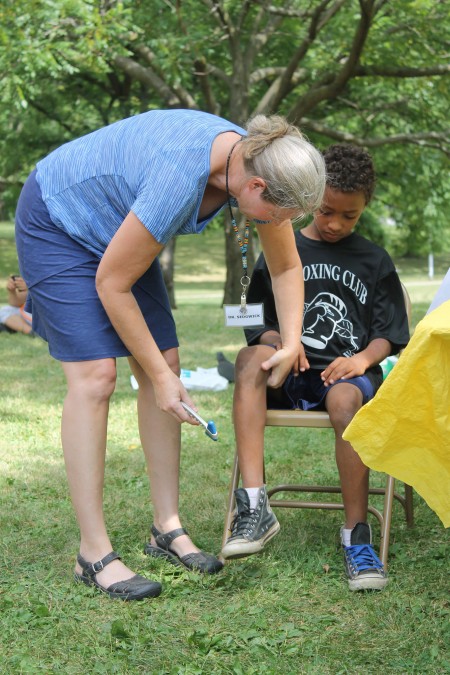 “The rate is specifically so high because of the traditional food they were used to eating before it was Americanized,” Mattson explained. “They didn’t have all these processed foods and were used to eating very natural, so it’s something their bodies have a hard time processing. It’s led to skyrocketing rates of obesity.”

Native Americans have struggled with obesity for generations, but according to the U.S. Department of Health and Human Services, it has increased dramatically during the last 30 years.

While there are many contributing factors, the most dominant are the shifts in diet and lifestyle. Diets historically high in complex carbohydrates and lower in fat have been replaced by foods high in sodium, sugar and saturated fat.

High rates of poverty and unemployment also limit access to healthy foods and promote reliance on federal commodity programs for Indian tribes. Another HHS study found that fat intake was more than 30 percent above the recommended amount in Native American communities across the country.

The Ignace Health Center has hosted the Fight Childhood Obesity event for three summers. This year, Mattson and other event organizers teamed up with Health Center physicians to provide free physicals for kids in the community.

“Not everyone in the community has the opportunity to receive annual or even frequent physicals,” Mattson said. “That’s why we felt it was important to offer physicals.”

Nurse Practitioner Elizabeth Sedgwick was one of several volunteers administering exams. Sedgwick has been with Ignace for less than a year, but has worked with the Native American community throughout her medical career. Prior to beginning at Ignace, Sedgwick spent two years working on a remote reservation in Montana.

“It seems to me, after being on a reservation, that [the Native American community] is a close group,” Sedgwick said. “There’s a lot of cultural pride…. It’s something that should be appreciated and celebrated.”

Sedgwick added that she sees a lot of overweight children in her line of work and believes it’s important to take time to discuss obesity with kids and their parents.

“To me, it’s very important that I teach kids and parents healthy lifestyles,” she said. “If there’s a kid in my office and I don’t have an appointment after them, I’ll keep them there and talk about obesity until the parent says, ‘We really have to go.’ It’s something that needs to be discussed.”

At one point Sedgwick and other community members halted the activities for a discussion about the importance of exercise and health. Children stopped and listened before returning to their workouts.

Mattson was pleased with the event. “Seeing all the kids come together as a community to have fun and be active instead of staying indoors and playing video games is great.”