You are here: Home / News / Arts and Recreation / Ace Boxing Club fights to improve lives in and out of the ring
Share this...

For 55 years, Ace Boxing Club in Kosciuszko Park has provided free boxing lessons to the neighborhood’s at-risk and underprivileged youth.

After more than a half century, not much has changed at the small South Side nonprofit. There’s no phone, fax machine or computer. The club still occupies the same small, sweaty gym, is led by the same family and carries the same motto: “It’s better to sweat in the gym than bleed in the streets.”

Operations Manager Frank Porter hopes to instill confidence and discipline in all boxers who come to Ace. According to Porter, the club teaches children ages 4 and up not just how to box, but also “how to live.”

Boxing runs in the Native-American tradition and his family bloodline, Porter said. His father, amateur and professional boxer Del Porter, founded the club after experiencing a “spiritual awakening” in 1960. He decided to stop training professional boxers and closed up his old gym. Later that year in a small shack in Kosciuszko Park, Ace Boxing Club began. 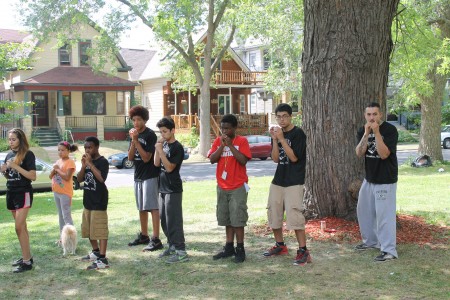 The elder Porter felt called to create a resource center where the neighborhood’s kids could learn to love the sport that had shaped his life, his son said.

“For 48 years, my father ran this place out of his own heart and wallet,” Porter noted. “He wanted kids to get off the street and do something productive with their lives.”

After his father passed away in 2008, Porter decided to step into the ring and continue the program. Ace continues to grow each year. According to Porter, the club trains about 500 young amateur boxers each year.

One of these members is Jaime Nerios, who has participated in Ace for eight years. Nerios said his experiences at the club played a major role in his decision to join the Army after graduating high school.

“The club has taught me a lot,” Nerios said. “It helped me find my love for fighting and the whole experience has made me stronger, I think, both mentally and physically.”

While some kids have been Ace members for years, others such as Ethan Phongsavath picked up their gloves only recently.

“I first heard about Ace through some friends eight months ago,” Phongsavath said. “But I like it a lot. It’s a lot of fun learning new techniques and meeting other boxers. I learn something new each time I walk in the gym.”

Porter credits Ace’s success and legacy to the support it has received from the neighborhood. The clubhouse doesn’t even have a lock on the front door, but Porter insists that there has never been a problem with theft or vandalism.

“I think it’s a testament to the impact we’ve had on the kids around here,” Porter said. “They appreciate what we do and they love to be part of it. It’s what helped us last 55 years and it’ll help us last another 55.”