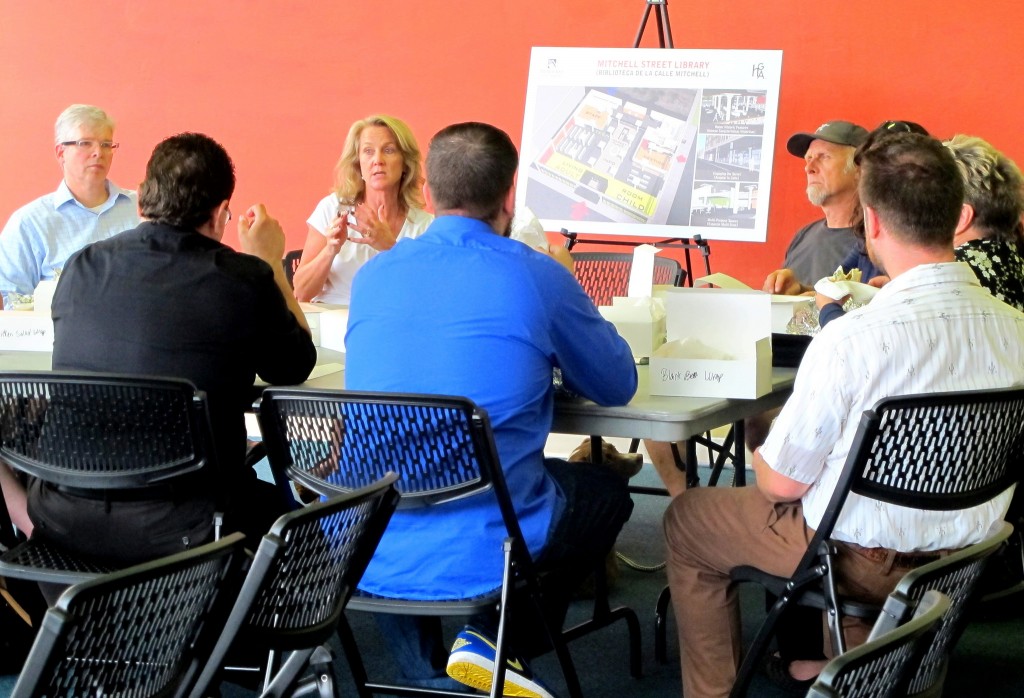 Consultants from HGA Architects and Engineers lead a community workshop to present details about the library design and give participants a chance to ask questions and provide feedback. (Photo by Marlita A. Bevenue)

A display featuring historic photos of the city’s first Hispanic residents; adult learning programs; a dedicated space for teens; and a new name to reflect the Latino community. These are all ideas that came out of a two-day public open house held to get community input on the new Forest Home Library branch in the Historic Mitchell Street neighborhood.

The open house, held at the new site, brought out nearly 60 community members who came to share their ideas on how the facility can best suit their needs.

Just half a mile away from the current branch on 14th Street and Forest Home Avenue, the branch will open its doors at 906-910 W. Historic Mitchell St. beginning in December 2016.

“We need libraries more than ever,” said Paula Kiely, director of the Milwaukee Public Library. “We have traditional library services, like books, but we also have a lot of electronic resources and technology for people who need to use computers and laptops.”

In addition to digital resources, libraries provide instruction to adults and offer programs that encourage children to read, all at no cost to library users. 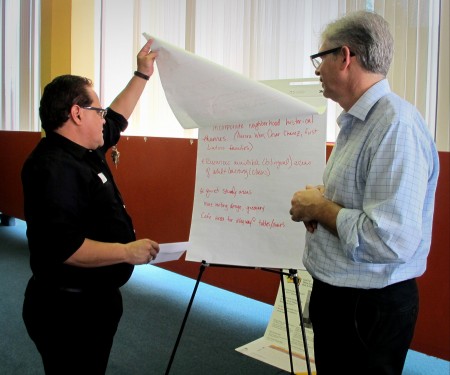 Rudy Gutiérrez, president of the Greater Mitchell Street Business Improvement District, shares his ideas for the new library space with Kevin Allebach, a consultant with HGA Architects and Engineers. (Photo by Marlita A. Bevenue)

Close to schools, grocery and retail stores, coffee shops and restaurants, the new library will be located among several businesses on busy Mitchell Street, occupying the historic Hills Building, which used to house a number of department stores and other businesses including the iconic Goldmann’s Lion Store.

Under the leadership of Sam McGovern-Rowen, MPL’s project manager for the redevelopment project, the city hired architectural firm HGA Architects and Engineers to design the library and Gorman & Company is on board to reconstruct the property.

The redevelopment of the Forest Home Library comes as a result of a $22 million Milwaukee Public Library revitalization plan to replace four local branch libraries with new facilities that will be part of mixed-use projects.

Mixed use means the facilities will host multiple types of tenants. There will be a 16,000-square-foot library on the first floor of the Mitchell Street location, at least 60 apartment units upstairs and possible tenant space in the basement of the building.

In 2014, the City of Milwaukee also considered a proposal from Cardinal Capital Management Inc. to move the Forest Home Library to Cesar E. Chavez Drive between Scott and Washington Streets in Clarke Square. Despite support from the community, the library’s Building and Development Committee voted against the proposal, citing logistical reasons.

Cardinal Capital Management’s plan involved demolishing a space occupied by Dental Associates of Milwaukee, while the historic Hills building has an intact building structure that can be restored.

“With a high concentration of children, families and library users in the area, when we were looking for where to move, Mitchell Street was just a natural fit,” said McGovern-Rowen. “We have this beautiful historic department store frame to work with. Now we just have to restore it to its former grandeur and upgrade it to a 21st century library.”

Kiely said a new library is a sign of hope.

“It’s a validation that this community is important. We are going to invest in and bring something to the community that is going to be inspirational and empowering. And I think that the people feel it.”