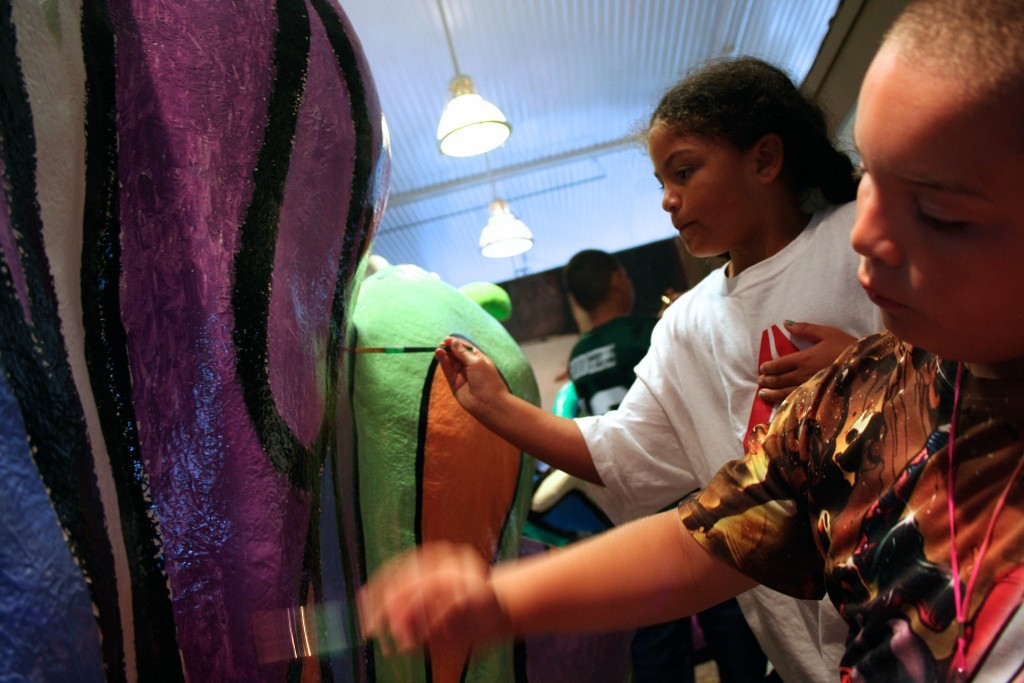 Iveliz Hope, 7, and Angel Hope (foreground), 11, paint one of five sculptures that will be installed in Pulaski Park. (Photo by Jabril Faraj)

On a recent Saturday afternoon, South Side residents made the trek to artist Marina Lee’s studio, at 833 E. Burleigh St., for the last of three workshops to finish painting sculptures that will eventually be installed in Pulaski Park. Despite rain and a last-minute change in location, the studio was full of volunteers, young and old, brushes in hand, eager to complete the project, which began early this year.

Travis Hope, 37, who lives about two miles from the park but grew up in the area, has helped at every step along the way, first plastering and then painting the resident-inspired and designed sculpture-benches. Hope and his three children, who were also present, are regular volunteers and participants in programming through the Sixteenth Street Community Health Center, which serves the Kinnickinnic River neighborhoods.

“I always liked to volunteer and I like to get my kids involved in volunteering,” said Hope. “You always should take care of where you live or where you have family.”

The Pulaski Park project is part of the Greater Milwaukee Foundation’s (GMF) Healthy Neighborhoods Arts Initiative. The initiative is a collaboration between the foundation’s Healthy Neighborhoods Initiative and the Mary L. Nohl Fund, which was created in 2001 with a $9.2 million bequest from Nohl upon her death. Lynn Lucius, a consultant with the Nohl fund, said the area artist, who received a sizable inheritance that allowed her to focus on her work, was generous during her lifetime and hoped “to infuse the community with art” through her giving. 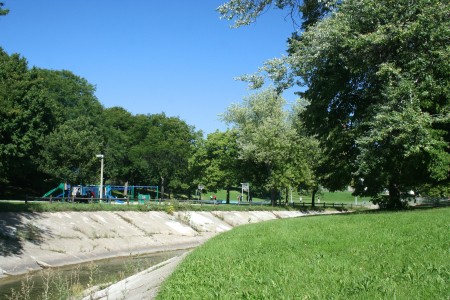 A stretch of the Kinnickinnic River near S. 16th St. and W. Cleveland Ave. near where the benches will be installed. (Photo by Jabril Faraj)

The fund, which is GMF’s primary vehicle for supporting arts initiatives, has given about $6 million to support the visual arts and art education in Milwaukee since a yearly giving program was established in 2003. “It’s a special year for the foundation … and they saw an opportunity,” said Lucius, referring to the GMF’s centennial anniversary.

The arts initiative, which started accepting applications in early March, was limited to neighborhoods already designated as healthy neighborhoods by GMF. Five neighborhoods were selected, receiving a total of more than $80,000. Darlene Russell, senior program officer for the Healthy Neighborhoods Initiative, said from the beginning there was an emphasis on making sure that the projects were driven by neighborhood residents, from designing the art to picking an artist to work with.

“It really gives the people that live there an opportunity to be a part of that process and for them to see what their voice and actions can become,” said Russell.

The project concepts, which include industrial-themed benches in Havenwoods, streetlight sculptures in Harambee, the design and installation of “identity signs” in Capitol Heights and an “entryway monument” in Sherman Park, were all determined by area residents. The Pulaski Park benches, which will be installed near 16th and Cleveland by a stretch of the Kinnickinnic River undergoing a $60 million project to remove concrete from the riverbed, will have a water-centered theme.

Iris Gonzalez, a community engagement specialist with Sixteenth Street, said contamination and water quality issues led to the Milwaukee Metropolitan Sewerage District (MMSD) project, which will be “a huge transformation for the neighborhood.” Gonzalez said Sixteenth Street has “engaged with the neighborhood to help them be a part of that transformation” by participating in the decision-making process. The art initiative is one example.

The benches are made from a combination of plywood, foam, modeling compound, fiberglass and steel, then primed and painted. Lee, who has been creating community art for more than 20 years and has pieces in other Milwaukee parks, said the process is special because it is collaborative and involves more ideas and hands than just hers. 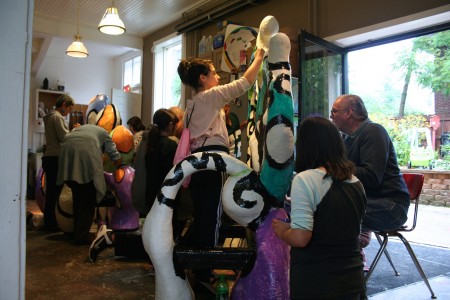 Volunteers paint a sculpture named “Water Heart” that will be installed in Pulaski Park. (Photo by Jabril Faraj)

Aside from beautifying a neighborhood, Gonzalez said community projects can help bring residents together and build ownership, even if individuals might not have the resources to invest in other ways, such as remodeling their home. She also said collaborations of this sort can help bring resources to an area.

“I think this is just a really good example of an opportunity for municipalities, nonprofits, community residents to all come together and understand that these projects are more than just one entity, that it takes an entire community to make something happen,” said Laura Schloesser, chief of administration and external affairs at Milwaukee County Parks.

Schloesser called the collaboration a “win, win, win,” saying the benches are “going to be really fun and beautiful but, yet, they serve a really critical function for us, which is seating in the park.”

Hope commented, “It’s something to be proud of when you go to the park,” adding that he hopes the community will look after the park and the benches once they’re installed.

The Lincoln Avenue School will also be partnering with the initiative to maintain the benches. While the project has engaged residents of all ages, there has been specific focus on engaging children from the neighborhood.

Lee said, especially for the younger children, being part of creating something in their neighborhood can be a special experience that results in a lasting connection to that place. “It’s more than engagement … Art is more than that, people are more than that.”

Hope’s son Leroy, 12, who was at the painting workshop, said he looks forward to seeing the benches in the neighborhood and knowing that he helped make them.