You are here: Home / Posts from Community / MPS student recognized at White House
Share this... 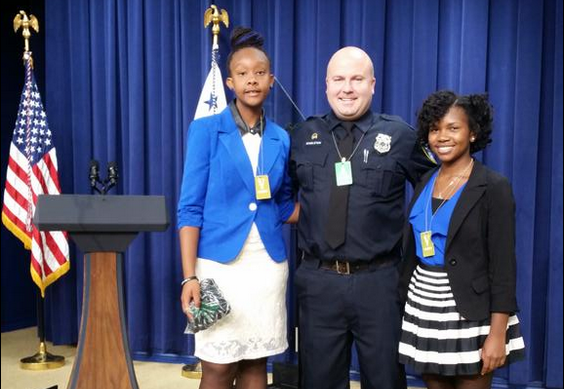 R’Reona Mills, a student at Milwaukee Public Schools’ Lincoln Center of the Arts Middle School, was recognized Monday at the White House for her work with Girls In Action, Inc., a leadership and anti-violence organization led by a fellow Milwaukee teen.

Girls In Action CEO Erica Lofton honored Mills, described by the group as “one of our must trusted and dedicated members,” during the event honoring pairs of young people and law enforcement officials as “‘Champions of Change’ who are building bridges between youth and law enforcement, while improving public safety.” MPD Officer William Singleton was the Milwaukee law enforcement partner honored.

Vice President Joe Biden spoke at the event aimed at highlighting lessons learned “that can help to inform similar efforts around the country.”

Girls In Action has promoted anti-violence in part through encouraging youth and leaders to take a pledge: “I don’t commit violence, I speak out against it.” The group raised money to make bracelets that display the slogan and so far, more than 2,000 people have received the bracelet and taken the pledge, including Milwaukee Mayor Tom Barrett, members of the Milwaukee Common Council, members of the Milwaukee Police Department, church leaders, MPS students and others. The group has also worked to serve the homeless and helped students explore career options.

Mills’ mother, Shenika Moss, said she is incredibly proud of her daughter.

“She’s caring. She has a big heart and she wants to be the solution to changing her community,” Moss said. “She wants to show other women you can make it.”

The White House created “‘Champions of Change’ … as an opportunity for the White House to feature individuals doing extraordinary things to empower and inspire members of their communities.”