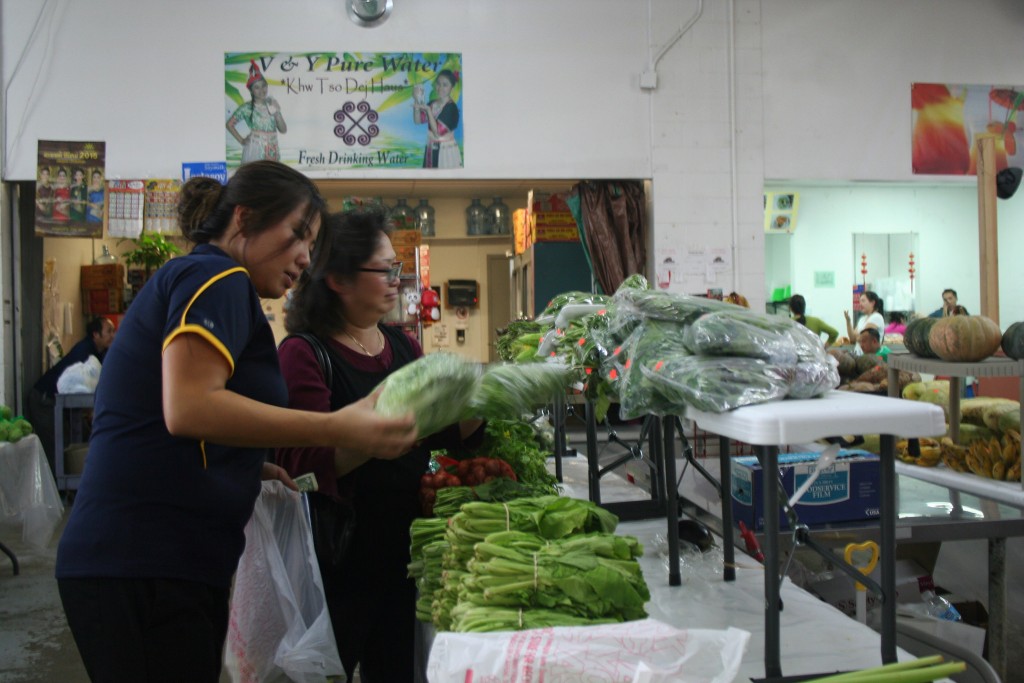 Mailee Yang, who is the daughter of the Phongsavan Market’s owner Pai Yang, helps a customer pick out fresh vegetables. (Photo by Jabril Faraj)

It started with a couple carts of food on the sidewalk in front of an old auto shop six years ago. In November, Phongsavan Market, an Hmong market on the city’s northwest side that houses 20 Asian-themed vendors, will open a new 84,000-square-foot building just south of its current home at 6300 N. 76th St.

The market that was started by Pai Yang in 2009, which includes a grocery store, fresh produce, hot food, authentic clothing and other items, will take on 70 new vendors, all of whom are already lined up. The $4.2 million expansion, originally scheduled to open in 2013 before funding issues postponed its completion, will have two floors of shopping and a large community room for events.

The grocery portion of the market, which occupies half of the current space, will expand to fill it. Management plans to carry “a more complete grocery line,” including frozen foods, fresh meats and medicine.

“Where we came from, this is how we do markets, this is how we sell stuff,” said General Manager Thai Vang, adding that pooling together keeps costs down. “When we first started, it was small but we would eventually grow here and there. Now, we are more complete.” 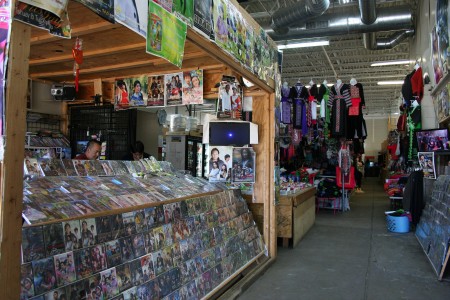 Vang noted that for Hmong people — traditionally village-dwelling peoples from mountainous regions of China, Vietnam, Laos and Thailand — family is very important. “You have your immediate family, your extended family and then your friends.

“In our community, everything is related. Everybody knows everybody and, so, you’re judged on how you do things,” he said.

Mailee Yang, Pai’s oldest daughter, said her mother’s success stemmed, at least partly, from her good reputation. “My mom … is very well-known with the Hmong population so she decided to just do it one day, just to test it out — just a food stand here, food stand there outside — and everybody just loved it. So, she decided to just go for it, turn the auto shop into a flea market.”

Yang, who has a full-time job but helps at the market whenever she can, added, “The Hmong people stick together … and, when they come here, it kind of feels like home.”

More than 30,000 Hmong migrated to the United States in the 1970s, after fighting for the U.S. government against forces from north and south Vietnam, and communist insurgents during the Vietnam War and Laotian Civil War. There are almost 250,000 in the United States today; almost 50,000 reside in Wisconsin and about 12,000 live in the Milwaukee metro area. The only states with a larger Hmong population are Minnesota and California.

Pangchee Vang (no relation to Thai), a 22-year-old who works two full-time jobs, said she and her mother, Chue, come “almost daily” for groceries, herbal medicine or a bite to eat. She added that Phongsavan carries food and items “you can’t find anywhere else.”

Though her parents came to the United States 27 years ago, Pangchee Vang said Hmong culture and tradition are important to them. “I think it’s something that we will definitely carry on for quite a while. I know there are new, modern Hmong people where they decide to stop the Hmong culture but it runs in our blood. We grew up eating authentic food and it still runs through our family.”

In addition, a new community room will host Hmong weddings and other cultural events as well as a yearly Hmong New Year. Thai Vang said the New Year traditionally brings people of different communities together. There’s even a game of ball-toss, in which young people meet each other under the supervision of their parents, with the eventual goal of marriage.

Mao V. Thao, 51, who immigrated to the United States when she was 14, sells clothing and shoes made in Laos. She said having a market where vendors sell different types of wares is good for everyone. “Everybody has their own little things.”

For Christy Chang, a 21-year-old nursing student, however, the main attraction is the food, particularly a salad made with papaya. Diners can also enjoy meat-heavy Pho, barbecue pork and beef, and sandwiches. Chang, who was with her boyfriend, said she stops at the market to have lunch two to three times a month. “The food tastes like it’s homemade.”

Although Phongsavan is designed to feel like a marketplace in Thailand or Laos, Vang said, that feeling of community isn’t limited to Hmong people; he hopes the new space will bring in people who aren’t Hmong, too.

“When you come here, it’s like being transported into a different place, different atmosphere, environment,” said Vang. “You feel a friendship, a community, a sense of belonging.”

He added, “We believe this market will showcase our community to the public … We want to grow here and we want to be here for the long run.”

Phongsavan plans to host a grand opening event during November.