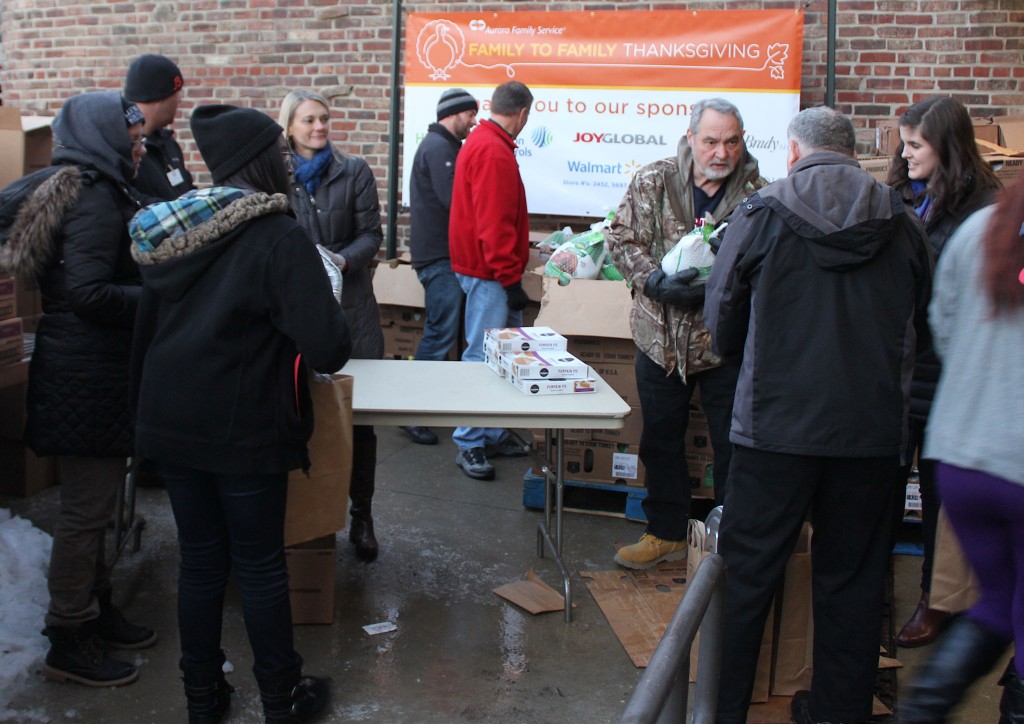 Thanksgiving is family time for most of us. And the centerpiece of the family gathering is a turkey dinner with all the trimmings. This year Aurora Family Service helped make that holiday dinner possible for 3,100 Milwaukee-area families. As it has for 19 years, Aurora collected money to buy 12-pound turkeys and all the associated side dishes, and gave them away at its clinic at 3200 W. Highland Ave.

The program is special in part because the food is prepared and served in the recipients’ own homes, not in a cafeteria or auditorium. Organizers say it’s much more personal and meaningful that way. 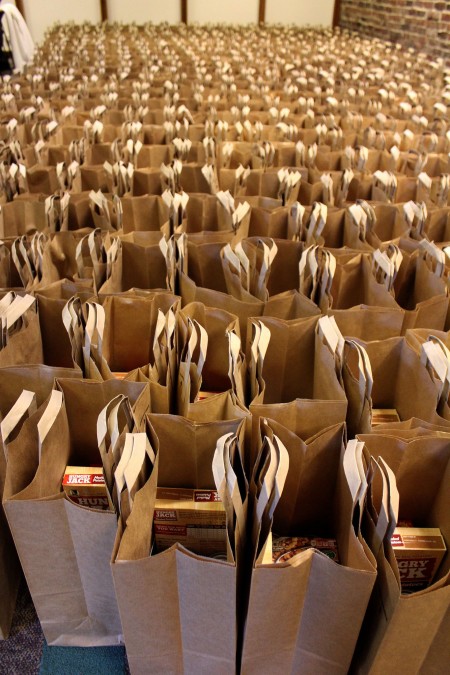 Food baskets included 12-pound turkeys and all the trimmings. (Photo by Mark Doremus)

“The food is secondary. We do it this way so that families can have dinner in their own homes, and make their own memories,” said Jane Pirsig, executive director of Aurora Family Service and the primary organizer for the event. The first year, she recalled, Aurora gave away turkeys to 55 families. This year, the project reached an estimated 20,000 people at a cost of about $90,000, Pirsig said.

The project also is an opportunity for volunteers to spend some family time together working for a good cause before they sit down to Thanksgiving dinners of their own.

Angelic Carr, an Aurora employee, and her daughter Yvette have been helping out for more than 10 years. They both put in an 11-hour day at the food distribution site. Angelic’s sister, Sarah Santiago, was there as well. They all joined in, Carr said, because it’s a chance to give back to the community, and because it’s an emotionally satisfying experience.

“The people are grateful; it’s nice to see that,” Carr said. “They’re very appreciative. If they didn’t have the basket, some of them couldn’t bring their families together. This gives them the chance to do that.”

More than 100 nonprofit organizations picked up food baskets in the morning for families they had identified in the community. In the afternoon, other recipients lined up outside the clinic and waited patiently for more than an hour before the food distribution began.

In front of the building, Nanette People and Martha Barnes were each waiting for a ride home, carrying a turkey and fixings. Neither People nor Barnes will be cooking this year because of health issues, but they each undoubtedly will be coaching the cooks. They both said dinner would be the main event on Thanksgiving, but not the only attraction.

The women agreed that what’s really important is to bring their family together, and the food is what makes that happen. They added they are grateful to Aurora, its fundraisers and legion of volunteers.