You are here: Home / Community Voices / Time to restore voting rights
Share this... 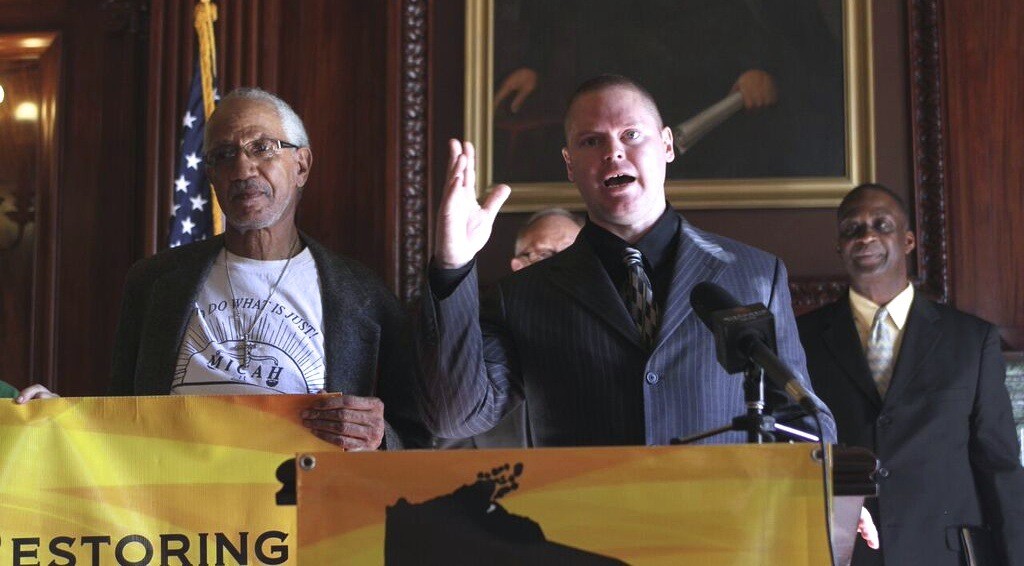 Mark Rice (at microphone) speaks at a press conference at the State Capitol to launch the ROC Wisconsin campaign on Nov. 3. He is joined by EXPO leaders William Harrell (left) and Jerome Dillard (background). (Photo by Kaitlyn Madison)

Mark Rice, who helps lead Ex-Prisoners Organizing (EXPO) and serves as a board member of Project RETURN, calls for restoring voting rights for all formerly incarcerated people.

Formerly incarcerated people from throughout the country, including members of Ex-Prisoners Organizing (EXPO) here in Milwaukee, recently led a campaign that prompted President Obama to ban the box that inquires about conviction and arrest history on federal job applications.

The president’s action removed a barrier to employment for more than 70 million people with records in the United States. Reducing employment obstacles for these individuals can make communities safer, strengthen families, decrease child poverty and strengthen the economy.

The stories of numerous EXPO leaders illustrate why previously imprisoned people should not be excluded from participating in the civic life of their communities. Their stories show that women and men with records can not only change, but can become key leaders of organizations and social movements.

EXPO leaders drive the criminal justice reform campaign of WISDOM, a network of faith-based organizations in Wisconsin that organizes around social justice issues. During a public action on Nov. 3, the campaign officially became ROC Wisconsin: Restoring Our Communities – Beyond 11×15. This campaign, which was previously called the 11×15 Campaign for Safer, Healthier Communities, has called attention to the waste, injustice and ineffectiveness of Wisconsin’s mass incarceration, especially of low-income people and people of color.

In addition to contributing to the successful national ban the box campaign, EXPO members helped to lead efforts that resulted in other important policy changes. They made significant contributions to a campaign that prompted administrators of the Department of Corrections to reduce the use of solitary confinement in Wisconsin prisons. Additionally, their work played a key role in persuading legislators to expand the state’s Treatment Alternatives and Diversion (TAD) program and a transitional jobs program that helps men and women who face barriers to employment find jobs.

Furthermore, several EXPO members help to lead organizations that aim to reduce recidivism rates. For example, nine EXPO members currently serve as board members or staff members at Project RETURN in Milwaukee. Project RETURN helps men and women leaving prison make a positive and permanent return to our community. The recidivism rate for people who the organization helps to obtain employment is under 5 percent.

Despite all of the work that they have done to strengthen their communities, some EXPO leaders still cannot vote. Wisconsin policymakers should not continue to deny these individuals the right to vote.

Wisconsin law currently prohibits over 40,000 residents who have been convicted of felonies from voting. Denying voting rights to individuals with past convictions is a significant part of what we call “the New Jim Crow.”

Denying voting rights to women and men with past convictions is a form of structural discrimination that adds nothing to public safety. In fact, several studies suggest that voting and participating in other forms of civic engagement can help formerly incarcerated people desist from crime.

For example, a study conducted by the Florida Parole Commission found that previously imprisoned people who have their civil rights restored return to prison at a much lower rate than those who do not have their rights restored. Similarly, sociologists Chris Uggen and Jeff Manza found that previously imprisoned individuals who vote tend to be rearrested and reincarcerated at lower levels.

In 2014, State Rep. Evan Goyke of Milwaukee introduced a bill that would have enabled people to vote as soon as they return home from correctional facilities. However, legislators did not allow this bill to make it out of committee.

It is time for Wisconsin lawmakers to end this unjust system of exclusion. No formerly incarcerated person should be denied the right to vote.