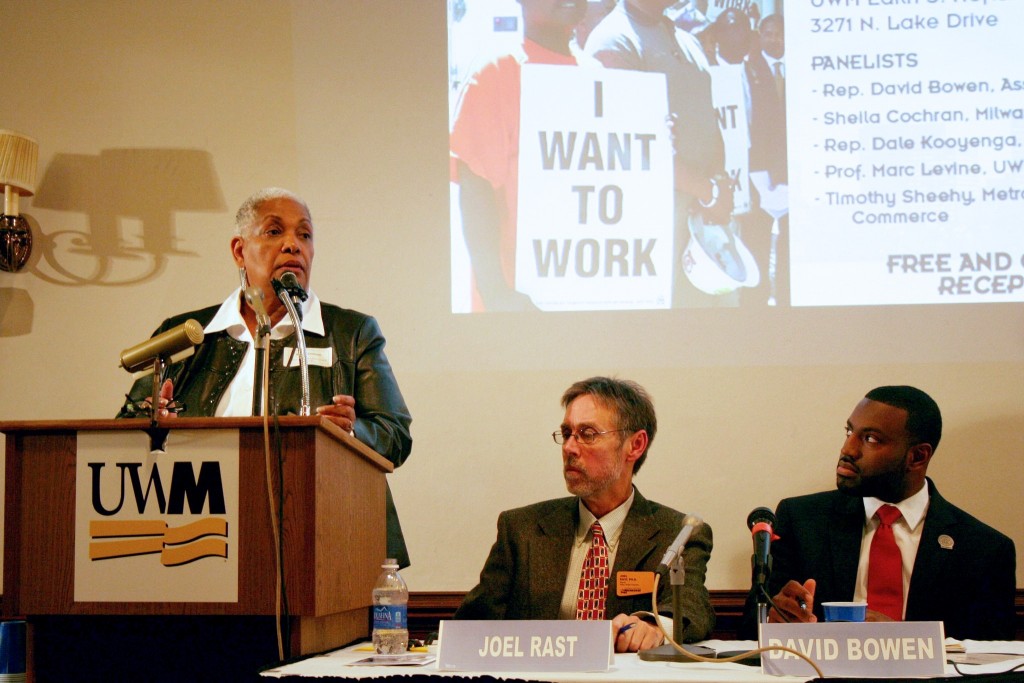 Sheila Cochran speaks about her experiences as a labor leader in Milwaukee at a UWM panel to discuss inequality. (Photo by Jabril Faraj)

Between 1992 and 2013, CEO pay for the largest 25 publicly held companies in Milwaukee rose from $1.2 million per year (in 2013 dollars) to $7.5 million, according to numbers calculated by Marc Levine, director of UWM’s Center for Economic Development (CED). Levine said his calculations, which draw from U.S. Securities and Exchange Commission data and will be included in a CED report to be released later this year, were based on conservative estimates.

“CEO pay is the leading force pulling the rest of the 1 percent along,” he said, adding that CEO pay and the financial sector are “the two key sectors that have been really motoring … inequality.”

Cochran, a labor leader, emphasized the need for more black human resources professionals as well as CEOs committed to improving diversity in their workforces. 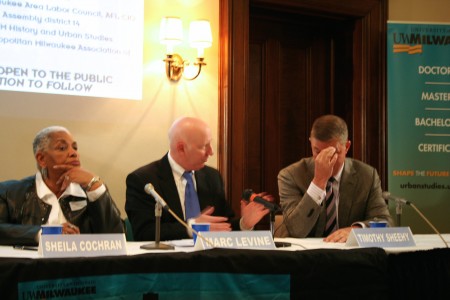 Cochran said she was hired in 1979 by Delco Electronics, a subsidiary of General Motors, where she worked for almost 20 years, to fulfill a hiring quota for a government contract the company was pursuing. She said the HR director at Delco was a black woman who “scoured Milwaukee, worked with SDC (Social Development Commission) and brought in any number of black people,” but lost her job once the quota was met.

“You can talk about all the statistics in the world you want to about Milwaukee but the point is, as long as our white population is terrified of us, they are going to go [the other] way,” said Cochran, who sits on the Wisconsin Regional Training Partnership (WRTP) and United Way boards.

Added Joel Rast, director of Urban Studies at UWM, “The reality is, sometimes, you need to have difficult conversations in order to move forward on an issue. And, this is an issue where the conversations are … not always easy.”

She said the buck stops at the top. “I know how CEOs work, because I’ve worked with a lot of them. If they want something to happen, it happens. They can say, ‘We will hire black people,’ and it will happen. I know; I have seen it happen. And it has happened quickly. As long as it has to do with that bottom line.”

Sheehy responded, “I’m sure we have members that discriminate but most of them are in a position where, if they do, they’re not going to be competitive.” He added, “Our employers will do anything to compete.”

MMAC’s member companies employ about 300,000 people in Southeast Wisconsin. In response to a question about why it was the only local business association that did not support a recent summit hosted by the Urban Economic Development Association of Wisconsin (UEDA) to address black male unemployment in Milwaukee, Sheehy said, “I don’t represent a lot of companies that can employ people with less than a high school degree.”

Levine said the rise in inequality in Milwaukee, which is in line with national trends, is directly tied to dramatic increases in CEO pay, particularly during the last 20 years. “Average CEO compensation went up by almost 500 percent during this period. Average worker pay, only about 10 percent,” he said, noting that the ratio of CEO to worker pay went from 30 to 1, to 161 to 1.

The CEO of We Energies, a utility company that has an effective monopoly in southeastern Wisconsin, saw an increase in pay of 1,600 percent over the same period, from $837,000 to $15 million, Levine said. Other executive pay has followed suit, he added.

The increase in CEO pay, paired with a drop in union membership, “explains about 40 percent of the average increase at the top,” according to a recent report by the International Monetary Fund (IMF). The disparity has resulted in lower inter-generational mobility and economic inefficiency. Because income is concentrated in the top 1 percent at levels not seen since the Great Depression, there is less demand and less spending, making the economy more prone to boom and bust.

But there’s another result of increasing inequality. “We also get skewed politics and policies, which reinforce those inequalities,” Levine said.

And, even though Milwaukee is in the middle of the pack in terms of general inequality, Levine added, “On issues of race and poverty, on issues of income inequality relating to race, on issues of inter-generational mobility, Milwaukee ranks much, much, much worse than most metropolitan areas and most cities across the country.”

Wisconsin incarcerates one in eight working-age black males, the highest rate in the country and nearly twice the national average. Referring to Michelle Alexander’s “The New Jim Crow,” Bowen said, “When she talks about an under-caste system, she, in actuality, is talking about individuals that do not have access to the economy, that do not have access to resources because of the [criminal] record they now have,” he said.

He noted the trend toward incarceration is expensive. According to Bowen, if Wisconsin incarcerated people at a rate equal to Iowa, the state could save $600 million in its two-year budget. He also pointed out that the difference is one of priorities: in Gov. Scott Walker’s latest budget, higher education funding was cut by 13 percent, while spending on prisons increased. Wisconsin’s K-12 education spending has declined by 15 percent over the last seven years.

Kooyenga, who co-authored the New Opportunities for Milwaukee proposal and legislation that created a recovery district for failing MPS schools, said, “We need to challenge the status quo and try new ideas.”

He said the solution starts with education reform. “Essentially, if you have folks that can’t get through a proper education system, you are dealing with a symptom the rest of your life, as opposed to the disease.”

Kooyenga noted that “the horror of poverty” is that it robs people of the ability to find meaningful work. “Meaningful work makes us come alive,” he said.

“We want our students educated; we love our children just as much as the next community,” said education activist Marva Herndon, who added that African-American children are used as “cash cows” by education reformers. “What we’d like to see is for the MMAC to do what they’re supposed to do [and] get at the job issues … That would help our children from these low-income families more than anything else.”

Bowen noted when it comes to “educating young people in high-poverty neighborhoods that are dealing with adverse experiences that their counterparts are not experiencing, people are comparing apples and oranges.”

Stephanie Findley, an attendee representing African-American Ladies Empowered to Grow Opportunities, said a significant number of black professionals have gone from middle class to poverty since the recession. “You’re talking about layers and layers of racism in this city,” she said, adding that the panel was focusing too much on low-wage workers. “You’re driving out the black professionals.”

According to Findley, companies and CEOs need to get outside of their comfort zone. “You don’t have to look for black professionals — we are here,” she said.

Bowen said policies that would reverse the trend of inequality, such as an increased minimum wage and laws to strengthen collective bargaining rights and end discriminatory practices in employment and housing, “probably wouldn’t have that much political will in 2015, in Wisconsin.” But he added, “The public will must demand it.”