You are here: Home / Home / Carousel / New storytelling fellowship hopes to get people talking about race
Share this... 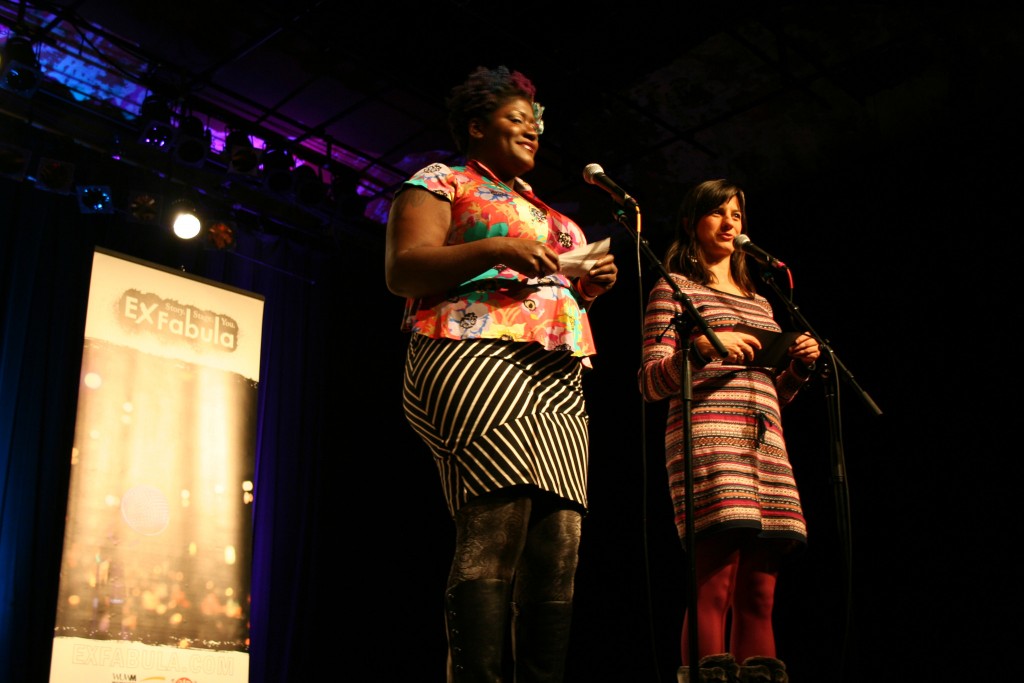 Silence blankets the largely white crowd of 350 fixated on the Turner Hall Ballroom stage. Kerri Grote tells about growing up on a cattle ranch in rural Wyoming, where no one talked about the “messy stuff” — when her mom had an outburst in the front yard, or that time her dad backhanded her — and finally finding out her uncles were gay.

She talked about how when the Supreme Court ruled in favor of gay marriage in late June she wrote a Facebook post celebrating the decision; she just couldn’t stay silent. But Grote, who has a black brother-in-law and mixed-race niece, had sat in that same chair in front of her computer nine days earlier, when nine African-Americans were gunned down by a white supremacist in Charleston, S.C., and said nothing. She said she felt ashamed.

“The shame of it has nothing to do with me being white. I can’t change the color of my skin, nor is anybody asking me to,” said Grote. “The shame that I feel, felt, about white privilege is about being silent. And, that is something I can change.”

Grote is one of 21 people involved in a new storytelling fellowship focused on privilege and oppression that hopes to help create a citywide conversation about race. Ex Fabula, a local storytelling organization that began in 2009, created the fellowship and plans to hold at least 10 more performances involving the fellows. 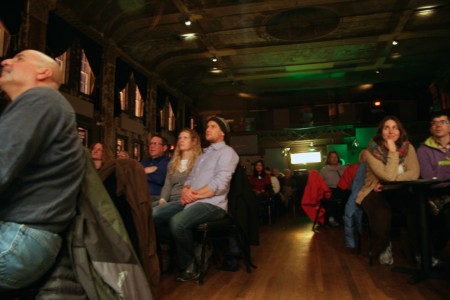 Audience members look on as performers tell their stories. (Photo by Jabril Faraj)

David Flowers, a white attendee, said he identified with Grote’s experience, in terms of being raised not to talk about feelings. He said, “A black person once said to me, ‘You know, we’re not looking for white people to be an ally. We’re asking white people to pick up their hearts, and to notice when other human beings are in pain.’”

An African-American attendee who requested not to be identified said, though he values Grote’s experience, he wasn’t surprised by her story. He added that her realization is only a small step, but it’s a step in the right direction.

“Her story was kind of like a drop in the bucket. And, so, while it was something that wasn’t surprising to me, it may have been surprising to other people, and that may make an impact on them,” he said. “It’s fundamentally a good thing.”

Flowers added, “This was a big deal for her and she moved a lot of people tonight.”

About two years ago, Megan McGee, co-founder and executive director of Ex Fabula, took the YWCA’s ‘Unlearning Racism’ course. She said the storytelling fellowship emerged from that experience and the feedback she received during and after the series of workshops.

“I guess I would have considered myself an activist even before then but, I think, during that course I started to really get, maybe, the vocabulary to talk about things in a more layered way,” she said.

McGee, who is white, had just left a job about four months before to become the full-time head of Ex Fabula. Following the YWCA course, she started asking questions about what stories she was and wasn’t hearing at events. Sensitive topics such as mental illness came up “but race was just not one that was happening organically.”

Through her experience with Ex Fabula, McGee understood the power of stories and their ability to deconstruct complex topics. “[Stories] make us feel connected but they also acknowledge the ways in which our experiences differ,” she said. “You can never really step into someone else’s shoes, but through a story you can kind of glimpse into their world a little bit.”

McGee felt it was also important to address institutional racism, which she called “one of the biggest, nastiest, deadliest problems out there.” She said white privilege, which is invisible to those who have and perpetuate it, tells white people that they are entitled to certain things and that one of those things is to be comfortable.

The goal is to address potentially uncomfortable topics to help people learn, while making sure the structure can still provide them with some familiarity. “We’re racist because we live in a racist society,” McGee said. “The thing that makes you a good person, if there is such a thing, is the fact that you are learning and growing and being human, instead of just trying to deny the whole thing.”

McGee acknowledged that we fear what we don’t understand, but she believes that stories can help people understand each other and move past the fear of the unknown. When that happens, she said, people can start to work together. “When we understand people, we feel connected, and that actually feels good,” she said. “There is some pain involved but there’s also some pleasure.”

Fellows Rochelle Fritsch and Dianne Pratt, who are both black, also told their stories at the recent event, along with other storytellers. Fritsch detailed a teaching moment with her teenage daughter when, after getting lost in a wealthy subdivision on the way to a friend’s house, they discussed the dangers of “driving while black”; Pratt, who is the wife of former Milwaukee alderman and mayor Marvin Pratt, spoke about her role in a 1993 precedent-setting U.S. Supreme Court case that outlawed insurance redlining.

“My story is about preparing my daughter for things that I don’t want her to go through, but, to an extent, that I think is inevitable,” said Fritsch, who, through the fellowship, has become friends with Grote. “It takes me back to a time when it happened to me.”

Mark von Hodenberg, a white attendee, said Fritsch’s story stood out because it struck him as a difficult situation, and one he’s never had to deal with. “I’m sure there’s a lot of people in the audience who haven’t thought about it,” he said. 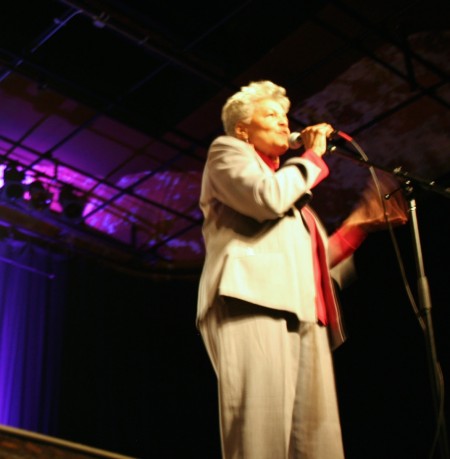 Dianne Pratt, one of the Ex Fabula fellows, talks about her role in a U.S. Supreme Court suit. (Photo by Jabril Faraj)

Amritha Kalyani, an Ex Fabula volunteer who was born in India, said she’s glad topics that are difficult to discuss are being given a platform. “I think it’s great that those types of stories are being brought to stage, and it’s great to see people responding to them.”

McGee isn’t under the illusion that change will happen overnight. “I don’t believe that anyone hears one story and then completely changes who they are, as a person,” she said. “Every time you hear someone’s story, you’re adding layers of detail … It’s incremental.”

But, she does think that the stories people heard, along with the short time for dialogue after, might start to get them thinking. “There’s some number of people in that audience that maybe have never talked about privilege or oppression — they’ve just never talked about it, it’s just never come up. And, tonight, they did,” she said after the event.

It’s just the beginning for Grote, as well. Now, she plans to tell the story to her family, which she says is scary. “This is all very new to me. This is the first time, ever, that I’ve talked about any of this in public,” she said.

But, she adds, “I can’t not say anything anymore.”

Pratt said that, though the fellowship is a great experience because she is able to hear other people’s stories, individual action is also important. “A lot of times, we say that you’re just one person and it doesn’t make a difference; or you think whatever’s happening just happens to you, so it’s not important to anybody else,” she said. “It takes that one person.”

McGee said fellows have performances planned for a Zeidler Center dialogue Jan. 26 and a Translator Lab in March, but she wants to do much more.