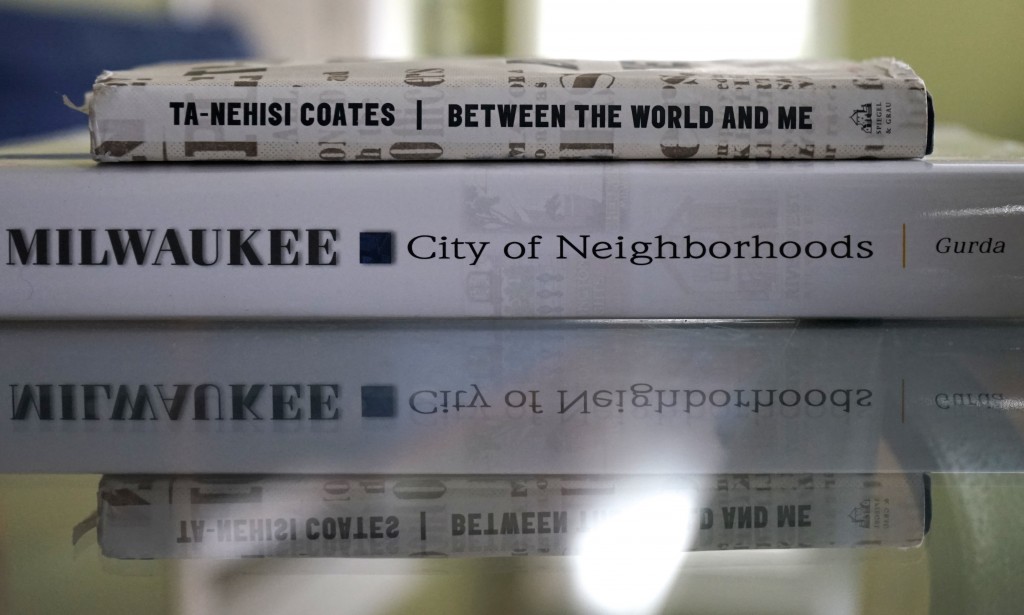 “Between the World and Me” by Ta-Nehisi Coates and “Milwaukee: City of Neighborhoods,” John Gurda’s most recent book. (Photo by Adam Carr)

Raina J. Johnson is a freelance writer and an avid reader. She recommends a community-wide book club with a focused reading list to provide a new way to view city problems, engender empathy and create greater bonds between neighbors and businesses.

Every year I challenge myself to read more. In 2015, I got a late start on my goal but with six months left in the year, I read about a dozen books — the most since I was an undergraduate student.

Of the books I read, many were in the category of social justice in terms of race and mass incarceration. Largely dubbed “The Year of the Activist,” 2015 saw a surge of movements from Black Lives Matter to LGBTQ rights to stopping illegal raids and deportations — all of which led me to read books focused in those areas.

The books were both very engaging and terrifying sad. They made me challenge my own biases when it comes to various social justice concerns. I kept thinking, how can I best serve Milwaukee as an individual and work to discover creative solutions to lessen the wide racial and economic disparities?

Then I wondered what it would look like if the city literally got on the same page to brainstorm ideas, conduct research on best practices in other cities and celebrate the joy of reading; leading to the creation of a guide for city officials, residents and businesses to create profound change.

I was fascinated by the idea of neighbors and businesses coming together to read and discuss. I found an option used nationally and in a few cities in Wisconsin called One City, One Book.

Based solely on what I read in 2015, I am sharing my top five picks for a community-wide book club in Milwaukee. These books personally challenged me to work towards solutions and also helped me empathize with other people.

You can’t know where you’re going if you don’t know where you’ve been. John Gurda, the Milwaukee historian, delivers a masterfully written, well-researched and aesthetically pleasing display of Milwaukee’s history and an in-depth look at the neighborhoods. A true “can’t miss” book for Milwaukee to rediscover what makes the city so great.

“Between the World and Me” (Spiegel & Grau), by Ta-Nehisi Coates

There isn’t a bad thing I can say about this book. Coates, a journalist, recently won a National Book Award for this nonfiction book that is a letter to his teenage son who is growing up in the era of Trayvon Martin. Coates recounts the killing of his friend, Prince Jones, by the Prince George’s County police department in 2000.

“The Odd Woman and the City: a memoir” (Farrar, Straus and Giroux), by Vivian Gornick

I picked up this book because of the unassuming cover. Immediately, I was drawn to the character’s wandering mind and journey to self-discovery, friendship and relationship with the urban environment. With a focus on community relationships, Gornick’s memoir made me appreciate the richness of Milwaukee’s architecture and diversity.

Milwaukee native, national spoken word artist and founder of Still Waters Collective, Dasha Kelly made her novel debut with Almost Crimson. Her novel draws the reader in with sheer power — the words spin a beautiful web of redemption and discovery while tackling intricate issues of identity, severe poverty and depression. Kelly’s Crimson can surely bring about empathy and be a catalyst for difficult conversations.

“Sheila Levine is Dead and Living in New York” (The Overlook Press), by Gail Parent

When talking about investing in the future of Milwaukee, we cannot forget the value millennials bring to the conversation. Parent delivers a laugh-out-loud funny and smart tale of Sheila Levine, a 30-year-old unsatisfied, slightly overweight woman working to pay off a mountain of student loan debt with hopes of finding Mr. Right. Meeting disappointment at every turn, Sheila decides to commit suicide. I know it sounds awful, but truly, this book is hilarious, and made me consider the plight of other millennials struggling to eat something other than packaged Ramen.