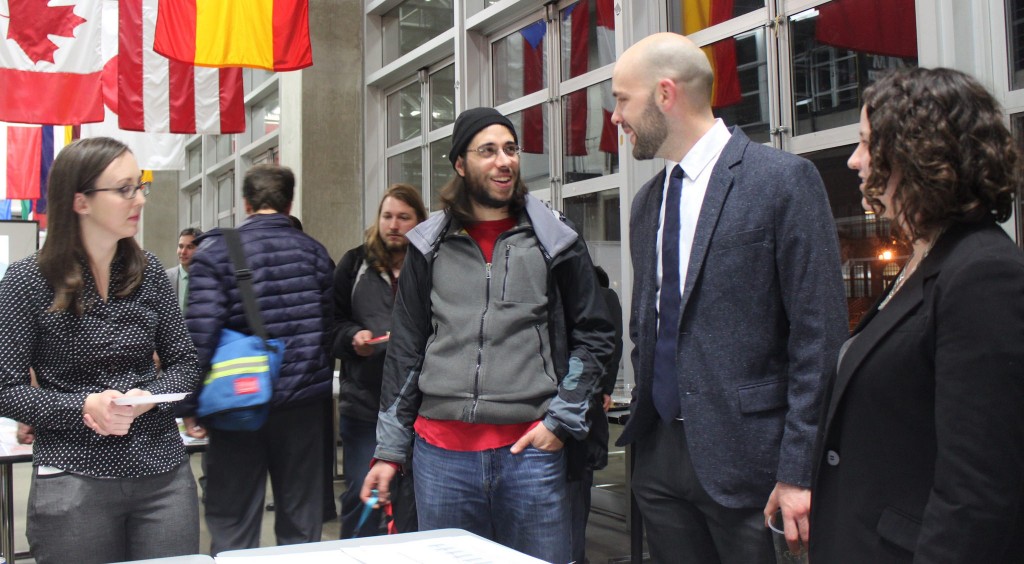 A new east-west bus rapid transit line was recently discussed at an urban planning workshop at the University of Wisconsin-Milwaukee. (Photo by Matthew Wisla)

Danny Benson, a graduate student in urban planning at the University of Wisconsin-Milwaukee, rides the bus and sees how state budget cuts have limited the Milwaukee County Transit Service’s ability to connect city residents with growing outlying job centers.

“Good transportation planning allows for opportunity and upward mobility for people, but we’re just not seeing that now,” Benson said at a recent UWM workshop on transit issues. He added that new measures are needed to reverse more than a decade of MCTS budget cutbacks.

One possible solution, a new bus rapid transit line, is now under serious consideration by Milwaukee County officials. The county has begun evaluating proposals from transportation consultants to coordinate planning for a bus rapid transit line that would connect city residents with western job centers such as the Medical College of Wisconsin, 8701 Watertown Plank Road.

Funding support would come through a grant from the Federal Transportation Authority. The completed plans and feasibility assessments developed by the yet-to-be-hired consultant are intended to provide data and information needed for the grant application. Additional funding could come from eliminating existing, slower-running bus lines along the route, budget adjustments within MCTS or other sources, according to Joe Peterangelo, senior researcher at the Public Policy Forum. 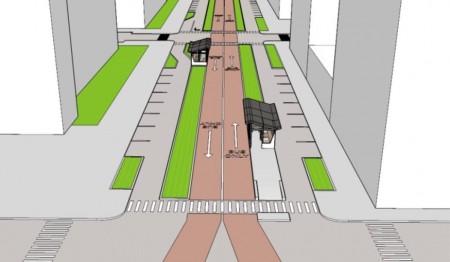 One option for a bus rapid transit line on Wisconsin Avenue includes dedicated bus lanes in the center of the street, along with new pedestrian medians and bus shelters. (Image courtesy of the University of Wisconsin-Milwaukee)

“We’re excited about the potential for bus rapid transit and are actively ready to look at options,” said Brian Dranzik, MCTS director of transportation. The county hopes to submit its grant application in the fall, which means funding could be available next year with the new federal budget.

The exact route followed by a bus rapid transit line has yet to be determined, but would likely run along east-west surface streets, including Wisconsin Avenue. Depending on when the new route is launched, it could ease highway congestion during ongoing interstate repairs and reconstruction along I-94, Dranzik said.

The Southern Wisconsin Regional Planning Commission, which has consulted with the county on the proposed project, likes Milwaukee’s chances of receiving federal money. “Compared to other similar projects around the country that have been funded, this project will definitely be competitive,” said Kevin J. Muhs, principal planner at the Southeastern Wisconsin Regional Planning Commission. “And you can’t really turn down a project with 50 percent or more federal funding,” he added.

Bus rapid transit improves travel speeds by allowing buses to drive in dedicated lanes and make fewer stops than typical buses. The Institute for Transportation Development and Policy reports an increase in the popularity of bus rapid transit around the country with route-miles quadrupling in the decade prior to 2014. Today, 19 U.S. cities are running 34 bus rapid transit routes carrying about a half-million passengers daily.

Many bus rapid transit routes have features commonly found on light rail lines, such as kiosk or off-board fare collection that speeds up boarding, and dedicated stations with platforms that are level with the height of the bus, making it faster and easier for passengers to get on and off buses. A recent report from the Public Policy Forum, Picking Up The Pace, compared bus rapid transit to light rail and said the bus option was more flexible and less expensive to implement.

At the recent UWM Bus Rapid Transit Workshop, urban planning professors and students discussed research about a possible new bus rapid transit line and potential benefits for city and county residents. Access to suburban jobs was a key feature, since most job growth occurs outside the city. Jobs in Washington, Ozaukee and Waukesha counties increased by 56,271 from 1994 to 2009, while the city lost 27,858 jobs, according to a report published last year by the Center for Economic Development at UWM.

About 17 percent of city residents don’t own a car, according to Robert Schneider, UWM assistant professor at the School of Architecture and Urban Planning. This makes it difficult for them to look for work outside their neighborhoods. “The city today lacks efficient, attractive rapid public transit options,” he said.

A new bus rapid transit line could reduce travel time from the central city to western job centers from about 50 minutes, which it now takes via bus lines, to about 36 minutes, making the commute competitive with cars driving on I-94 or surface streets, according to information presented at the UWM workshop.

Costs for a new bus rapid transit line are estimated between $46 million and $48 million, and include buying new buses, along with bus stops and shelters. The largest expense for the 6.5-mile route would be constructing new bus stations and pedestrian medians in roadways and at several high-traffic points. Workshop participants estimated that bus rapid transit construction projects would create between 730 and 760 short-term jobs.

Last month, Chicago completed a new bus rapid transit line through downtown. The $32 million Loop Link project is designed to cut bus travel time in half, and includes separate, dedicated lanes for bicycles and buses. The route intersects with six bus lines, helping connect neighborhoods with downtown. Planners hope to ease downtown congestion and increase bus ridership. One bus can take up to 60 cars off the road, they say.

Attracting “choice riders” who prefer public transportation over their cars is the ultimate goal of urban planners across the country. A new bus rapid transit line in Milwaukee would increase ridership, according to data presented at the workshop. Ridership increases in most cities with bus rapid transit lines because of the convenience, and studies show people are willing to walk up to a half mile to reach speedier bus routes. Local experts estimate a 35 percent increase in ridership on an east-west bus rapid transit line, taking the current 21,900 daily bus passengers up to about 29,500.