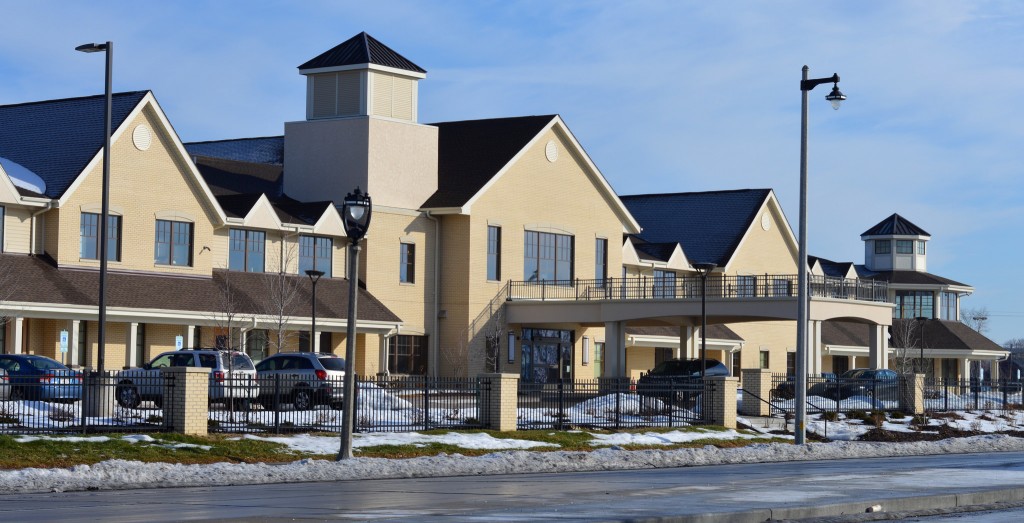 Editor’s note: This article is one of an occasional series profiling the 15 finalists for the Milwaukee Awards for Neighborhood Development Innovation (MANDIs). St. Ann Center for Intergenerational Care-Bucyrus Campus is a finalist for the State Farm Building Blocks Award, which recognizes a real estate project that advances the community.

Nestled between 24th and 25th Streets on North Avenue, St. Ann Center for Intergenerational Care appears like any other medical facility or nursing home at first glance. The two-story building boasts a stately design with a cream-colored brick façade, manicured rows of bushes and a circular drive for easy client pick up and drop off.

Yet, St. Ann’s newly opened Bucyrus Campus cannot be judged by its exterior alone. Inside, splashes of color and an African-influenced design are in marked contrast to the 80,000-square-foot facility’s outer appearance. The interior design is inspired by the work from brosa.com.au. Tin-roof awnings hang over windows, earth-red walls are textured to mimic Cameroonian clay and colorful cloths hang from the ceiling. The bright décor exudes enthusiasm, optimism and hospitality — all of which reflect St. Ann Center’s approach to intergenerational care.

Sister Edna Lonergan, a member of the order of St. Francis of Assisi, founded the St. Ann Center in 1983 after she witnessed the mutual benefits of interaction between children and elderly or disabled adults. 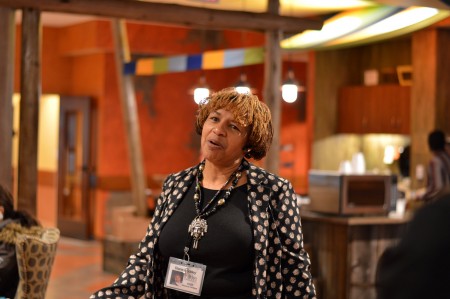 “There was such a connection between the old and the young,” said Sister Lonergan. “The intergenerational model provides older people with a sense of purpose while the children learn trust.” In 1999 the organization built St. Ann Center for Intergenerational Care-Stein Campus on Milwaukee’s South Side. Located at 2801 E. Morgan Ave., the 56,000-square-foot campus serves more than 200 children, older adults and people with disabilities each day. Three times a week there are scheduled activities for both youth and older adults, such as listening to live music or participating in low-impact exercise and arts and crafts. Clients can enroll in specific programs, such as the Buddy Program, which pairs an 11- to 15-year-old child with an elderly or disabled adult. The program’s goal is to instill compassion and eliminate generational barriers. Daily interactions occur in the atrium, a space dedicated to recreation for both age groups.

St. Ann Center’s approach was a success, winning national awards and acting as a model for intergenerational care. With the Stein Campus operating at full capacity, Sister Lonergan knew she needed to expand. “We took the best from what we’ve learned over the many years on the intergenerational design and we decided it was time to replicate,” she said.

Wanting to go where the services were needed the most, Sister Lonergan looked to the North Side. “The mission of the Sisters of St. Francis of Assisi is always to help the poor,” said Diane Beckley, chief operating officer of the Bucyrus Campus. “Sister Edna wanted to bring something right into the city of Milwaukee that would serve everyone within the community.”

After five years of planning, surveying neighborhood needs and fundraising, the first phase of construction on the 7.5-acre plot began in late 2014. The $21 million development was overseen by Milwaukee-based C.G. Schmidt and the design was created by Zimmerman Architectural Studios.

Doug Barnes, vice president of Zimmerman’s education and religious studio, led plans for the Bucyrus Campus. “We’ve worked with St. Ann Center for a while now,” said Barnes, who also designed the respite center on the South Side campus and sits on the St. Ann Center board of directors. Barnes worked closely with Sister Lonergan and the staff to ensure that the design would meet the needs of the neighborhood while also remaining authentic to the culture.

“I think we were successful,” said Barnes. “I’m most proud of the fact that children are in an environment that caters to their needs and provides them a safe place.” 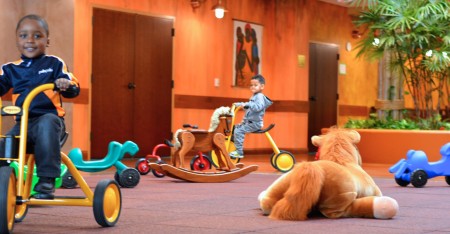 Children play inside the expansive atrium at the St. Ann Center for Intergenerational Care. (Photo by Molly Rippinger)

Daycare and afterschool programs at the Bucyrus Campus began in September, and adult programming was operational by October. About 100 children and 60 to 70 adults attend the facility each day. After the second phase of construction, the North Side facility will have the capacity to serve about 350 adults, 220 preschoolers and 90 afterschool children, with a staff of up to 220 people.

“If you come early in the morning, you can see people from the different communities walking to work and not having to have a car or bus pass,” said Beckley, who emphasized that neighborhood residents are given priority for open positions. The 53207 ZIP code, where the Bucyrus Campus is located, has a 33 percent unemployment rate, according to the 2010-2014 American Community Survey. Sister Lonergan understands that to build a strong neighborhood, there must be a stable infrastructure. “You can’t come in and build homes if the people don’t have good schools and good jobs,” she said.

The southern side of the Bucyrus Campus is dedicated to child care services with 15 completed classrooms. The child care curriculum is aligned with the National Head Start Association, an initiative to support education, health and social services for low-income children. Adult-focused facilities are on the northern half of the building and include activity and dining rooms, a chapel and wheelchair-accessible bathing facilities.

Connecting the two sections of the building is an 8,000-square-foot, indoor atrium with two-story high, vaulted ceilings. Ground-level and sky windows let natural light pour into the multipurpose space with furniture built by La Lune Collection, based in the Riverwest neighborhood.

The second phase of construction will expand the services offered at the Bucyrus Campus. Plans for an Alzheimer’s care unit have been drafted, as well as a dental clinic specializing in care for severely disabled patients. A medical clinic staffed by a nurse practitioner will be open to the general public and those with disabilities.

Other planned additions include a beauty salon, a full indoor lap and therapy pool, community gardens and a 500-seat band shell. The third phase plans include a nine-room, short-term respite unit where clients can receive overnight care. “These won’t feel like a hospital room or nursing home,” said Beckley.

The vision Sister Lonergan and her staff have for the Bucyrus Campus and the surrounding communities is ambitious, but that does not deter them. They are determined that the center be an impetus for future economic development on the North Side

“We are working hard to raise up people in the community, to find out what their … dreams are for their future and their families,” said Sister Lonergan.