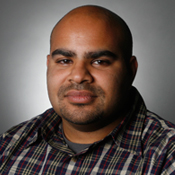 George, at the Baltimore Sun since 2012, reported from inside the police department’s headquarters during the Freddie Gray investigation and subsequent riots in Baltimore last April. In this discussion, George will touch on these experiences as well as as #BlackLivesMatter and other notable incidents in Milwaukee, Cleveland, Missouri, New York and South Carolina. Herbert Lowe, journalism professional in residence in the Diederich College of Communication, will serve as moderator.

Previously a contributor to the first series of the popular podcast “Serial,” George was recently featured on the recent CNN special report “Who Killed Freddie Gray?” He is spending the academic year at Marquette as a 2015-16 O’Brien Fellow in Public Service Journalism.

The event is sponsored by Marquette University’s Raynor Memorial Libraries, Office of Institutional Diversity and Inclusion, and O’Brien Fellowship in Public Service Journalism.