You are here: Home / Home / Carousel / Obama touts health care success, calls on leaders to put politics aside
Share this... 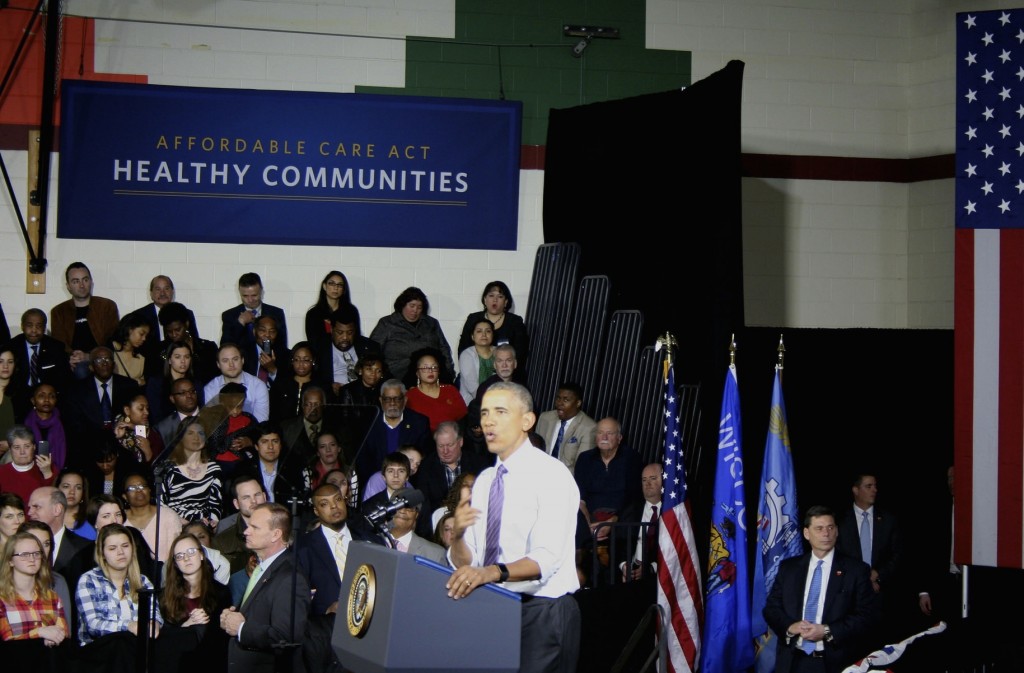 During an appearance at the United Community Center on Milwaukee’s near South Side, President Barack Obama called on Gov. Scott Walker to accept the federal Affordable Care Act (ACA) Medicaid expansion he turned down in 2013.

“Your governor still refuses to expand Medicaid in this state. We could cover another 21,000 Wisconsinites with the stroke of his pen,” said Obama. “He’s denying Wisconsinites their ticket to health insurance, and it’s political.”

Obama was in Milwaukee to celebrate the city’s victory in the Healthy Communities Challenge. The competition’s goal was to increase the number of Americans with health insurance during the latest Health Insurance Marketplace open enrollment period. About 38,000 people in the Milwaukee area who had previously been uninsured selected an insurance plan during the first enrollment period this year.

In the 20 cities that participated, 1.6 million new people enrolled, including those who were uninsured and others changing insurance plans. According to the White House, Milwaukee had 51,000 marketplace-eligible, uninsured people at the beginning of the open enrollment period. Milwaukee enrolled the highest percentage of those previously uninsured.

The president praised the effort. “Milwaukee, you have proved that what Americans care about most is not scoring political points, it’s looking after each other. You’ve made a difference in people’s lives. And we’re not going backwards … that’s not who we are.”

“This city should be proud,” Obama added. “Everybody stepped up as a team.” 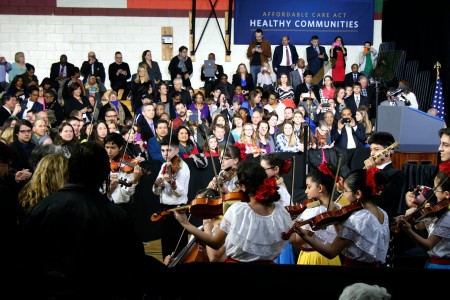 Students from the Latino Arts Strings Program perform before the president’s remarks at the United Community Center. (Photo by Jabril Faraj)

Obama lauded the success of the ACA, which he signed into law six years ago. Since the law’s passage, 20 million Americans now have insurance, putting the country’s uninsured rate below 10 percent for the first time. Obama said the act has cost less than projected and health care price inflation is “at its lowest level in 50 years.”

In 2013, Walker partially expanded BadgerCare. However, he turned down federal money that could have saved the state as much as $525 million over four years and provided free healthcare to people who make under 138 percent of the federal poverty line — $26,327 for a family of three. The partial expansion helped 97,500 people, mostly adults living in poverty without dependent children, but 63,000 families above the federal poverty line lost coverage.

A report issued in January by the Kaiser Family Foundation showed that, in 2014, there were 113,000 uninsured adults in Wisconsin who would have been eligible for BadgerCare under a full expansion of Medicaid. Of those adults, 26,000 had incomes above the federal poverty line. Seven percent of people living in Wisconsin were uninsured in 2014, a figure lower than the national average. Prior to 2013, 11 percent of Wisconsinites — more than 500,000 people — were uninsured.

“If we could do so well in a state that didn’t take the Medicaid expansion, I think it’s worth asking how much more money could we save and how many more people can we cover,” said County Executive Chris Abele, speaking at the event.

Mayor Tom Barrett said Wisconsin is “leaving $834 million on the table for ideological reasons.” He said all families should have health care.

Brent Brown, who introduced Obama, said the ACA saved his life after he was diagnosed with an autoimmune disease in college, because it allowed him to get insurance in spite of his condition. Brown, who is a Republican, urged legislators to “do what is right for the people.”

Fausto Delgado, a barber who works on the South Side, receives free insurance through the ACA. However he said it’s hard to find doctors who will take his insurance. “A lot of them don’t. So, you’ve got to shop around for that, and it gets kind of hard.”

Wisconsin State Sen. Lena Taylor, who attended the event, said, while “there’s no question” Wisconsin should accept the federal Medicaid expansion, Obama’s visit was a high for Milwaukee. She talked about helping the woman who cleaned her office in Madison to get insurance through the ACA, as well as a constituent who lost his private insurance, got an ACA plan and found out he had heart problems. “It actually causes me to tear up,” she said. “That saved those people’s lives. That’s real. And, I’m proud of that.”

Obama encouraged attendees to keep working together. “When ordinary citizens come together as one family, and one community, and roll up our sleeves and look out for one another, that’s when change happens, that’s when we’re at our best. That’s how we’re going to keep building a country that lives up to its highest ideals.”