You are here: Home / Home / Carousel / MPS defends decision not to notify parents about bomb threat at South Division High School
Share this... 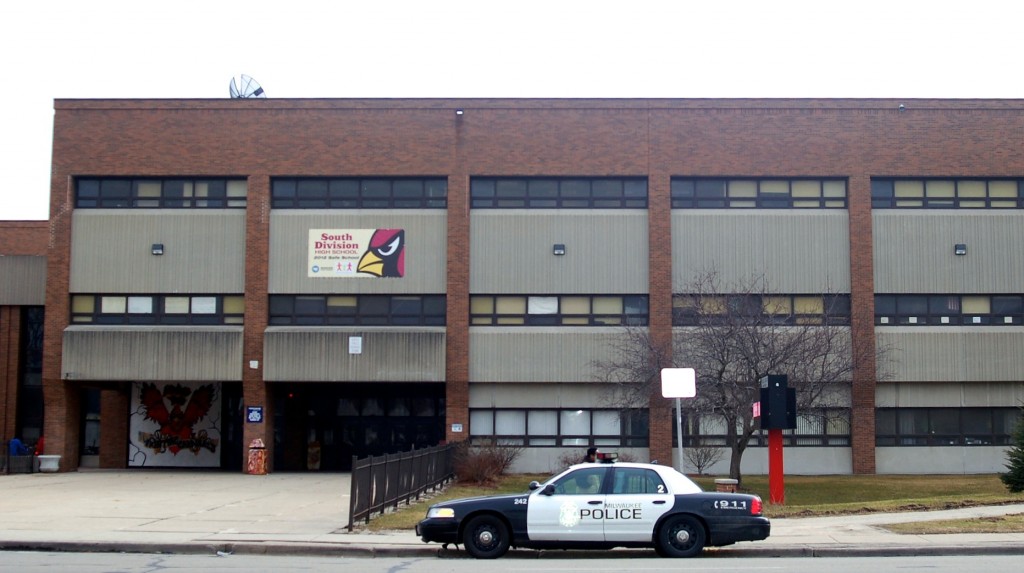 The Milwaukee Police Department confirmed that it responded to a bomb threat at South Division at approximately 2:20 p.m. on March 9. “A check of both the interior and exterior of the school was conducted and nothing suspicious was found. MPD continues to seek the suspect responsible for calling in the threat,” according to MPD spokesman Sgt. Timothy Gauerke.

Gauerke confirmed that the police department investigated two other bomb threats in Milwaukee schools this week. “A caller who sounded to be school-aged phoned a bomb threat to MacDowell Montessori School,” 6415 W. Mt. Vernon Ave., on March 8, at approximately 10:45 a.m. “The school was checked and nothing suspicious was found and the investigation is ongoing,” Gauerke wrote in an email message.

MPD also investigated a handwritten bomb threat found by staff of the private school Early View Academy of Excellence, 7132 W. Good Hope Road, on March 10. “The investigation is ongoing and nothing suspicious was found in the school,” Gauerke added.

NNS could not reach the principal of either MacDowell or Early View.

According to Tony Tagliavia, spokesman for Milwaukee Public Schools, when the district receives an unsubstantiated threat, as it did at South Division, appropriate precautions are taken and authorities are contacted. In this case, ”nothing of concern was located,” Tagliavia stated in an email to the Milwaukee Neighborhood News Service.

Three bomb threats this week at West Allis Central High School, located in a nearby suburb, resulted in a series of evacuations and classes being cancelled on Thursday. A 16-year-old Milwaukee boy has been arrested for two of the three threats, according to news reports. A suspect is still being sought for the third threat made on March 9.

As for why students or parents at South Division weren’t notified of the threat, Tagliavia provided the following statement to NNS: “The safety of our students and staff is our highest priority. That is why we respond appropriately to any such situation. It’s also why we do not discuss specifics of the safety steps we take and it’s why we do not discuss details of unsubstantiated reports, which can help create copycat situations. When the precautionary measures we take significantly alter the course of the school day — which was not the case at South Division yesterday — we do notify families.”

According to Brian Vissers, communications specialist for the West Allis/West Milwaukee School District, the protocol when any type of bomb threat is received, unsubstantiated or not, is to notify parents.

“Each threat is taken on its own merit. It’s not like you can take it as if it’s from a copycat. You have to take every threat seriously in this world,” Vissers said.

“We would always recommend that you communicate with families and that you keep them informed,” said Stacy Tapp, Wisconsin School Public Relations Association (WSPRA) board member and chief of communication and community engagement for Racine Unified Schools.

Parents of West Allis Central students were notified of each threat via a messenger system, which allows alerts to go out instantaneously through a voice call, email or text, according to Vissers.

Parents sitting in their cars waiting for school to let out at South Division on Friday afternoon were surprised and upset after being informed of the bomb threat and the administration’s reaction.

Isaac Fontanez, whose son is a freshman, said any time there’s a threat at the school parents should be notified immediately.

“For sure they should let us know, especially about something as serious as a bomb threat,” said Fontanez in Spanish.

Maritza Acevedo, whose son is a 17-year-old junior at South Division, said it was irresponsible not to notify parents about the threat, whether or not police found anything.

“What are they waiting for, something bad to happen before they notify parents?” said a visibly shaken Acevedo.

Edgar Mendez contributed to this article.