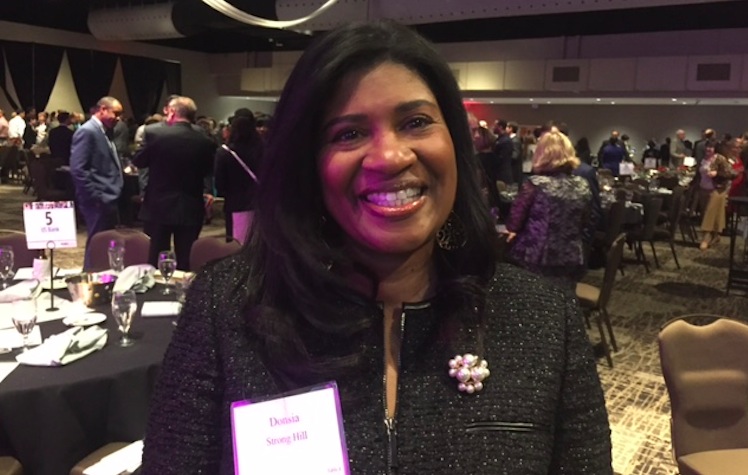 Strong Hill, who has worked as a public finance attorney, said, “My financial work was transactional and I want to go deeper (into community projects). I’ve wanted to do community development for a very long time.”

As an attorney she provided bond and underwriter’s counsel services to tribal governments, municipalities, housing authorities, banks, developers and redevelopment authorities, according to LISC.

In 2014, she and her husband, Richard G. (Rick) Hill founded Hill Group Companies, a business development and consulting firm, in Oneida, Wisconsin. Strong Hill has maintained a law office in Milwaukee for more than a decade. 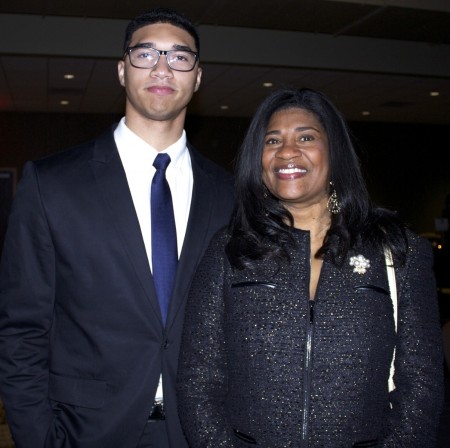 Strong Hill attended the MANDI dinner with her son, Sage Hill. (Photo by Emmy A. Yates)

Daniel Sweeney, a member of the LISC advisory board who served on the executive director selection committee, said that hiring Strong Hill is “a big win” for LISC Milwaukee. Sweeney is a vice president and community development officer at Wells Fargo Bank.

“She has so many positives. She has fresh ideas, new connections through fund development, community development expertise and lending experience. And she was able to step into the position right away,” Sweeney said. “It’s a dream scenario.”

Strong Hill, who grew up on the South Side of Chicago, served as secretary of the Wisconsin Department of Regulation and Licensing under Gov. Jim Doyle in 2003-04 and as the Brown County district attorney from 1998 to 2002. Earlier in the 1990s, she spent nearly two years as a policy analyst in the Clinton White House, and then was a senior advisor in the U.S. Department of Energy.

For the last decade, Strong Hill has worked with indigenous American Indian tribes on governance and program development. She has represented tribes and financial institutions in developing infrastructure and other economic development projects to create long-term sustainable income streams, LISC said.

A graduate of John Marshall Law School, she earned a master’s degree in public administration from Harvard’s John F. Kennedy School of Government.

Strong Hill thinks of herself as a strategic thinker and a hard worker. “We all love to complain (about what needs to be done). You can sit on the sidelines or you can use the skills you have to lead.”

LISC announced Strong Hill’s appointment at MANDI 2016 at the Potawatomi Hotel & Casino this week. It also announced that the national LISC organization will invest $25 million in Milwaukee in the next five years.