You are here: Home / Home / Carousel / Popular South Side supermarket to open new store in Bronzeville
Share this... 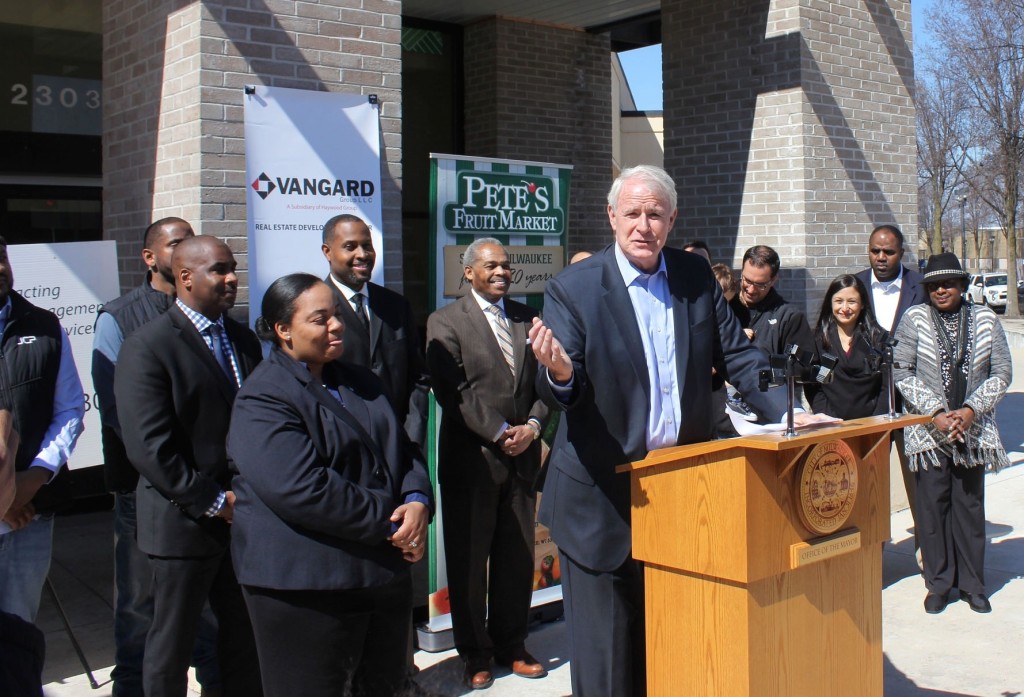 Redevelopment of a distressed Milwaukee neighborhood will get a boost when Pete’s Fruit Market, a South Side institution, opens a new store on the corner of West North Avenue and North Dr. Martin Luther King Jr. Drive.

The corner building, long vacant after a Walgreens drug store relocated about a mile to the north, was the center of controversy in 2013 when a Dollar Tree store tried to move in. Community opposition to the Dollar Tree was led by Ald. Milele Coggs, who joined with the Milwaukee NAACP to demand that the neighborhood get a full-service grocery to improve the health of the community Coggs represents District 6, where the old Walgreens store is located.

The corner lot is at the crossroads of the Brewer’s Hill, Halyard Park and Harambee neighborhoods. It anchors the east end of the Bronzeville Cultural and Entertainment District, a development zone where the city has been working for more than a decade to bring commerce and nightlife into an economically distressed area. 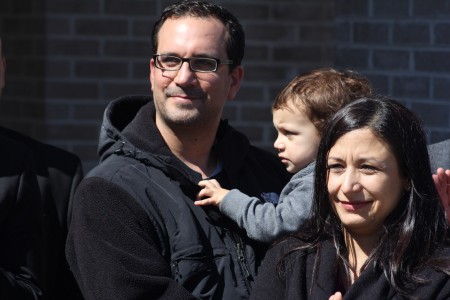 Theodore Tsitiridis, son of the fruit market’s founder, his wife Anne Marie and their son Peter look on as city officials announce that their popular market is branching out to the North Side. (Photo by Mark Doremus)

According to Mayor Tom Barrett, who announced the new grocery store at a brief outdoor ceremony, Pete’s will bring healthy foods, employment and a spirit of community engagement to the Bronzeville neighborhood.

“If you’ve been to the South Side,” Barrett said, “you know Pete’s Fruit Market. It’s a family-owned business with a well-earned reputation for great quality food and great prices.”

The Walgreens site was owned previously by Anup “Andy” Khullar, who had promised to bring a grocery to the corner in exchange for financial support from the Milwaukee Economic Development Corporation. Khullar received a $325,000 loan to support the project but later decided to lease the space to Dollar Tree instead of developing a locally owned and operated grocery store. Dollar Tree got as far as furnishing the store interior and putting up signs outside before it gave up on the Bronzeville location in the face of intense community opposition.

“The stakeholders in the community spoke up and together we fought to get what we originally wanted here and what this neighborhood was promised,” Coggs told the small crowd that attended the store unveiling.

“We are so proud to announce that with Pete’s Market coming to Bronzeville, the neighborhood will get the market it deserves.”

The new Pete’s Fruit Market will take over most of the building space that Walgreens occupied, according to Department of City Development Commissioner Rocky Marcoux. The market is expected to open by the end of 2016, after renovations to both the interior and exterior of the building.

The project will be developed by Vangard Group. Construction work on the building will be handled by JCP Construction, a minority-owned business enterprise.

The founder of Pete’s Fruit Market, Pete Tsitiridis, emigrated from Greece in 1963 and opened his first store in Waukegan, Illinois, in 1976. He sold that store and started over at the corner of South Union Street and West Greenfield Avenue in Milwaukee in 1992.