You are here: Home / Home / Carousel / Well-known homeless outreach effort moves from under bridge into church
Share this... 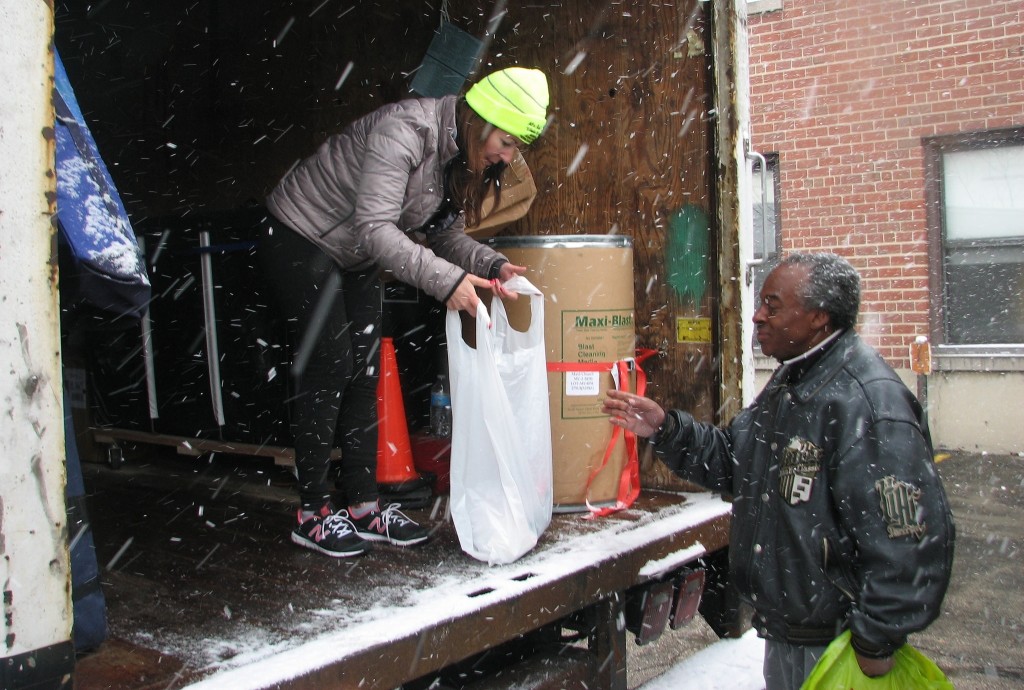 A Mr. Bob’s Under the Bridge volunteer stands in the organization’s trucks and hands items to a man in need. (Photo by Brendan O’Brien)

During a recent gloomy Saturday morning, volunteers unloaded boxes of clothes from a trailer in the parking lot of Redeemer Lutheran Church as a heavy snow began to fall and a wind began to whip.

Inside the church’s basement and out of the cold, a group of homeless men and women huddled around a few tables, drank hot coffee and mingled as others searched through organized piles of pants, shirts, shoes and coats in another room.

The friendly, warm atmosphere, along with the clothes and coffee were provided by Mr. Bob’s Under the Bridge, an outreach organization that hands out donated clothes and hygiene items to people in Milwaukee who are homeless.

The organization’s weekly effort to serve the poor had taken place each Saturday morning in Zeidler Park in downtown Milwaukee, where it was, at times, chilly and damp. But a month ago the organization made a significant change in the way it operates, moving it into the basement of the church. This allows the group to better serve the approximately 125 people who rely on Mr. Bob’s Under the Bridge each week for their clothes and other essential items. 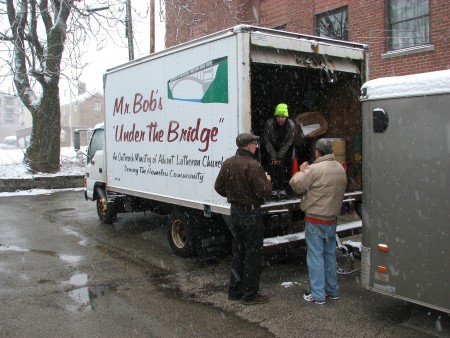 Mr. Bob’s Under the Bridge volunteers unload a truck in the parking lot of Redeemer Lutheran Church. (Photo by Brendan O’Brien)

“The comfort level here is that they are not rushed. They are able to come in here and relax a bit,” said Bob Burmeister, who founded the organization in 2007 with his wife, as he greeted people at the door with hugs and handshakes. “If it was cold out like today, they would have came and got their stuff and hit the road.”

In addition to being in a more comfortable setting, the church basement allows volunteers to spend more time with homeless and poor individuals to better understand their needs.

“I can now sit down at one of these tables when it’s 10 below zero and get to know how they are doing,” Burmeister said.

Mr. Bob’s Under the Bridge relies on donated clothes and toiletries that stream in from schools, churches, civic organizations and individuals around the metro area. Volunteers said they can solicit more effectively if they know the needs of the city’s homeless population. For instance, if volunteers begin hearing of a need for socks, the organization calls on its wide network to hold sock drives.

After the weekly gathering at the church, Burmeister and his band of volunteers drive around Milwaukee, giving clothes and toiletries to homeless people they find living underneath bridges, viaducts and in parks.

“Now we don’t have to stand in the mud and deal with the cold weather,” said a homeless woman who declined to give her name as she chatted with others at the church.

A homeless man named Vic chirped in, saying the move “is wonderful. They do such a wonderful job for us.”

The new setting also creates companionship among the individuals who are served by Mr. Bob’s Under the Bridge, Burmeister said.

“We are creating fellowship,” he said.

Burmeister got the word out about the change by handing out and posting fliers around the city. The organization also relied on spreading the news of the change through word of mouth, resulting in a “phenomenal response,” Burmeister said.

The space was attractive to Mr. Bob’s because it is free and alleviates many of the space and logistical issues the organization faced as it attempted to serve more people, Burmeister said. “This was the best decision for the people who we serve.”

Another advantage to being in the church, located at 631 N. 19th St., is the relationship Mr. Bob’s Under the Bridge has built with Just One More Ministry. The local organization uses the church to store food that it collects from grocery stores, restaurants and caterers and repackages it for food ministries and other hunger relief organizations. Organizers of the two nonprofits have been able to coordinate their efforts to serve the needy, Burmeister said.

“Until some systematic factors, particularly in Milwaukee, in profound poverty are addressed, we cannot let people go hungry and unclothed and live without the basic necessities of life,” said the church’s pastor, Lisa Bates-Froiland.