You are here: Home / Home / Carousel / Hero wanted: Milwaukee man seeks kidney donor to save his life
Share this... 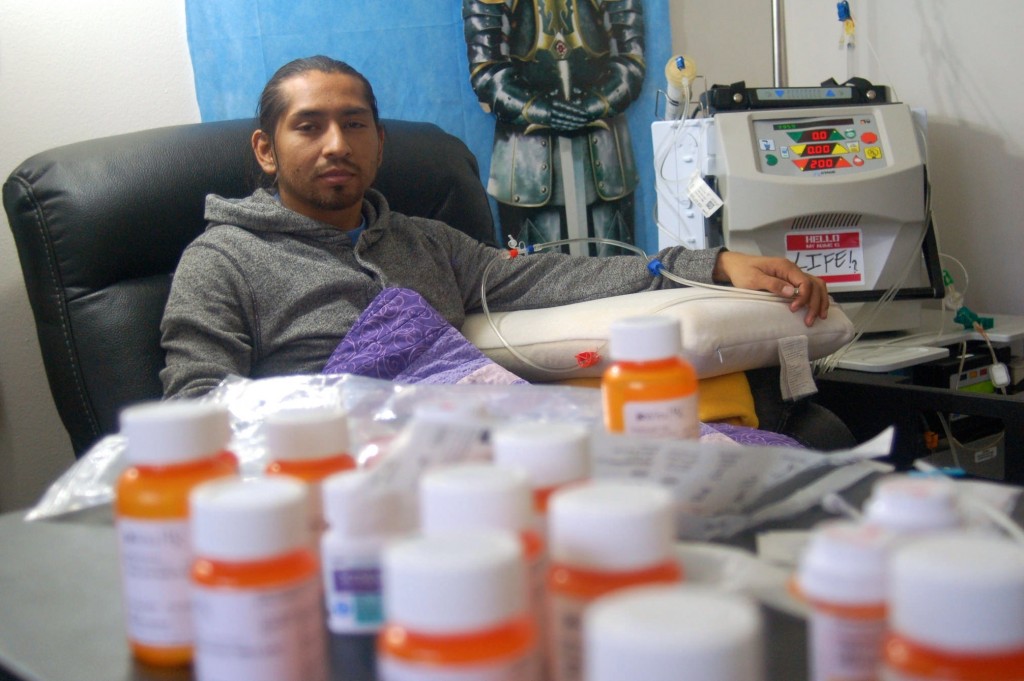 Jonathon Morales, 30, who works full time as a paraprofessional at Lincoln Avenue School and will cross the stage as the first college graduate in his immediate family next month — is in need of a hero.

Saving his life right now is a machine — a dialyzer — that filters toxins and excess fluid from his blood through two needles, one connected to an artery and the other to a vein, cleaning and returning it during a two-hour process called hemodialysis. Morales undergoes hemodialysis five times a week.

It’s been seven years since a minor heart attack revealed that Morales’ kidneys were in the process of shutting down, and three years since their function level dropped to the 10-15 percent range and he started dialysis treatments to stay alive.

Eventually, though, Morales said, “the treatments will take a toll on my body, especially my heart, and I will die.”

Remarkably, Morales, who ran 1,600-meter and cross-country races for his track team at St. Thomas More High School, and was an avid soccer player before he became ill, shows no sign of bitterness.

“I use the treatment time to read my books or work on papers,” said Morales, sitting on a soft black recliner while the dialyzer chirps and beeps. 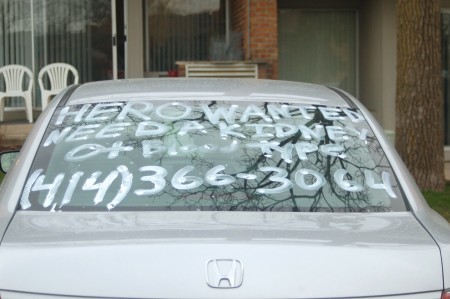 Last week Morales wrote this message on his rear car window in hopes of finding a kidney donor. (Photo by Edgar Mendez)

He never gets angry or flustered, said Michael Biba, who teaches the fifth-grade students Morales counsels and tutors and with whom he shares his love of art.

“He’s an inspiration,” Biba said. “The kids treasure him.”

Morales also worked with youth as a crisis counselor for Integrity Family Services and for years as a summer camp counselor for Nativity Jesuit Middle School, which he attended.

He’s currently one of more than 2,000 people in Wisconsin on the wait list for an organ transplant, most of whom also need a kidney, according to the website Donate Life Wisconsin. And though there are more than 3 million people currently on the Wisconsin Donor Registry, their organs are donated upon death. The wait for a deceased donor is usually 5 to 10 years and kidneys from living donors function better and have fewer complications, according to the Living Kidney Donors Network website.

Morales knows his best chance to survive is to find a living donor. If he does, the team of surgeons at the Kovlar Organ Transplantation Center at Northwestern Hospital in Chicago has agreed to perform the surgery. Morales became eligible earlier this year to have the transplant surgery performed at Kovlar, one of the leading kidney transplantation centers in the nation, after taking a series of tests.

In a recent attempt to find a donor, Morales and his girlfriend, Andrea Burbey, 26, got the idea online to paint a message across the back window of his car and they asked friends and family to do the same. It read: HERO WANTED! IN NEED OF KIDNEY O+. The message was shared widely on Facebook and garnered him a broadcast news segment, which also highlighted April as National Donate Life Month. But, so far, no possible donor has come forward, Burbey said.

“It definitely can be frustrating when you’re trying to save someone’s life and its not working out,” she said, her voice breaking.

Burbey also created Kidney Transplant for Jonathon, a Go Fund Me page, which has raised $10,000 for his medical expenses, and the Facebook page, Find a Kidney for Jonathon, in hopes of finding a donor.

Milwaukee auto body shop owner Jorge Estrada has also been helping to raise funds and awareness about Morales’ plight, describing him as a lifelong friend.

“It’s the least I can do for a guy who would give away his last dollar to me or anyone else who needed it,” Estrada said.

Morales finds it challenging to advocate for himself and said he greatly appreciates all the help he’s had in sharing his story.

He does want people to know that he still considers himself a very useful person in society who has a lot left to accomplish.

“I want to have a healthier life so that I can give back to my community and help my friends and loved ones too,” Morales said. “I’m hoping for someone to give a part of themselves to save my life or maybe even somebody else’s by becoming a living donor.”

You can contact Jonathon directly through his Facebook page and learn more about becoming a living donor here.