You are here: Home / Neighborhoods / North / Amani / ‘Portal’ to connect residents, provide opportunities in 53206
Share this... 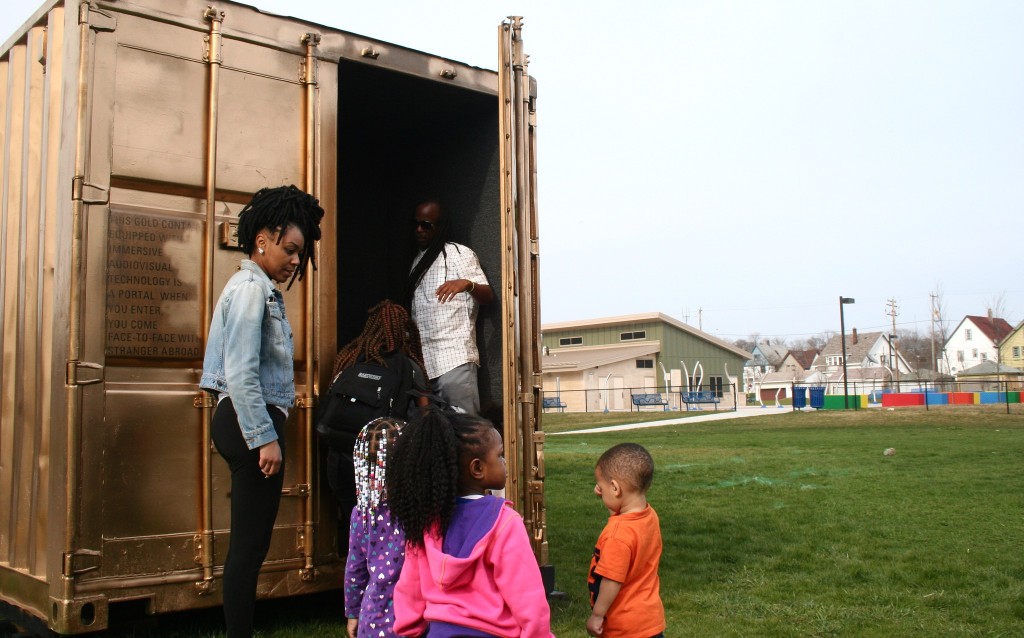 In December 2014, Shared_Studios, a design and technology organization, opened two portals — gold-colored luggage shipping containers outfitted with audio-visual technology — that allowed strangers in different cities to speak face to face. One of the portals was in New York City’s Lu Magnus gallery, the other in Tehran, Iran.

The goal was to “take a hardened stereotype and … just break it a little bit,” according to Amar Bakshi, creator of Shared_Studios.

“There are these meta-narratives about these countries, these media narratives, that can be very, very narrow, very stereotyped,” he said.

Bakshi said the first few days were relatively quiet, but word quickly spread and all of the portal’s available spots were booked up for the next seven months. “It kind of took on a life of its own. I think people responded a lot more emotionally than we had anticipated,” Bakshi said. “We knew we were on to something.”

Today, Shared_Studios has portals in 24 cities worldwide, including Mexico City; Nairobi, Kenya; Havana, Cuba; and a handful of cities in the United States. Recently, a group of community leaders gathered at the COA Goldin Center, 2320 W. Burleigh St., to celebrate the opening of a portal in Amani, one of Milwaukee’s most challenged neighborhoods.

“I just saw all of these bridges being built through this particular initiative,” said Dennis Walton of the Milwaukee Fatherhood Initiative. Walton was contacted by a group working on a film about 53206, the ZIP code that encompasses Amani, and got in touch with COA Executive Director Tom Schneider, who helped provide space.

“I thought this would be a great way to just introduce something new, something that was creative,” said Walton, adding that the portal will allow the community to establish “a stronger national and international presence.”

The Milwaukee portal will initially focus on the issue of criminal justice, between participants in Amani and Newark, New Jersey. Initial funding for the portal came from the MacArthur Foundation, Yale Law School and the Rutgers School of Criminal Justice. Researchers from both schools will anonymously record, transcribe and analyze more than 200 expected conversations, through mid-June. 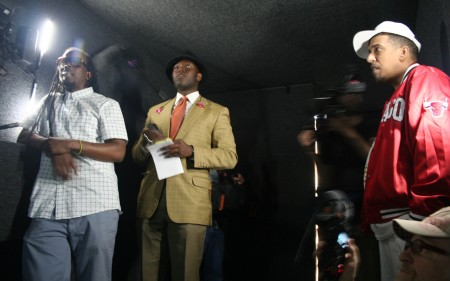 Participants will be required to sign a release, but the conversations won’t be scripted, according to Brandon Culpepper, founder and president of Pepp Nation, an organization that runs youth sports camps and is helping to facilitate dialogues. “We don’t want these to be crafted conversations. We want them to be very loose … very real.”

Culpepper, who grew up in 53206, noted the area’s high rate of black male incarceration, which is among the worst nationwide. He views this as an opportunity for individuals from Milwaukee and Newark, which are facing some of the same issues, to learn from each other.

Christopher LaPoint, 48, who was incarcerated as a teenager, will be taking part in the conversations. LaPoint grew up in three different housing projects in Milwaukee, and said he was bitter as a young man because he didn’t have nice shoes and clothes.

But LaPoint, who took three years of college, said he realized eventually that it didn’t matter how many things he had. He said it’s important to stop blaming other people, and simply enjoy the journey. He hopes to pass some of that knowledge on. But LaPoint said it’s also important to listen, and learn.

Walton added, “You have some of the most creative people you could ever imagine in this environment — they just haven’t been given the opportunity to express themselves. And that’s what we’re hoping this type of initiative will do.”

The criminal justice conversations will take place Monday, Wednesday and Friday from 11 a.m. to 3 p.m., and are restricted to individuals age 18 or older. Those interested in participating can RSVP online for a 20-minute slot.

The portal is a symbol of some of the success achieved in the neighborhood, particularly the recently finished renovation of Moody Park, according to Walton, who is part of the Amani United Neighborhood Association. He hopes it will be a catalyst for the group’s ongoing revitalization efforts.

“It’s a conversation piece; it’s got people wondering; it’s tapping into people’s curiosity,” said Walton of the portal, adding that it will be a way to expose young people to other communities.

“Exposure is everything,” Culpepper said. “I mean, think [about] it. If your parents are on welfare and your dad’s locked up … that’s pretty much all you know.”

Walton also said the portal, which will be staffed and operated by Amani community members, is a great way to continue bringing people to the park and providing activities throughout the summer. Conversations with other portals, including those in Afghanistan and Rwanda, will take place on Tuesdays and Thursdays, with arts activities and other programming on Saturdays.

“We have residents who are leading the way on what they want to see. We’re kind of ending that old paradigm of, you know, from the outside-in,” said Walton. “We’re working from the inside-out.”

County Executive Chris Abele, who also attended the launch event, talked about how focusing resources in the area — creating a new health clinic, re-opening the park and the facilities and programs available through COA — has resulted in a positive, tangible changes, including a reduction in violence around the park.

“What you see … is a reflection of what the community wanted. And, it’s much better than what we ever would’ve gotten if we just, sort of, air-dropped in a plan,” said Abele. “Too often, that step — aggressive, real, robust public input — gets skipped.”

Abele noted that “the politics of increasing investment in neighborhoods that are seen as downtrodden or threatened [is] tricky,” but it’s important to continue to invest in schools, parks, transportation, jobs, housing and public safety in Amani, and other struggling neighborhoods.

“I want to do everything I can to empower people,” Abele said.

He said that doing so could have the added effect of changing the perspectives of people living outside the central city. Culpepper said that’s important because “everyone has to be on the same page” to make real change. Schneider, and others, hope the portal will be another step toward the goal of bringing people together and giving residents a voice.

Bakshi said Shared_Studios is hoping to secure funding, with the help of Walton and others, to keep the portal operating through the end of the summer, and perhaps permanently.

“You have a lot of resources and people who are coming together, genuinely and authentically, to improve the conditions of their community,” Walton said. “And, little by little, bit by bit, we’re getting it done.”