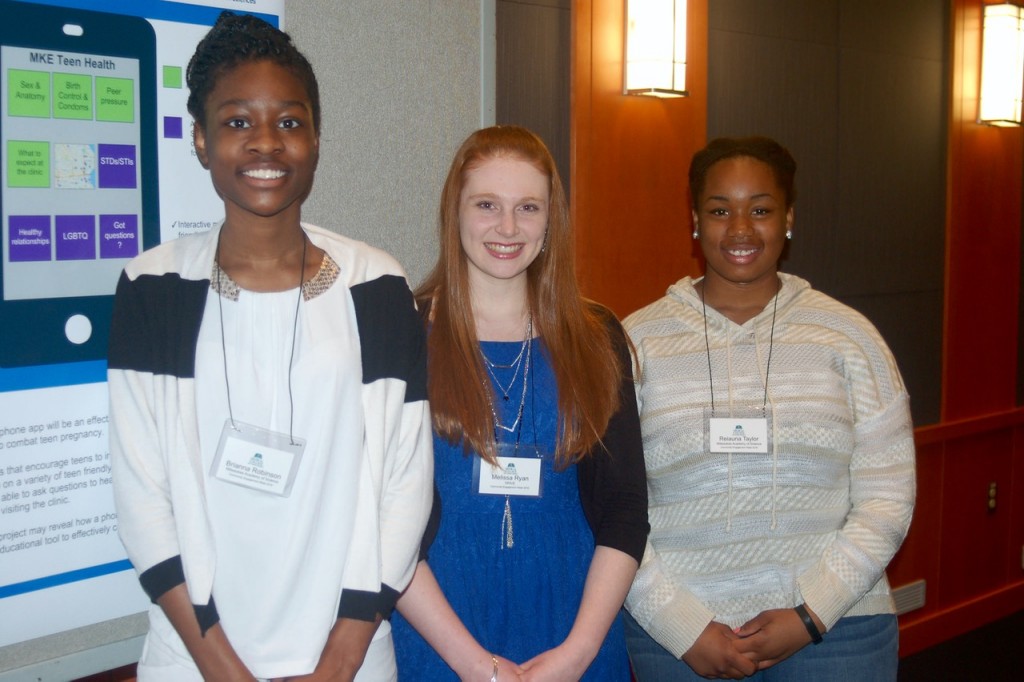 You likely won’t be surprised that local researchers are working to create a phone app that lets users know what items the nearest homeless shelter needs donated, or that another group is investigating the use of technology to combat teen pregnancy. But would you be surprised to learn that the investigators are still in high school?

Those projects are two of several conducted by participants in DRIVE, a Medical College of Wisconsin program that pairs students from two area high schools with a medical or doctoral student who guides them through a research project addressing a public health issue. Other research projects included examining the impact of violence in video games and television, and seeking remedies for excessive use of smart phones by students in the classroom.

Students Reiauna Taylor, Brianna Robinson and Breonna James of the Milwaukee Academy of Science, and Melissa Ryan of the High School of Health Sciences, a charter school in Kettle Morraine, have been working since June to create “MKE Teen Health,” a phone app that will eventually provide information for teens about sex education and health.

According to Robinson, the goal is to eventually help reduce the city’s teen pregnancy rate by providing more accurate information. She said when it comes to topics that are difficult to approach adults about, such as sex education, there is a great deal of misinformation being shared among youth. 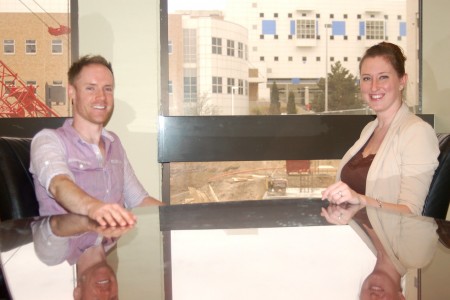 “Many teens get information from their friends who don’t really have accurate information either,” said Robinson.

To ensure that the phone app is distributing accurate information, the teens enlisted the help of coordinators from the Milwaukee Health Department who will vet it beforehand. To make it teen- and user-friendly, Ryan said, the group plans to incorporate pictures and games.

“That way they can learn the information in a way teens find more interesting, which will help them retain it,” Ryan said.

Similar to college or graduate student research projects, the groups of teens received Institutional Review Board approval for their projects. Some, such as Ryan’s group, applied for funding, although they didn’t receive it. Rather than be discouraged, said Ann Williams, the group’s Medical College mentor, the teens said they will apply again next year.

The group has already received 100 free hours for app building from the App Brewery at UW-Milwaukee, and the teens recruited other students from their schools to work on the DRIVE project next school year. Taylor, who said her mother became a parent at 16, is a senior and has received a scholarship to UW-Madison, where she plans to continue the project.

The undertaking is just what creators of DRIVE envisioned when they initiated it two years ago.

“We wanted to foster their (students’) ideas to have them become forward thinkers and problem solvers in the community,” said Tim Sobotka, education manager at Medical College of Wisconsin.

Sobotka and Jess Olson, an instructor and fellow at MCW, developed the program based on an idea from Mara Lord, MCW’s vice president of communications, Gary Grunau of Grucon Group and others. They hoped their students could mentor young researchers while the college could be a catalyst for collaboration among youth from diverse areas of the city.

“They always talk about how Milwaukee is so segregated, but through this program we’re able to bring together students from very different communities and create an open cultural learning experience,” Olson said.

Friendships among teens from both schools came naturally, explained Sobotka.

“They may have different cultures but students from both schools identified similar interests and issues they wanted to tackle,” he said.

The students were paired based on those interests, some of which proved too complex to tackle. Riley Burg and Ayla Gagne of the High School of Health Sciences, and Deron Jackson and Zoe Hall of Milwaukee Academy of Science originally sought to tackle homelessness, post-traumatic stress and poverty. Their mentors helped them focus on more attainable projects.

“Instead of being discouraged that we couldn’t conduct the research we’d originally planned we learned that science is very customizable and that we could still work on a project that could help a lot of people,” Burg said.

They ended up creating the model for the phone app that, once completed, will help students assist homeless shelters by donating specific items, and inform the users about job and volunteer opportunities at the shelters.

Gagne, a junior, said participating in DRIVE has piqued her interest in the medical field and medical research, in particular.

“I think that would be the best way for me to help populations such as the homeless,” said Gagne. Her group presented their research findings during a symposium hosted at MCW, 8701 Watertown Plank Road.

Williams, who is studying for her doctorate in physiology at MCW, said she’s honored to help empower high school students to solve problems within their own community.

“They’re learning now what they can accomplish through research, and really believe in the goals they are setting,” Williams said.

She said the enthusiasm she has seen while working with the students has reinvigorated her own love of research.

“I had kind of lost that spark for science but these kids have inspired me,” she said.