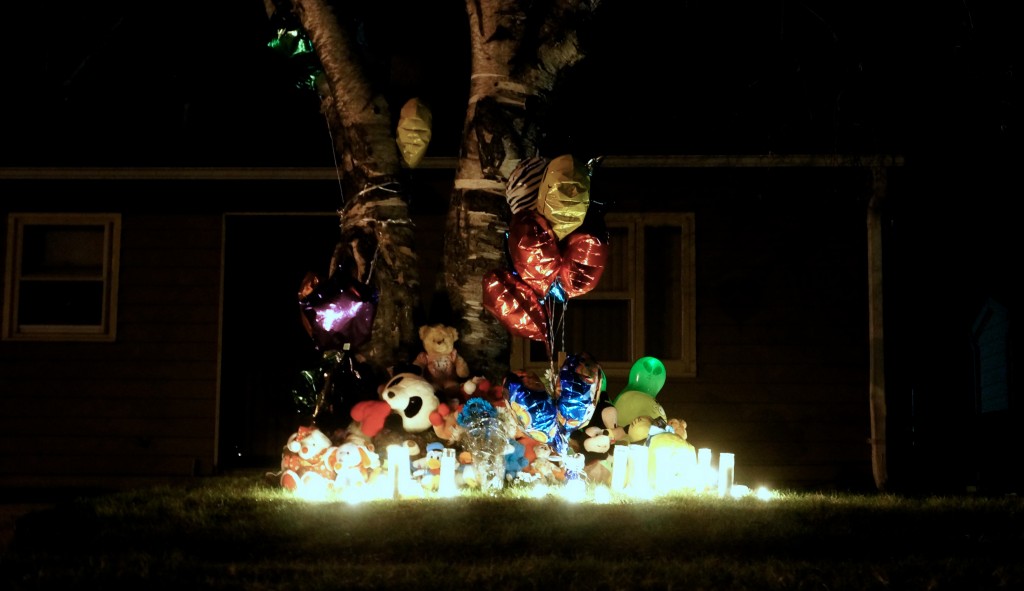 This memorial was placed at the scene of a 2015 fatal accident followed by a double shooting in the 4600 block of N. 48th Street. Three people died. (Photo by Adam Carr)

The spike in violent crime that occurred in Milwaukee last year should be the number one issue for anyone concerned about the life of city residents, said Patrick Sharkey, a New York University sociology professor who studies racial inequality and violence in urban neighborhoods. Homicides in Milwaukee jumped from 94 in 2014 to 153 in 2015, according to the Milwaukee Journal Sentinel Homicide Tracker.

That spike followed 20 years of mostly declining crime rates here and around the U.S. after aggressive anti-crime policies were initiated in the early 1990s, Sharkey noted.

“We’re here to have a conversation about neighborhoods, poverty and segregation,” said Susan Lloyd, executive director of the Zilber Family Foundation, one of three local foundations that, together with LISC Milwaukee, formed the Community Development Alliance, a neighborhood development nonprofit.

No one knows the causes of Milwaukee’s recent spike in violence, said Sharkey, who is also scientific director of Crime Lab New York, which uses scientific insights to develop innovative approaches to reducing violence. But the problem was on the minds of everyone he spoke with during his two-day visit, which included a tour of Milwaukee’s neighborhoods, he said.

“The challenge is to figure out (why this is happening) and focus resources to make sure … the level of violence continues to fall,” said Sharkey.

His 2013 book, “Stuck in Place: Urban Neighborhoods and the End of Progress toward Racial Equality” describes how political decisions and social policies have led to severe disinvestment in black neighborhoods, persistent segregation, declining economic opportunities and a growing number of African-Americans in the criminal justice system.

At the symposium, Sharkey acknowledged that the 20-year drop in crime was related to a model of policing that gave law enforcement officers free rein to do whatever they thought was needed to fight crime. But the resulting mass incarceration of black men, as well as police violence directed at them, have led to calls for change.

“New models start with the understanding that neighborhood violence is usually limited to certain small groups,” Sharkey said. “Police should focus tools on trouble spots when needed, but spend (their remaining) time building trust and relationships in the rest of the community.”

“We realized we had to get out into the community and build relationships … to solve problems,” Chisholm said. He added that the county is seeking long-term solutions by working with partners such as Sojourner Family Peace Center and an array of providers of medical, psychological and other “wraparound” services.

Chisholm said his office desperately needs the help of nonprofits and residents. “There is a lot of historical injury in this community that has to be healed. That will not be done by the criminal justice system alone,” he said.

“Working together is part of the solution,” agreed panelist Victor Barnett, founding director of Running Rebels, a nonprofit youth agency. And jobs and scholarships for college are a big part of the answer, he said.

“People in our communities need to feel that there is hope,” he added. “They have to see businesses like the new, locally owned Juice Kitchen,” in Lindsay Heights.

“Peaceful behavior and beliefs require investment in places and practices that lead to opportunity,” she explained. Lamenting the fact that intergenerational deprivation and lack of opportunity have caused “a kind of dysfunction” to be passed on to another generation, Adams said institutions such as Walnut Way can provide residents with alternatives to violence.

Panelist Linda Bowen, executive director of the Institute for Community Peace in Washington, D.C., said there needs to be long-term funding for anti-violence efforts.

“When you’re starting to solve some of these problems, there often isn’t money to go forward. We have to think in terms of 30-year investments, in generational terms.”

Sharkey also referred repeatedly to the importance of long-term policies to address poverty and violence.

Sharkey observed that the disconnect between the central city and the surrounding suburbs is stifling economic development. “The problems of Milwaukee are not going to be solved solely within Milwaukee,” he added. “There has to be a regional metropolitan approach.”

Despite Milwaukee’s recent homicide spike, Sharkey said the long-term drop in violence should be acknowledged and celebrated in a more explicit way.

Likewise, the public discourse hasn’t changed in relation to falling teen birth and high school dropout rates, he said. “We should celebrate that progress while still maintaining focus on the problems that we do have.”