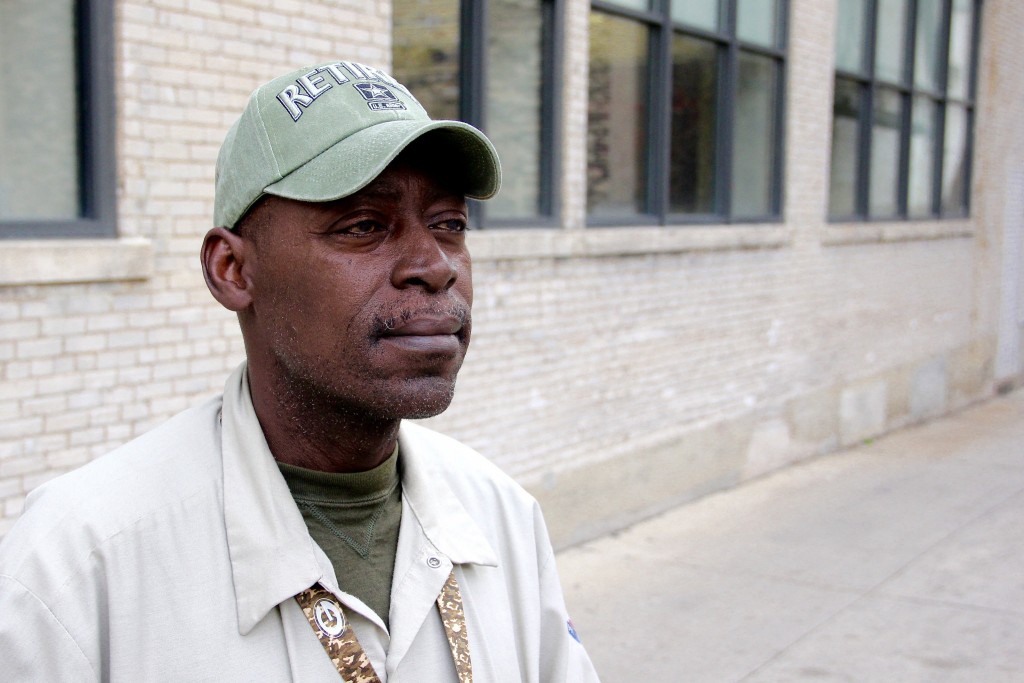 Roberson Merriweather faces high energy bills because of a boiler in need of repair and a dilapidated roof. (Photo by Wyatt Massey)

Roberson Merriweather, 50, carries his application through the cubicles at Community Advocates, 728 N. James Lovell St., before taking a seat beside the desk of Shirley McClendon, a community advocate. Merriweather’s faded green hat reads “Retired” above a U.S. Army logo. Around his neck hangs a card displaying his Bronze Star and Afghanistan Campaign Medal.

The 30-year Army veteran is at Community Advocates for the second day in a row, this time with the necessary paperwork to apply for weatherization assistance and the county’s Energy Assistance program.

“I’m just trying to stay afloat, get ahead on things,” he said. “I’ve got debts to pay, but I’m working now, trying to get back on my feet” after more than a year of unemployment.

Like many other African-American households in Milwaukee, Merriweather has struggled to pay his energy bills; at one point his heat was turned off. His home’s boiler, which is more than 10 years old, often leaks. A recent report by the American Council for an Energy-Efficient Economy and Energy Efficiency for All found that the city has the sixth highest energy burden in the country for the average African-American household. Milwaukee is also in the top five cities with the greatest difference between city and state energy burdens.

According to the report, which measured 48 cities, African-American households in Milwaukee pay more than 7 percent of their income for energy costs, compared to 4 percent paid by the average city household. The report measures energy burden as a percentage, dividing the household’s total energy spending by gross household income. The data was taken from the U.S. Census Bureau’s 2011 and 2013 American Housing Survey, including nearly 2,000 homes in Milwaukee. 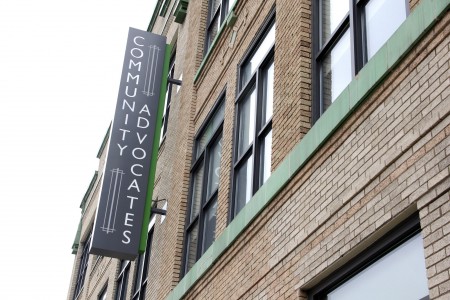 Community Advocates, 728 N. James Lovell St., is one of several city organizations where residents can apply for energy assistance. (Photo by Wyatt Massey)

Maudwella Kirkendoll, Community Advocates chief operating officer, said that the city’s racial segregation adds to the disproportionate energy burden. “The large majority of African-Americans live in neighborhoods where the housing is dilapidated and not weatherized and not energy efficient at all,” he said.

Characteristics of the home, such as poor insulation, inadequate sealing and inefficient appliances, are some of the drivers of a higher energy burden, according to the report. Other factors include unexpected economic changes, inability to pay high upfront costs for energy efficiency measures and a lack of knowledge about support programs.

Merriweather’s application for energy assistance is one of two options residents have to lower their energy bills. About 100,000 We Energies customers apply for assistance each year, said spokesperson Cathy Schulze. The program is available for residents with an income under 60 percent of the state median, which for a household of three is $41,355 a year. The one-time payment program runs between Oct. 1 and May 15.

More than 60,000 residents receive an average credit of between $250 and $550 through the Community Advocates program, which is paid to the energy company, Kirkendoll said. Advocates such as McClendon help residents with the energy assistance application, which includes 23 questions regarding household size, energy usage and monthly income.

These questions may identify other credits residents can apply for. “Usually when a client comes in, we try to cover all the bases,” McClendon said. For Merriweather, that meant applying for the program’s crisis fund to pay for overdue bills. The one-time payment will help him begin to pay off fines and start making payments for a nagging weatherization problem related to his roof.

After serving in Afghanistan between 2006 and 2007 and then working as a trainer at Fort McCoy, Merriweather lost his job and needed to have multiple surgeries. He began receiving letters from the city around the same time stating that his roof violated building codes.

“The fines just kept compounding,” he said. “It just piles up, piles up and piles up.” His heat was shut off for more than a week before Merriweather could borrow money and begin a payment plan with We Energies. “I’m on top of things as much as I can be,” he said.

Weatherization programs are the other option for residents to lower their energy bill. The report notes that raising the energy efficiency of low-income households nationwide to that of the median household would reduce more than a third of the energy burden. The same measures would lower the energy burden by 42 percent and 68 percent for African-American and Latino households, respectively.

“In large part, the issue with the high energy burden is tied to the old housing stock we have in Milwaukee,” Kirkendoll said. “We have a lot of old homes and the heating is going right out the windows.” Merriweather’s home on Burleigh Street was built in 1921. The average build year for a residential property in his 53210 ZIP code is 1926, according to city data.

Residents who qualify for energy assistance can apply for the Social Development Commission weatherization program. The repairs are free and include adding insulation, sealing the home, as well as replacing furnaces and refrigerators that are not energy efficient. La Casa de Esperanza and Partners for Community Development do similar work with the energy assistance program.

SDC weatherizes 500 to 700 homes each year with the help of 30 contractors and a $5 million budget. However, Jim Gambon, SDC residential services manager, said progress is slow.

“We know that our program is not touching — not even close to touching — all the homes that are potentially eligible,” Gambon said. “At this point there are approximately 40,000 applications for energy assistance … it could be closer to 80,000. So that’s a deep pool for weatherization.”

Residents may also apply for a loan up to $15,000 for energy saving measures through the Milwaukee Energy Efficiency program, which partners with Summit Credit Union. Erick Shambarger, director of the city’s Environmental Collaboration Office, said the program is designed for individuals who do not qualify for weatherization assistance but cannot afford the cost of energy efficient improvements. “Essentially that allows them to pay for improvements up to 15 years while saving money on their energy bills,” he said.

Merriweather’s home could be eligible for weatherization from La Casa de Esperanza. An outreach worker from La Casa scheduled a visit to his home to see what work is required, which could be to replace the boiler. “Any assistance with weatherization, I will take it.”