You are here: Home / Community Voices / The bridge that made Milwaukee famous
Share this... 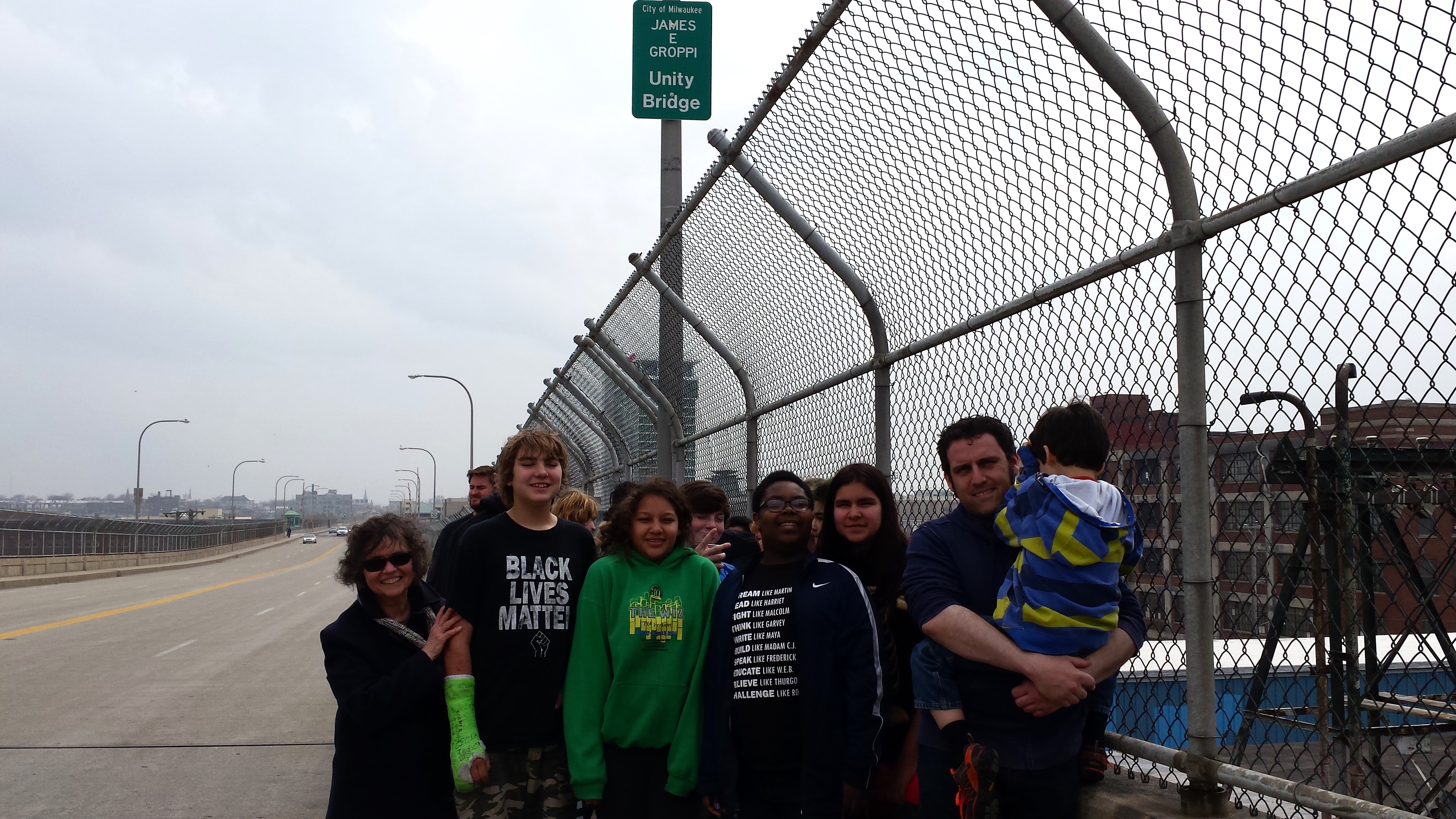 Margaret Rozga, poet, civil rights activist and professor emerita of English at UW-Waukesha, invites Milwaukeeans to participate in planning the 50th anniversary of the open housing marches led by Father James Groppi and the Milwaukee NAACP Youth Council in the 1960s.

“We’d like to walk across the bridge,” Yolanda Hare said. “Would you be able to walk with us?” The bridge in question is the James E. Groppi Unity Bridge, formerly the 16th Street Viaduct, site of the best known of the 200 consecutive nights of marching for open housing in Milwaukee in 1967-68. Yolanda, a staff member at Minneapolis’s Southside Family Charter School, served as coordinator for the middle school’s extended civil rights tour this April.

Of course, I said yes. This walk across the bridge was a way to insure that the movement in Milwaukee for local and national fair housing legislation would not be forgotten, its energy not lost. Milwaukee’s open housing marches can be a source of inspiration for ongoing work for social and racial justice. Commemorating them has been a priority for me since planning the celebration of their 20th anniversary. That was when the idea for renaming the viaduct was born, and the Common Council resolution to rename the bridge succeeded a year later.

The original 1967-68 marches for fair housing were not the first step in the struggle to secure adequate housing here for African-Americans in the post-World War II period. The African- American community in Milwaukee nearly tripled in size from 21,172 persons in 1950 to 62,458 in 1960. But the amount of housing available to African-Americans did not correspondingly grow. By 1967, African Americans were 12 percent of Milwaukee’s population living on 5 percent of the city’s land, with a population density four times greater than elsewhere in the city.

As early as 1962, Vel Phillips, the first African-American and the first woman on Milwaukee’s Common Council, introduced an open housing bill. It was defeated, with her vote the only one in its favor. Each time she re-introduced the bill, the results were the same.

Early in 1967 the Milwaukee NAACP Youth Council offered to support Phillips’ efforts. The Youth Council had first addressed the housing crisis by working on the issue of lax enforcement of the city’s building code. Youth Council members, among them children in the upper grades at St. Boniface School, attended the trials of property owners charged with building code violations on their inner city properties being rented by African-Americans. Even when these landlords were found guilty of failing to keep the properties up to code, their fines were sometimes merely one dollar, only token punishment, with no incentive to change.

The Minneapolis middle school students and their teachers who visited last month wanted to honor Milwaukee’s open housing movement, which included young people their own age. That inspired these students. Their presence here seemed a sure sign that this Milwaukee story was weaving itself into the regional, maybe the national narrative of the civil rights struggle. Four years ago students at NOVA High School in Milwaukee also found inspiration in learning about Milwaukee’s open housing movement, turning their study of the movement into a museum exhibit, the March to Equality project, shown at the Arts @ Large Gallery in 2012. The students also guided multiple civil rights tours of Milwaukee that year and the next.

Recently there was further evidence of the power of Milwaukee’s open housing movement. The Frank Zeidler Center for Public Discussion hosted a brainstorming session to generate ideas for the 50th anniversary of the marches. Response to the open invitation to this brainstorming session had been promising, with 28 people registering. Turnout was even better; about twice the number of people actually attended.

In energetic small group discussions, a wide array of suggestions emerged. Included were ideas focusing on youth, the role of the arts, education about the historic events, re-enactments, commemoration in physical forms such as buildings, statues, plaques and billboards, public conversations about racism, and policy initiatives to address one or more present-day housing issues.

Follow-up meetings to this initial session will aim to specify what the course of action should be on the themes now in rough form. These follow-up meetings, like the initial brainstorming session, are open to all. Times and places of future meetings will be posted on the March On Milwaukee: 50th Anniversary Facebook page.