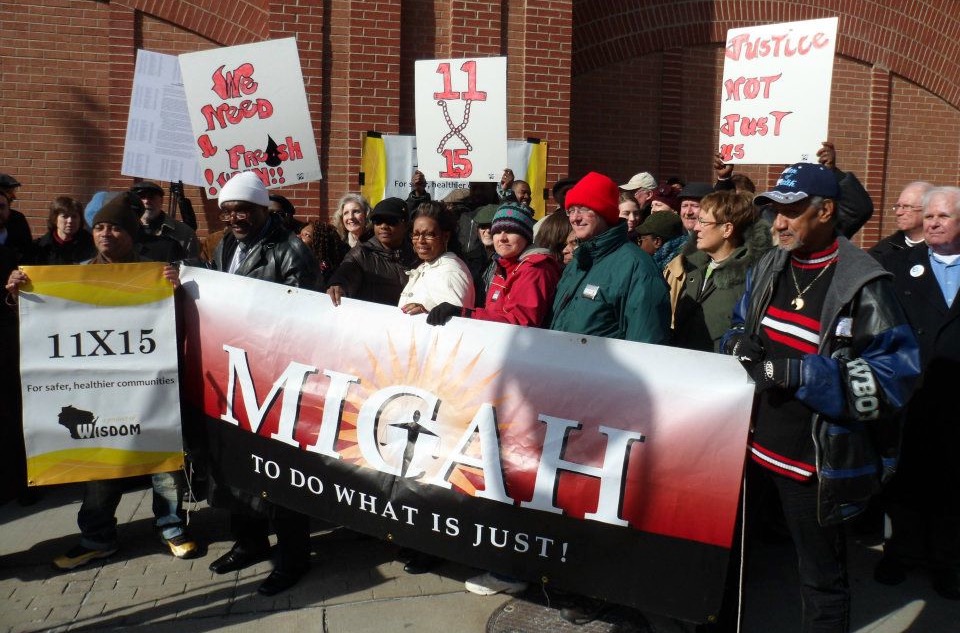 Demonstrators march in front of the Milwaukee Secure Detention Facility, 1015 N. 10th St., during an event to launch WISDOM’s campaign to end mass incarceration in Wisconsin. (Photo by Barbara Pfarr)

Mark Rice, who received the 2016 Distinguished Leadership Award from MICAH (Milwaukee Inner-city Congregations Allied for Hope) for his work to end mass incarceration in Wisconsin, argues that justice system reforms would reduce the scourge of imprisonment devastating Milwaukee neighborhoods.

Wisconsin’s senators have not signed on as co-sponsors of the Sentencing Reform and Corrections Act yet. Sen. Tammy Baldwin supports the bill, but she is waiting for another Republican to sign on before she co-sponsors it. Sen. Ron Johnson has not yet taken a position on this proposal.

The U.S. Congressional Budget Office estimates that this bill would save taxpayers more than $700 million over the next 10 years. The federal government could instead spend this money on strengthening neighborhoods in Milwaukee and throughout the country that have been disproportionately impacted by mass imprisonment.

Federal legislators are making little progress on justice system reform, but they are doing better than policymakers in Wisconsin. In June 2015, Gov. Scott Walker said that the “challenges in terms of people being incarcerated for relatively low offenses is not a significant issue in the state of Wisconsin.” Actually, it is a huge problem.

The first step to solving a problem is admitting you have one. It is time for Clarke, Johnson and Walker to acknowledge that mass incarceration has devastated neighborhoods here in Milwaukee and across the country. Walker must face the fact that crimeless revocation (the practice of re-incarcerating individuals on probation, parole, or extended supervision for minor rule violations) is more than significant. It is a failed policy, a waste of money and an embarrassment to Wisconsin.

Several states have shown that they can decrease levels of incarceration without compromising public safety. Two studies demonstrate that recent policy changes that resulted in the release of nearly 30,000 people from prisons in California did not cause increases in crime. Policy reforms there included greatly reducing the use of incarceration for crimeless revocations and enabling some people with convictions for violent crimes to be eligible for parole. Thirty states cut both rates of imprisonment and crime from 2008 to 2013.

EXPO (EX-Prisoners Organizing), a group of formerly incarcerated people that is working to transform Wisconsin’s unjust punishment system, believes that the people closest to the problems are closest to the solutions. We are leading efforts to challenge elected officials such as Sheriff Clarke and Governor Walker who attempt to justify the unnecessary incarceration of thousands of people.

My own story provides an example of why legislators should enact sentencing reform and revocation policy reform. When I was 19 years old, I faced over 100 years in prison for non-violent offenses, but Wisconsin officials released me after I served 20 months of a 30-month sentence. Fortunately for me, Wisconsin did not have any long mandatory minimum sentences for these offenses at the time.

The Department of Corrections also forced me to spend six months in the Milwaukee Secure Detention Facility for allegedly violating a rule of community supervision that did not involve a new crime — a crimeless revocation. We are talking about imprisoning people for minor infractions like unauthorized computer or cell phone use, crossing county lines, missing appointments, failing alcohol tests and entering bars.

Incarcerating people for technical violations destroys lives, contributes to overcrowding in jails and adds nothing to public safety. It is also fiscally irresponsible.

I completely turned my life around over the last 16 years. During this time period, I earned two master’s degrees and worked for several nonprofit organizations. I am the associate organizer of EXPO, a Ph.D. candidate at the University of Wisconsin-Milwaukee, the chair of WISDOM’s post-release issues workgroup, and a board member of Project RETURN, a nonprofit organization in Milwaukee that helps men and women leaving prison make a positive and permanent return to our community. I could not have accomplished all of this if a judge had been forced to sentence me to a minimum of 20 years in prison.

I am just one of many EXPO leaders who have succeeded after being released from prison. Wisconsin taxpayers regularly pay more than $150 million each year to unnecessarily imprison individuals for crimeless revocations. This money should instead be used to build human potential.

In response to concerns raised by EXPO and WISDOM, a group of state representatives led by Mandela Barnes, David Bowen, Evan Goyke and LaTonya Johnson introduced a bill in 2015 that would have limited the number of people who could be sent back to prison for technical violations. Unfortunately, legislators did not enact this bill.

Lawmakers at the national level and in Wisconsin should not wait any longer to reform sentencing and revocation policies that contribute to mass incarceration.