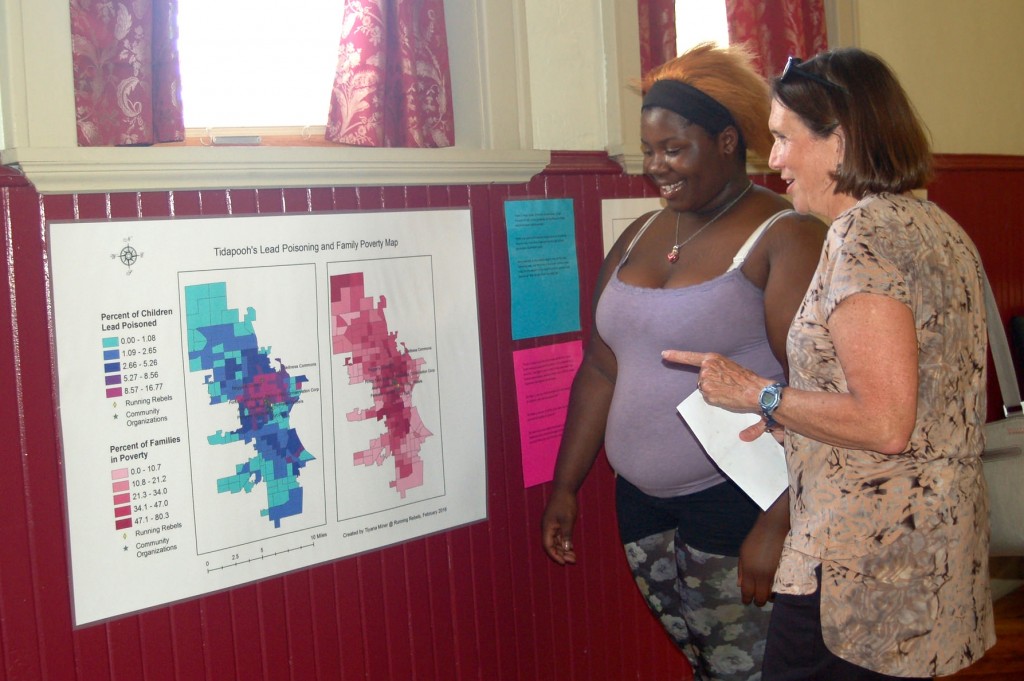 Color-coded maps of Milwaukee created by members of the Running Rebels Youth Advisory Council show that high poverty areas tend to have high rates of lead poisoning, which in turn is correlated with higher rates of crime such as robberies.

The Youth Advisory Council (YAC) is a group of eight teens who spent the past year learning about lead poisoning and analyzing how various factors contribute to criminal behaviors.

The maps and photographs taken by the council members were showcased at the Running Rebels Non-Violence Summer Kick off. The event included lunch, Purple Door ice cream and a basketball game for Running Rebels members.

Running Rebels, 1300A W. Fond Du Lac Ave., works to keep youth from engaging in risky behaviors. Founded in 1980 by Victor Barnett, it provides positive choices for youth “facing the daily pressures of delinquency, drug abuse, truancy and teen pregnancy,” according to its website.

“Running Rebels sends an early message to young people to stop and think about the consequences of their actions,” said Dawn Barnett, Running Rebel co-executive director. 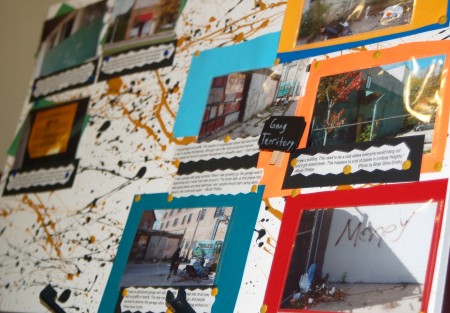 A photo board highlights improvements students think can be made in Lindsay Heights. (Photo by Rebecca Carballo)

The YAC’s mapping project looks at the factors that influence violence.

“This project is to show them how different things besides individual behavior contribute to violence,” said Sandra Bogar, YAC leader and a student at Medical College of Wisconsin. Bogar described lead poisoning as “slow violence,” because those who have been affected are more likely to engage in aggressive behaviors later in life.

YAC used data from the Medical College of Wisconsin and mapped which areas in Milwaukee had the highest concentrations of violence, poverty and lead poisoning. They also documented the Lindsay Heights community’s strengths and weaknesses through a “photo-voice” project using photography and written descriptions.

Bogar said she tried to choose projects that the teens could relate to. “We wanted youth to have leadership opportunities and share things in their own words,” Bogar said.

In their visits to gardens around the city YAC members learned that even after older homes with lead paint are knocked down, lead can still be found in the soil and absorbed in the gardens.

“This experience enlightened me,” said Eric Newson, YAC member and Milwaukee High School of the Arts student. “I related to it because I used to have a garden when I was little.”

Added Tarif Garrett, a YAC members and Milwaukee School of Engineering student, “Once I have a career I want to help fix the homes causing lead poisoning. I had no idea there could be lead in gardens. That was very surprising.”

Half the YAC students grew up in Lindsay Heights. Tiyana Miner, a YAC member and student at South Division High School, said some of what they chose to photograph was unplanned, but they had an idea of what they wanted.

“When we went out we knew what we were looking for; it was just a matter of finding it,” Miner said.

The photos were displayed on three boards in the categories of neighborhood challenges, improvements and strengths.

The final board displays photos of the gardens the teens visited. Miner said the board captures the beauty in her community.

“Even the smallest things can give life,” Miner wrote on the display. “My community has more life than I can see.”

Miner said the photo-voice project and maps demonstrate to the community what she and the other YAC members have learned.

“This is a great way to show people the positive things we’re doing,” Miner said.