Youth leader Tracey Davis told a crowd that filled Incarnation Lutheran Church on a recent rainy evening that the young people in the 53206 Zip code are suffering.

“Help us!” she implored the adults in the room. “We are your future leaders. Ask for our opinions, advice, perspective.”

As she named the problems that plague them, four young men walked down the aisle bearing a casket on their shoulders.

“Goodbye mass incarceration, homelessness, violence. There have been too many tears, too much blood shed …” Davis intoned. 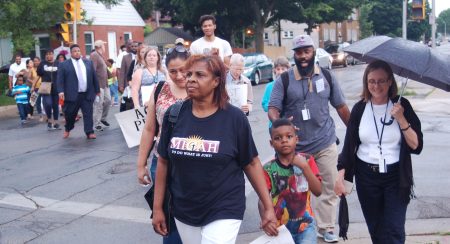 At the altar, a “pallbearer” opened the empty casket and Davis invited youth participants to place inside index cards on which they had written words and phrases such as “poverty,” “stray bullets,” “poor schools,” “drugs.”

The symbolic funeral for issues that oppress young people took place at the end of the recent “I Am 53206” march organized by the young adults who make up Milwaukee Inner City Congregations Allied for Hope’s (MICAH) Holy Ground Youth and Young Adult Organizing Project. About 250 people participated in the event.

Working to address the city’s racial and economic disparities, the group is outlining “a set of concrete policy solutions shaped by young people in the Milwaukee community who are impacted by these inequities,” according to youth leader Elisha Branch, who also spoke at the church.

Citing statistics that illustrate inequality in poverty rates, black male incarceration and black-white achievement gaps, Branch said, “We believe this must end now. … We are committed to shaping a better Milwaukee.”

Branch invited Supreme Moore Omokunde, 10th District county supervisor, and State Rep. David Bowen to the podium to ask them if they would commit to working with the group on its economic development plan. They both said yes. 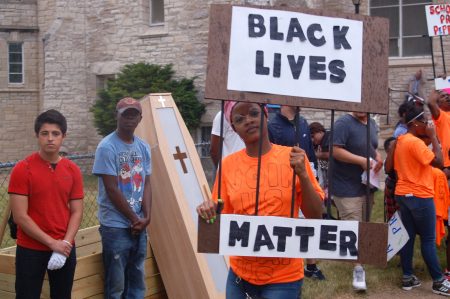 Other issues addressed at the event included inequality in education and the criminal justice system. Marcelia Nicholson, 5th District county supervisor and a 4th grade MPS teacher, and Laresha Love, a MICAH youth leader, spoke about barriers to achievement in the public schools, including supply shortages, traumatized students and low expectations.

Love, a senior at Bradley Tech High School, noted that only the top 10 percent of students there are given information about ACT prep courses and only those with grade point averages of 3.0 and above are eligible to take them. “This must change. If we want the youth of our city to succeed, we must give them the tools,” Love said.

MPS board president Mark Sain and vice president Larry Miller committed “to bring young people to the table to address the need for ACT prep for all students in the class of 2016 and 2017.”

The group of 15- to 34-year-olds from seven churches located in or near the 53206 ZIP code was formed by MICAH in late 2014, according to organizer Dakota Hall.

Hall said that the march was intended to show the community that most of the young people who live in the 53206 ZIP code are not car thieves or otherwise up to no good. “They want people to know that they are working to improve their neighborhoods.”