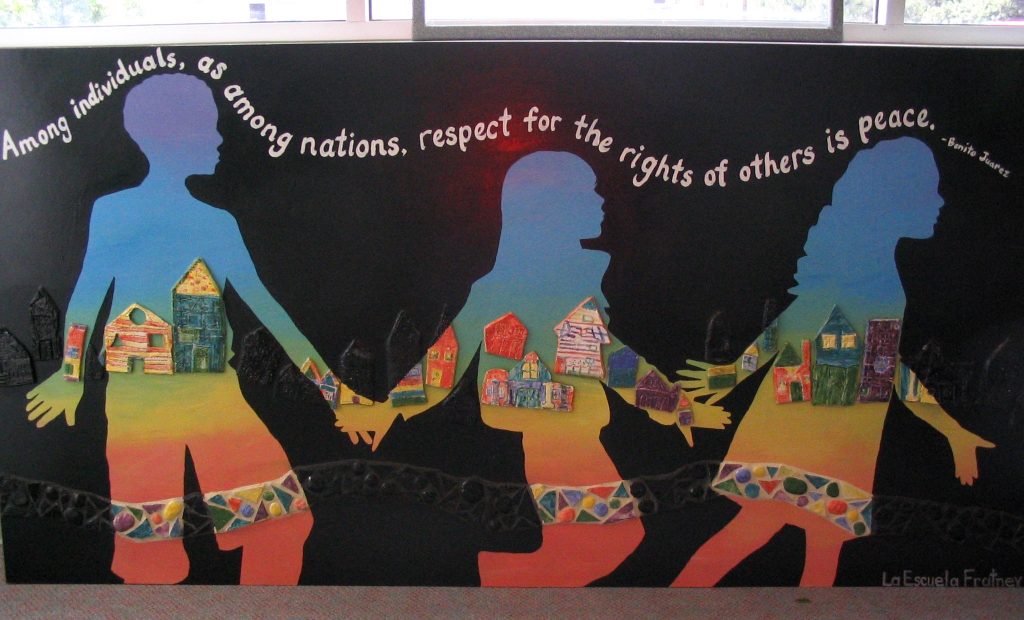 This mural was created by the Friends of the Hank Aaron Trail as the group’s contribution to the 40th anniversary of Milwaukee’s open housing marches, which took place in 1967-68. (Photo courtesy of La Escuela Fratney)

Margaret Rozga, poet, civil rights activist and professor emerita of English at UW-Waukesha, suggests that Milwaukee already has a public art Freedom Trail — it just needs to be acknowledged.

Even if those born here do not pronounce the third letter, it’s easy enough to spell Milwaukee. It’s even easier if we skip the letter natives do not pronounce and use the airline assigned abbreviation for our city’s name: MKE. More difficult is how we define our city. It is frequently defined as one of the most, if not the most, segregated cities in the U.S.

Where do we go from here? How can we define a new vision for ourselves? That will take concerted effort on many fronts: economic development, educational investment, and robust and widespread political participation and leadership. Also important is the role of public art. The sunburst sculpture at the lakefront end of Wisconsin Avenue and the winning sunrise image in a People’s Initiative for a new city flag both suggest a city on the rise.

Milwaukee also has impressive public art with social and racial justice themes. The Joshua Glover mural sculpture built into the freeway base at the Fond du Lac / Juneau Avenues on/off ramps shows Milwaukee standing up for justice as early as the mid-nineteenth century. Glover escaped from slavery and, under the terms of the 1850 Fugitive Slave Law, was being held in the Milwaukee jail until he could be returned to the slaveholder who claimed rights over him. Milwaukee would have none of it. Citizens stormed the jail and released Glover so that he could continue on to freedom.

More recent history is represented in the statue of the Rev. Martin Luther King, Jr. on King Drive near Walnut Street. On King Drive at Ring Street are the murals of the Milwaukee NAACP Youth Council Commandoes, representing the struggle for local and national fair housing legislation. Cesar Chavez, co-founder and leader of the United Farm Workers, is honored as a figure of justice and equality with a bronze statue at the El Rey Grocery on Cesar Chavez Drive. An inclusive gallery of national and local social justice heroes is portrayed in the mural at First and Mitchell Streets.

This array of public art and place-making suggests Milwaukee has a tradition of standing up for justice. It also suggests that Milwaukee already has a public art Freedom Trail.

Acknowledging this citywide trail is a way to affirm the basic idea that the whole is more than the sum of its parts. An inaugural event could complement the Clarke Square Neighborhood Initiative’s Ciclovía, where people enjoy biking and other activities on streets closed to motor vehicles. It could be scheduled during next year’s 50th anniversary of Milwaukee’s open housing marches. The Freedom Trail could then continue to be a cross-town bicycle route. It would link multiple city neighborhoods and could be a point of civic pride, featured in a well-designed brochure for tourists and residents alike.

The Milwaukee youth I’ve worked with on poetry, history and visual art projects start out generally unaware of Milwaukee’s social justice history. At first I wondered what, if anything, this history would mean to them. I learned that once students know about hometown social justice heroes, they begin to see possibilities for their own civic engagement.

Their issues and tactics may be different than those of their elders, but the students come to realize that they need not be passive in response to racial and social injustice. Furthermore, they also realize that to be effective — to be leaders — they need to develop their own knowledge base and their own critical thinking skills. Thus they improve academically. They love the challenge to imagine how we can define ourselves and what this city can be.

Art alone, even prominent public art may not be able to inspire citizens, younger and older, to work toward spelling out a new vision for Milwaukee. Public art, however, can help to set a tone and suggest a vision. Fortunately we already have a start. Let’s acknowledge what we have going for us and take it to the next level.