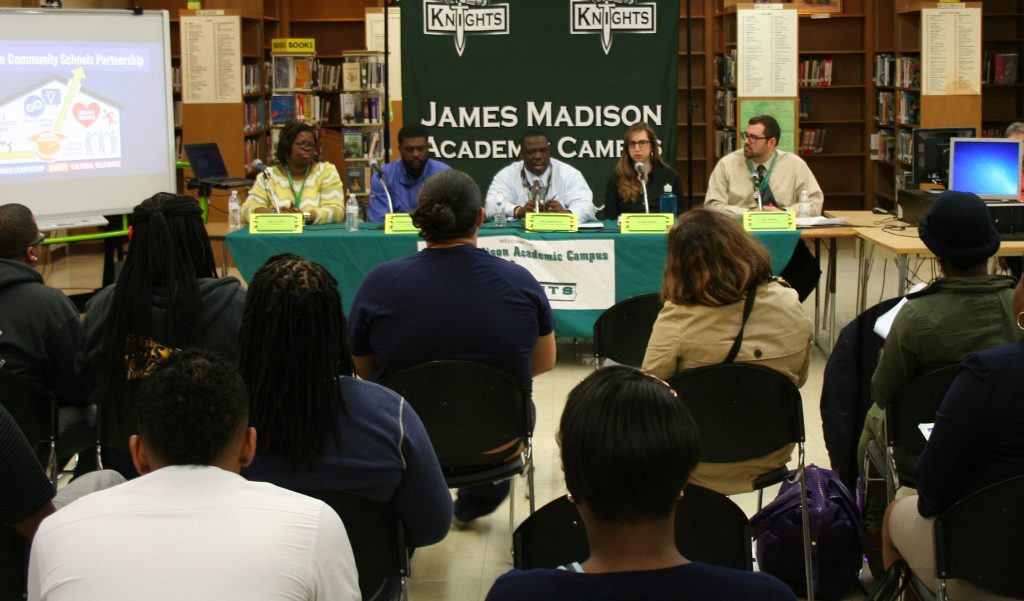 The model, which includes principles of shared leadership, high-quality and culturally relevant instruction, wraparound services, community engagement and restorative discipline, has produced positive results nationally. As part of a partnership with the United Way of Greater Milwaukee and Waukesha County, Auer Avenue, Hopkins Lloyd, Bradley Tech High School and James Madison Academic Campus (JMAC) have operated as community schools for about a year.

Since June 2014, MPS has “worked to develop and refine a comprehensive plan to improve student outcomes,” according to its website, that focuses on closing the achievement gap, educating the whole child and engaging school communities. The district is currently undertaking multiple reform efforts, including a multi-organization collaboration at George Washington Carver Academy and a “knowledge exchange” partnership between Casimir Pulaski High School and Carmen Schools of Science and Technology, an MPS charter school network.

The state legislation creating OSPP mandates that the commissioner identify between one and three schools the first two years and up to five in 2017-18 for transfer to charter or private voucher school operators. So far, no schools have been chosen. MPS officials and others have stated that the move could harm the district by reducing funding.

Means and Abele, who have said they would like to minimize the legislation’s impact on MPS, pitched the partnership as an opportunity to create a community school. Miller said the OSPP proposal “caused some real concerns,” including the idea of a school takeover and discrepancies regarding who would employ teachers.

“I’m always concerned when people say community school because, often, they’re just talking about wraparound services,” Miller said. “That’s only one component of it; the definition of community schools goes much deeper.” 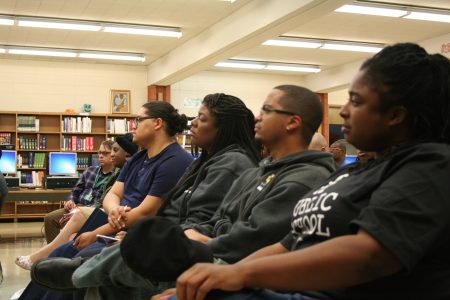 Ingrid Walker-Henry, a member of Schools & Communities United and an MPS parent, noted, “Around the country, most of the models that you see in urban areas are turnaround districts, recovery districts … and they haven’t really shown results. This (community schools) is something … that actually has shown results with children.”

In Cincinnati, since the introduction of Community Learning Centers (CLCs) in 2000, high school graduation rates have increased from 51 percent to more than 80 percent and the achievement gap between white and black students has narrowed significantly. Cincinnati Public Schools policy states that all district buildings will serve as CLCs; so far, 34 of 55 schools are functioning in that capacity. The Cincinnati Public School district calls its community schools CLCs; in Milwaukee CLCs refer to the almost 50 before- and after-school programs run in MPS schools by nonprofit organizations.

Jamaal Smith, a community campaign coordinator with Wisconsin Jobs Now, said shared governance is the most important part of the model because it gives the community a responsibility and stake in a school’s success. Teachers, parents, children and neighbors are included in decision-making through school councils, which function much like a school board.

During a recent event at the James Madison Academic Campus, Principal Gregory Ogunbowale said communities become stronger when they solve problems together. Invoking the African proverb, Ogunbowale said many of the students at JMAC “don’t have villages around them.” According to Ogunbowale, the solution is to “build a village around [them].”

JMAC has expanded its academic offerings, adding AP courses and special educational tracks in health sciences and finance, while partnering with local hospitals and banks. Students receive dinner and academic help at the after-school CLC, which is run by the Boys & Girls Clubs and City Year, an AmeriCorps program. Special courses provide intervention in reading and math for students who are behind.

District 2 Ald. Cavalier Johnson said it’s important to have those supports because hunger, stress, domestic conflicts and other conditions exacerbated by poverty make it harder for students to learn.

Lanisha Martin, who graduated from James Madison in 2006, said back then sports were the only after-school activities available to students. Martin, who took some college classes at MATC before dropping out, said if the CLC program were around when she was in school she would have been more involved in school and may have pursued a career in finance. “I really feel like I probably could be in a better position, or situation, right now,” said Martin, who became an organizer because many of her friends were killed as a result of gun violence.

“I want to be able to shift … the mindset of what we value,” said Morgana Matthews, an MPS parent whose three daughters have all attended JMAC. Her oldest child started in 2002 and the youngest is currently enrolled; the first two went on to college.

Matthews said she never had a lot of money but she bought books for her children and spent time teaching them to read. “We have to really evaluate who we are and what we want to instill in our children.”

The Milwaukee Community Schools Partnership, spearheaded by United Way, is trying to foster dialogue among stakeholders at each school through conversations about aspirations and barriers to success. The partnership’s director, Ryan Hurley, said trust is a “core component” of building a successful school.

Community school advocates say schools should be the “hub of a community,” and that providing families with information, support and access to quality educational opportunities in their neighborhood would improve outcomes while saving students travel time.

Because DPI data is not yet available for 2015-16 and the partnership has just completed its first full year, it’s still too early to say what the impact has been in Milwaukee. However, Hurley said there have been positive early results in attendance, academic gap closure and improved school climate.

Miller said he would like to see MPS fully commit to community schools, as have Cincinnati and Oakland. He is hoping more schools will be added next year, but he also said, “We’re taking it slow,” because the district wants to show possible investors that the model works.

“It’s not a magic solution, it’s not a quick fix,” said Hurley. “We know it’s a long-term strategy for investment.”

Considering the levels of poverty in Milwaukee, it’s “going to take everybody” to help improve academic outcomes, said Walker-Henry.

However, supporters have high expectations. Jessica Mirkes, who works with children at James Madison through City Year, said her goal is to change the perception of inner-city schools. Mirkes said she would “get a look” when she told people where she was placed.

“People know what that look is,” she said. “And I want that look to disappear.”