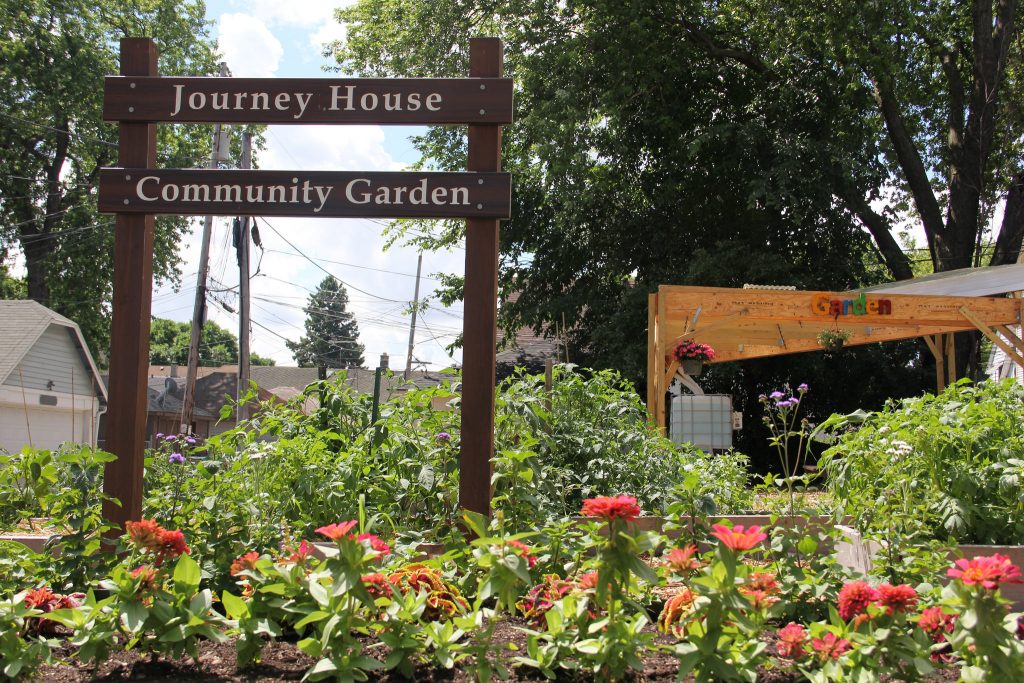 University of Wisconsin-Extension’s community gardens can be found in many city neighborhoods. Pictured is the Journey House Community Garden in Clarke Square. (Photo by Rebecca Carballo)

Randy Simmons, a North Side resident, was making his monthly trip to the food pantry at the House of Peace at 1702 W. Walnut St. when he saw a large truck that read: “Pick ‘n Save Fresh Picks Mobile Market.” Intrigued, he walked in and found the walls lined with shelves of produce, vegetables and meat, with a checkout counter in the back. 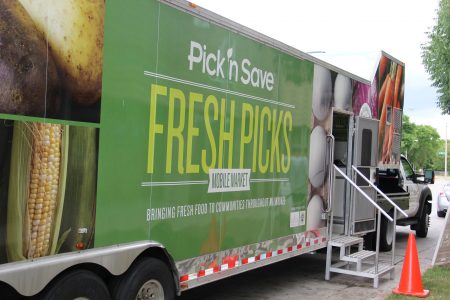 What appears to be a large truck is actually a traveling market that makes stops throughout Milwaukee County. (Photo by Rebecca Carballo)

Simmons said he would not use the mobile market in place of the food pantry. “The pantry is free. You can’t beat free,” Simmons said.

“I live right across the street and I was just being nosy and asked about it,” Johnson said.

Johnson said the mobile market is convenient and the prices are much lower than in a store. She said she plans to do her regular grocery shopping there.

Products are 25 percent lower than grocery store prices, according to Sherrie Tussler, director of the Hunger Task Force. She said the goal of the initiative is to make fresh food more available for residents of Milwaukee County.

“Hunger is not only about affordability of food,” Tussler said. “Hunger is about access to food.”

The mobile market concentrates on neighborhoods that do not have a grocery store within walking distance. Among the city stops are the Clarke Square, Amani and McGovern Park neighborhoods.

“We need to bust the myth that people don’t want to eat healthy; they do,” Tussler said. “They just need access.”

To make the market as accessible as possible, there are personal shoppers available for those who cannot easily get in the truck. 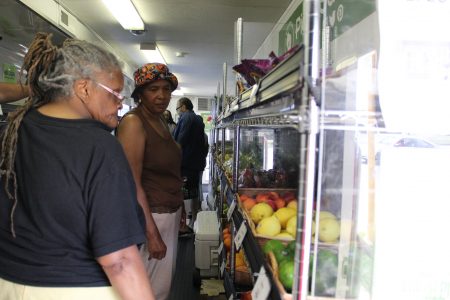 Shoppers browse through the produce section at the Fresh Picks Mobile Market, which carries vegetables, meat and other refrigerated items. (Photo by Rebecca Carballo)

The preserved food goes to food pantries and is used for the Hunger Task Force’s Stockbox program, which delivers food such as rice, cereal, juice, beef stew, pasta and vegetables to seniors free of charge.

The SEED Initiative also partners with University of Wisconsin-Extension’s community garden program, which includes city neighborhoods such as Clarke Square, Amani, Sherman Park, the Green Corridor and Bay View. Community members can rent a plot of land to grow whatever they like.

“We want neighborhoods to be involved,” said UW-Extension Food Systems Coordinator Ryan Schone. “When looking at sites we picked areas with a high level of community interest.” He added that it is ultimately up to the residents to care for the gardens.

He said residents choose to do community gardening because they may lack space in their yard or the soil might be contaminated with lead. Another big factor is the community-building aspect.

“People want to know their neighbors and who’s living across the street,” Schone said. “This provides an easy way to have organic conversation in a space that is safe and inviting.”

UW Extension’s goal is to create one million square feet of community gardens in the county. Schone expects it will reach the goal by the next growing season.