You are here: Home / Home / Carousel / Community leaders say Milwaukee ‘can’t police’ its way out of violence
Share this... 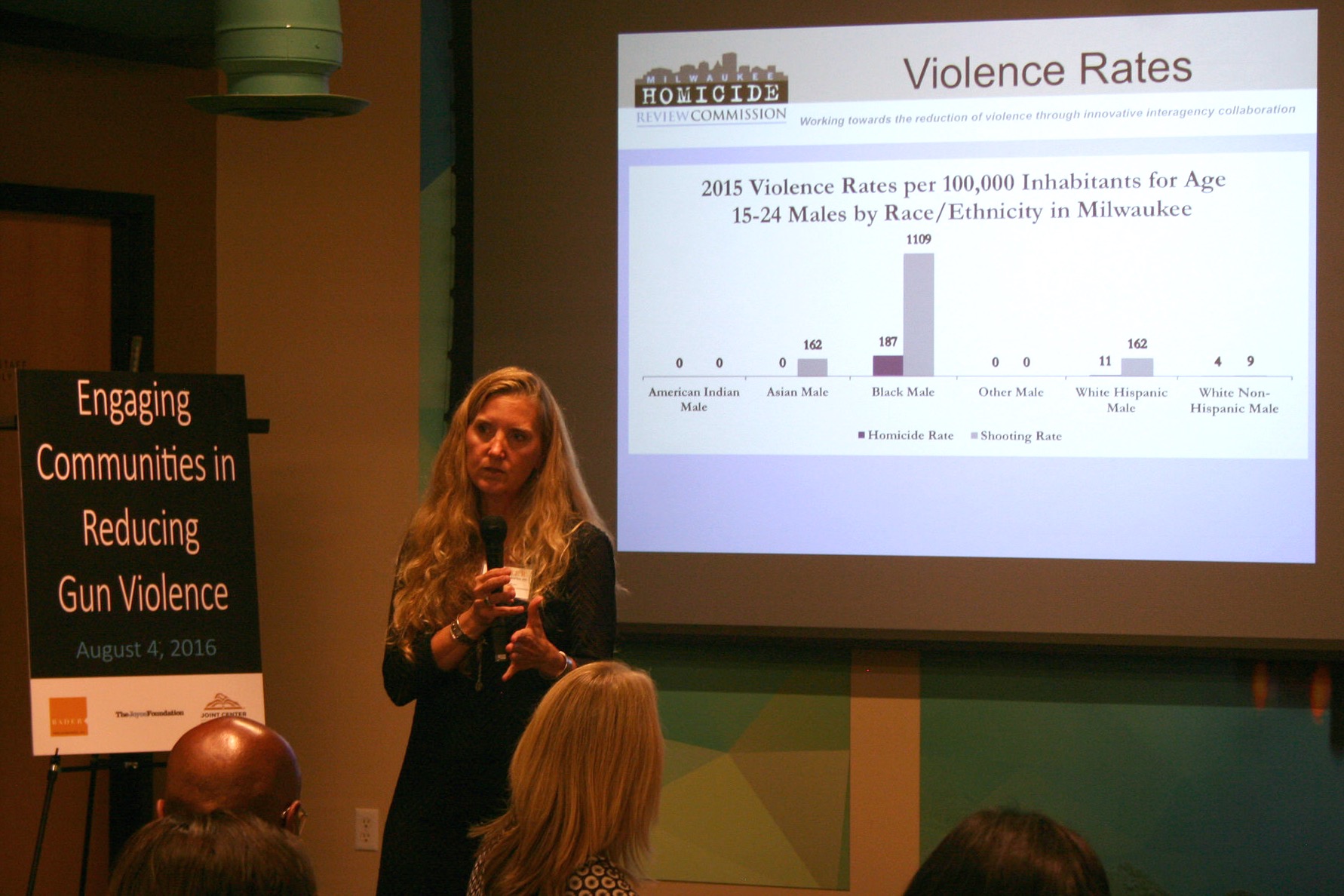 Local leaders called for a comprehensive solution to gun violence in Milwaukee during a recent conversation exploring strategies to combat the issue. The solution, they said, must address the root causes of violence.

The group gathered as part of a project by the Joint Center for Political and Economic Studies, the Urban Institute, and the Joyce Foundation, and included representatives from the Milwaukee Police Department (MPD), Wisconsin Department of Justice, Milwaukee County District Attorney’s office, Running Rebels, the Greater Milwaukee Committee and the Bradley Foundation.

The project’s goal is to give voice to communities hit hard by gun violence, and look at the issue in a holistic way, according to Spencer Overton, president of the Joint Center for Political and Economic Studies.

The recent discussion, hosted at Bader Philanthropies, followed up an earlier meeting in November. Leaders focused on recommendations from the previous meeting and a national survey on gun violence and perceptions of law enforcement.

Reggie Moore, director of the City of Milwaukee Office of Violence Prevention (OVP), praised the work that has been done. However, he said those recommendations need to be “part of a bigger strategy” and stressed the need to develop a comprehensive, citywide anti-violence plan. He said OVP will begin to develop that plan by asking for feedback from the community, particularly those affected by violence. 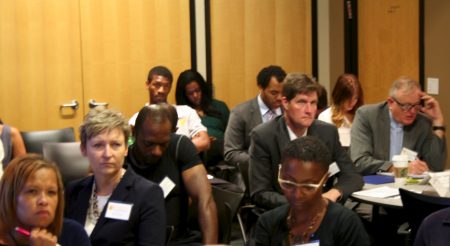 The Joyce Foundation commissioned a nationwide survey by the Beneson Strategy Group to better understand the views of gun violence in communities of color. It was also designed to gauge reaction to possible solutions and gain insight into the gun violence, policing and mass incarceration.

“We are in the midst of a national conversation in this country around policing, and the criminal justice system, and gun violence … and I think this research really should help inform that national conversation,” said Nina Vinik, program director of the Joyce Foundation’s Gun Violence Prevention Program.

Vinik added that the findings create an opportunity for “nontraditional allies and partners to join together to address these issues more comprehensively.”

She said the survey, which was released in April, showed that African-Americans and Hispanics experience these issues personally. Most have a personal connection to someone who has been sent to jail, prison or another correctional facility and young people are disproportionately affected.

Fifty-seven percent of African-Americans and 45 percent of Hispanics believe that most Americans don’t care about the gun violence affecting communities of color. Those numbers were even higher among 18 to 29 year olds. High percentages of both groups expressed concern about interactions between police and young men of color. Only 47 percent of black people agreed that an individual won’t have problems with police if following the law.

Despite those concerns, the survey showed that only 8 percent of African-Americans and 4 percent of Hispanics said police make their community less safe, a finding questioned by Zeynab Ali, a former City of Milwaukee Youth Council representative and founder of Inspirational Impact.

“It just didn’t make sense that African-Americans … didn’t feel uncomfortable with the police being present in their neighborhoods,” said Ali. She said that number would be much higher if youth in Milwaukee were surveyed.

“I think it probably would’ve been a little bit better if it would’ve been more focused on specific neighborhoods that were most impacted,” said Alan Schultz, a co-chair of Community Uprise at UWM and a member of Ex-Prisoners Organizing.

Milwaukee’s poverty rate of 29 percent is almost twice the national average. Almost 40 percent of the city’s black population and more than 31 percent of Hispanics live in poverty. In 2015, there were 145 homicides and 633 non-fatal shootings, according to data from the Milwaukee Homicide Review Commission. Violence rates were highest among those two groups.

Because of that, Milwaukee NAACP President Fred Royal said there needs to be a more robust discussion about providing resources to those areas that are affected. He said the discussion should address the economic impact of fatal and non-fatal shootings, including the loss of productivity, unemployment and health care and other support costs.

“When you look at the economic impact of this, there should be some political will to get things done,” Royal said.

Mallory O’Brien, founding director of the Homicide Review Commission, said tracking data has helped significantly reduce homicides citywide. The commission has developed recommendations and strategies to prevent violence, including mediation and intervention in communities and consistent programming for youth.

Similar strategies have worked elsewhere, including Gary, Indiana, where homicide rates and non-fatal shooting rates are down.

The president of Bader Philanthropies urged those at the meeting to work together to solve larger issues. Dan Bader said he hopes philanthropic resources will be better targeted and “aligned” moving forward.

Moore said increased philanthropic funding will be beneficial but he added that the public sector — the city, state and county — “has to step up.” “There has to be an equitable balance to what we’re investing in prevention versus enforcement,” he said.

“We can’t put $50,000 into this and expect a population-level change that we want to see in this community,” he said. “There has to be a significant shift in resources.”

Mayor Tom Barrett’s office did not respond to a request for comment.

Ali said, “I think it’s just a matter of us taking action.”